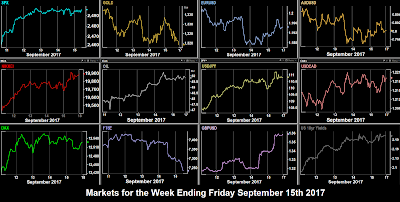 The world was expecting a North Korea missile test over the weekend on their National Day and didn’t get one. Also Hurricane Irma turned out not to be as bad as feared. So markets rose sharply on Monday, and SPX made a record close. Other indices were also sharply up. USD followed the sentiment and had a good day. Gold and JPY were down against the dollar, classic risk-on, as were AUD, EUR, and GBP and 1-year bond yields were up. Only CAD was up, after the Housing Starts beat we mentioned last week, and a rise in Oil.

The momentum in equities continued on Tuesday. Watered down UN sanctions on North Korea (to achieve China and Russia’s votes) were taken as further tension relief by traders. SPX, NKY and DAX were up again, the first making another record closing high of 2496. Only FTSE bucked the trend reacting to stronger GBP, which put on 120 pips (0.91%) on the day after the UK inflation beat (2.9% vs 2.8% set) and 0830. Once again, Cable front ran the print. In currencies, there was a mixed picture. In general we had turnaround day, with Gold and most currencies posting a reverse candle to that of Monday. The exceptions were JPY which continued to fall, and bond yields which rose again. Oil was slightly up, ahead of the API print at 2030 which was worse (6.18M) than last week (2.79M)

After two good days, Wednesday was more or less flat for equities, although the SPX put on two handles to close at 2498, another record, despite a 0.8% drop in AAPL after traders were underwhelmed with the $999 iPhone X and cellular watch launch at 1700. DXY touched a one-week high as it rose sharply (0.7%) against EUR and 0.4% against JPY. AUD and Gold were similarly down, and yields were again up. The unusual thing was the sharp rise in USD came at a strong but steady pace immediately following the Producer Price Index miss (0.2% vs est 0.3%, prev 0.1%). This is still a rise from last month, and perhaps this figure was seen as front-running Thursday’s inflation figure, a fact we alluded to last week. The exception, again was CAD, which benefited from a steady bid in Oil all day, despite the EIA stock miss (5.88M vs 3.23M) at 1430. This miss was not as bad as the API print the day before had predicted of course.

Thursday saw another slow day for equities. Although the SPX did hit another intraday high it closed lower, and in general indices were flat. Like Tuesday, the exception was the FTSE which faded 83 points (1.12%) on GBP strength after the BoE rate decision. The decision was a hold (0.25%) and the votes were as expected, but hawkish comments from Governor Carney saying rate rises “may be as early as in the coming months” added an immediate 97 pips (0.73%) and a total of 186 pips (1.41%) on the day. AUD was surprisingly only slightly up after the stellar jobs print of 54.2k, equivalent to an amazing 731k in US NFP terms. Of course AUD is already up 9% against USD since May, and at two-year highs.

There was a relatively muted reaction to the US inflation beat (1.7% vs est 1.6%). at 1230, the first important US release of the week. Maybe this is because the estimate had been downgraded, it was set at 1.7% as we reported last weekend. The net result of all this was downward pressure on USD with the usual exception. Gold was up and USD was down against all currencies except CAD, which dipped briefly but ended the day slightly up, which is where Oil also finished.

Friday saw another North Korean missile test, mentioned as a response to sanctions, but who knows what Chairman Kim is thinking. However the “boy who cried wolf” factor seems to have set in, traders now seem to have a “missile fatigue” and SPX finally closed about the psychological 2500 mark, setting yet another all-time high. This was despite the strong US Retail Sales miss at 1230 (-0.2% vs +0.1% estimate), although some commentators put this down to a Hurricane Harvey blip. In natural disasters, overall spending is higher, but not at first. The immediate emergency must pass before reconstruction spending can start.

The risk-on indicators for the day (lower Gold, lower JPY) were present, and NKY was also up. However DAX was down, possibly because of a recovering EUR, and FTSE was sharply down again, definitely because of further gains in GBP. Cable repeated Thursday’s gain exactly, putting on another 1.40%, to make 3% on the week, and close at 1.3589, the highest level since the Brexit vote and crash. This was because of comments made by Gertjan Vlieghe, regarded as the most dovish of the UK MPC who echoed Carney’s sentiments, even using the exact phrase we have quoted. Remember that the current rate is 0.25%, lower than the 0.5% which held for all the years following the 2008 crash, so talk of [a programme of] rises, in the plural, is more significant than a mere return to 0.5%.

DXY was down on the day because of this, and EUR strength, and AUD was also up. CAD gave up some of its gains, Oil was flat, but 10-year US yields were slightly up.

These are the prices movements for the week on the instruments we cover. The best trade of the week would have been GBPJPY up 5.54%, an outstanding forex result for one week. The strongest index movement was again NKY, but buying Oil would have been better at 4.77%.

This is central bank week, with reports from the RBA and ECB, and the all-important Fed rate decision, followed by the BoJ decision a few hours later. There is little to report over the weekend.

Monday sees BoE Governor Carney speak in Washington DC at 1500, although a lot of the action is already behind him. The main calendar release is Eurozone inflation where the MoM figure is expected to recover to +0.3% from -0.5% last month.

Tuesday has RBA Minutes in the Asian session, and a speech by Rep Gov Lane from the increasingly important BoC at 1815. News is otherwise light.

Wednesday is Rosh Hashanah, the Jewish New Year, and main event of the week, the Fed rate decision. The CME FedWatch tool has a 98.6% likelihood of a hold (the other 1.4% is for a cut!), so as usual traders will be following the comments. This month, in a change to usual procedure, there is a FOMC Economic Projections report issued at 1800 along with the rate decision, and the press conference is 30 minutes later. Last week’s CPI was finally upbeat, and commentators are expecting some indication of balance sheet reduction. With USD recently at 33-month lows, expectations are to the upside.

Thursday’s Asian session sees the BoJ rate decision, hot on the heels of the Fed. A hold is expected. Note the press conference is four and a half hours after the rate is revealed. It is unlikely that this will overshadow the Fed, whose effects normally run for several days. UK PSBR will give us the chance to see if GBP front-runs the print, as it does for so many releases.

Friday has some PMI releases, but the main calendar event is Canadian inflation. The estimate of 1.5% is a big step up from last month’s 1.2%. Remember of course that the Canadian rate hike has already happened, so a miss could halt CAD’s recent strong run. In the US, the Trump administration is scheduled to release some tax reform plans. We also have a range of Fed speakers Williams (centrist) at 1000, George (über-hawk) at 1330 and Kaplan (slight dove) at 1830, however their effect may be muted so soon after a rate decision.