USD is rising post-Trump, or is it?

On the weekend after the Trump victory, we have seen a huge increase in equity prices, with the DJIA reaching an all time high. This was to be expected with an across-the-board Republican victory, not only winning the White House but both houses of Congress. However, what was not expected from a protectionist was a rise in the value of the dollar.

The initial panic spike sold the indices and the dollar. If we take Brexit as a comparison, the indices quickly recovered but the currency (GBP in that case) didn't. So what happened in America?

Well, the resolution of uncertainty was likely to favour USD, whoever won, mainly because risk is reduced. But Trump’s infrastructure development plans, to create jobs, and his tax cuts, are perceived as inflationary, hence why USD is rising contrary to the view of many pre-election pundits. Trump’s five minute off the cuff acceptance speech seemingly transformed him from huckster to statesman in an instant, making his plans realistic, especially given the all Republican government.

It is obvious why this is good for equities, and better for the DJIA than the SPX, better for the SPX than the NDX and so on. Building schools, hospitals and roads, and increasing insurance profits by abolishing Obamacare is great for the giants in the DJIA (including the banks that fund them), but doesn’t help the tech industry at all. Trump wants to tighten immigration and cut taxes. Silicon Valley pays little tax anyway, due to the 'cyberspace' location of it's business, but more tellingly 37% of it's workers are non-citizen immigrants.

It is less obvious that Trump is good for USD. So we have to ask - is USD actually rising? Or is it just that other currencies are falling.

Remember US protectionism is per se bad for other countries. If Trump raises tariffs, then to maintain competitiveness, foreign currencies have to fall. We already know about Trump’s whipping-boy MXN, but EUR is suffering a similar fate, as TTIP, nearly completed, is now likely to be cancelled.

Japan of course is a huge exporter to the US, so naturally JPY fell, rumoured to be assisted by a BoJ dollar purchase.

By contrast, the one country the Brexit-loving President-elect has moved from the back to the front of the queue is the UK. This indicates an economic oxymoron;  a union of isolationists. GBPUSD has soared 2% , EURGBP has given up 5% this week. The British Europhile tourist paradoxically has Trump to thank.

The final test should be on another isolationist currency, with little skin in the game, the obvious candidate being the Swissie. USDCHF has finished the week only slightly up, and 100 pips below it’s October high.

This DXY chart, for the last 30 days, shows that USD across the board appreciation is far from clear. Of course most of DXY's weight is EUR and JPY. 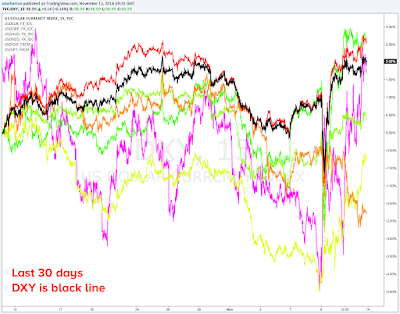 One can imagine Trump finds resonance in Gore Vidal's quote "It is not enough that I succeed, everyone else must fail". Don't forget Vidal's most famous quote is "Never pass up a chance to have sex or appear on television".

I'll leave you with this YouTube clip
Posted by David Atherton at 09:12 No comments: Links to this post