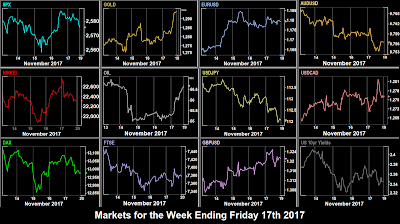 NKY fell 1.3% in the Asian session on Monday partially giving up spectacular gains in previous weeks, but also affected by the continuing oil price rise. Japan imports all its oil. Otherwise it was fairly flat for indices after the previous week’s red candle. Nevertheless, SPX managed a 0.1% rise despite the 7.6% drop in GE after they announced a dividend cut. DAX fell sharply, down 165 points at one point, and breaking the psychological 13,000 barrier. However it recovered in the US session to close only 18 points down on the day.

Currencies only moved slightly, and were mixed. DXY was slightly up (0.11%) on the day and 10-year yields advanced 1bp, but this belied a mixed picture. EUR was up a little, JPY was flat, GBP fell 0.5%, and AUD and CAD were notably down. Gold and Oil were also flat.

Tuesday was another weak day for equities, and all indices fell, in particular DAX which was reacting to a strong Euro.  Markets also reacted to a sharp drop in Oil, down 3% on the day, and further weakness from GE, the SPX and DJIA’s oldest component. EUR had its best day for months, up 1.13% after German GDP beat expectation at 0700 and Eurozone GDP held as expected at 0.6% at 1000. GBP also rose 50 pips (0.4%) on the UK CPI beat at 0930. The risk-off in equities was confirmed by the classic rises in JPY and Gold, and fall in yields. Only AUD and CAD failed to make progress and were flat on the day.

The equity downtrend continued on Wednesday, with all indices lower. Analysts cited high PE ratios (important) and uncertainty about the slow progress of the tax reform. In particular the SPX recorded its biggest one day drop in ten weeks, although this was only 0.6%, but the VIX touched its highest level since mid-August.

Currencies were again mixed, despite the beats on US Retail Sales and CPI at 1330. GBP and JPY were slightly up, and yields were down. However, EUR gave up a little ground after an early spike to a one-month high, and AUD and CAD were down again, as was Gold. Oil was flat on the day. AUD in particular fell sharply (53 pips) on the big Consumer Confidence miss (-1.7 vs +3.6) at the Asian session open, and this fade held all day.

On Thursday, the House of Representatives voted to approve their version of the tax bill, and this turned the trend in equities. SPX was up 0.8%, erasing the week’s losses, and other indices followed suit ,and bond yields were up. It was not completely risk-on, as although JPY only faded slightly, and Gold was even slightly up on the day. DXY was almost flat (0.09% up), because EUR was nearly flat (after the Eurozone CPI came in as expected at 1000), and GBP and CAD advanced. AUD and Oil were flat on the day. The Australian payrolls miss at 0030 (3.7k vs 17.5k) had surprisingly little effect.

Friday was option expiry day. The reversal in indices was short-lived, and the downtrend resumed — SPX was down 0.3%. FTSE manage to remain flat, perhaps on the ramp in Oil, which nearly recovered all Tuesday’s losses, possibly because of option expiry and rollover, although there was remarkably less contango this time. This was put down to fresh news that US Special Prosecutor Mueller has issued subpoenas to several of President Trump’s campaign officials.

In line with this, Gold, JPY and bond prices (the inverse of yields) were up, as were EUR and GBP. CAD fell sharply after the CPI print came in as expected at 1330, giving up 0.5%, although most of this was recovered by the end of the day. Nevertheless, CAD and the beleaguered AUD ended the day down.

So in summary, a risk-off week seeing appreciation in Gold, JPY and bond prices, and a clear separation between EUR and GBP advancing, and AUD, NZD and to an extent CAD fading. However, despite a change in sentiment from, say, two weeks ago, SPX only fell 0.18% on the week, and is still up on the month.

These are the prices movements for the week on the instruments we cover. A risk-off week with JPY and Gold both up, and all indices down, but otherwise a mixed picture for USD. A bad week for AUD and NZD, and the best forex trade would have been to buy EURNZD, up 2.74%. After four weeks as the strongest riser, it is not surprising that NKY fell the most this week.

The holiday season starts this week, and data is light, and the FOMC and ECB Minutes will be the main events.

Tuesday sees the RBA minutes, and also a speech from Governor Lowe. AUD touched a five-month low last week. Traders will be wondering how low it can go. The monthly GDT milk auction has had little effect on NZD recently, but give the currency’s recent strong move to the downside, again this is one worth watching.

Wednesday is a bit busier, with the UK Budget statement, although this is primarily a tax change bill, and nothing major is expected, except in the area of housing. Volatility will probably be limited to UK Housebuilding stocks. The FOMC minutes will be keenly watched. The current consensus on the CM FedWatch tool is a 96.7% chance of a hike in December. Any dovish remarks which put this in doubt could therefore put negative pressure on USD. The US Durable Goods print is not expected to produce much volatility, given its proximity to the Fed minutes.

Thursday is Thanksgiving and US and Japanese markets are closed. (Japan call it Labor Thanksgiving Day). Trading is therefore expected to be very light. Focus is of course on Europe, with UK GDP and then the ECB Minutes. The latter is the big event, watch for EURUSD volatility all day. There is also a rate decision on the South African ZAR, 6.75% hold expected.

Thanksgiving is followed by Black Friday, the retail bonanza. Expect bullish announcements from AMZN even before the end of the day. US Markets are open, but expect reduced volatility as many traders make a long weekend of the holiday, and data is light.