Week to May 4th 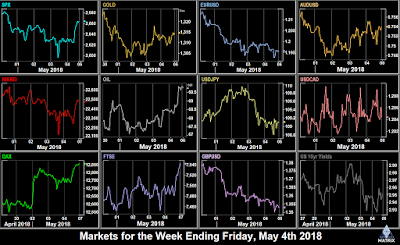 Monday April 30
Some people claim that the new moon has a negative effect on market. It certainly co-incided with a top, as last week’s rally was sent into reverse. All indices were down (including the futures on NKY which was closed), not helped by a series of economic print misses on German CPI (1200), US PCE (1230), the Chicago PMI (1345) and US Pending Home Sales (1400).  MCD beat earnings estimates

The dollar on the other hand continued to rally, and all other currencies and Gold receded. The effect did not translate into bond yields, which remained flat on day at 2.95%. Oil rose on speculation that Israel’s “proof” that Iran had been developing nuclear weapons may lead to fresh US sanction.

Tuesday May 1
Equities were flat on the first day of the new month, with SPX 0.3% up and DJIA 0.3% down because PFE feel 3% on an a revenue miss. After the misses on UK Manufacturing PMI and Mortgage Approvals at 08:30, FTSE was slightly up but only because of a sharp (1%) fall in GBP, and DAX was closed.

Another strong day for the dollar pushed other currencies, Gold and Oil down further, the latter giving up the previous day’s gains. Yields were up in line, adding 4bp but still staying under 3%. AAPL beat earnings expectations and rose 5.2% in the after-hours market.

Wednesday May 2
Equity markets were again down across the board, perhaps the new moon or the ‘Sell in May’ effect coming into play. The exception was DAX, which broke through the 12650 resistance barrier, and shot up nearly 200 points, helped by the Eurozone Manufacturing PMI beat at 08:00, a 4.42% rise in IFX.DE (0.98% of DAX), and of course the continued decline in the Euro.

After continuing its upward trend earlier, USD fell slightly after the FOMC rate hold. Although the comments were upbeat, they weren’t hawkish enough. Nevertheless DXY still added 0.3% for the day to close at a 2018 high of 92.73. AUD and JPY were flat, as were yields, but the other currencies fell. (AUD had rallied in Asia, but gave it up in Europe). There were EM problems today, TRL and ARS fell sharply, despite a 3% emergency base rate rise in Argentina. Oil rose slightly after the previous day’s fall. TSLA fell 8% AH after poor results and a ‘car crash’ earnings teleconference.

Thursday May 3
Markets suffered an early upset today with SPX and DJIA both dropping sharply (around 1.5%) at the open and pushing below the 200-day simple moving average for the first time since July 2016. Other indices follow suit, although all quickly recovered. The drop was primarily a build-up of sentiment, but may have been fallout from the Fed announcement, as the economic prints for the day were fair, although the TSLA and AIG (also a miss) earnings results did not help.

The dovish Fed was probably also responsible for stalling the dollar’s rise. DXY was flat on the day, with Gold and all currencies except GBP advancing. Sterling continues to decline as traders now doubt that there will be rate rise next week. Oil also dipped with indices but ended the day up on the weaker dollar. TRY and ARS fell further. Yields were down two more basis points to 2.95% 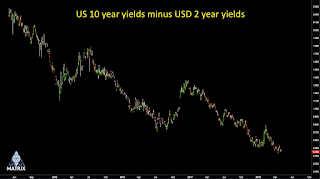 DXY made another 2018 high, making a weekly gain of 1.2%, and the best two-week performance since the election. This was mainly down to EUR and GBP continuing to fall (GBP is down 4.75% since BoE Governor Carney warned that rates may not increase in May), as JPY and CAD were flat, and AUD even managed a slight increase. ARS finally stopped falling, but only after Argentina’s central bank raised rates to 40%! (from 27.25% last week). Inflation in Argentina is “only” 25%. TRY continued to fall (down 10% in 2018). Note also that PLN and MXN have fallen more than 4% in the last four weeks. After a dip in early trading, yields were flat on the day. Note that the 10-year/2-year differential continues to close, finishing the week at a multi-year low of 4.5bp.

A third green weekly candle in DXY saw the basket break the 200-day simple moving average (SMA200) and briefly push through the 50-week average. All currencies receded, particularly GBP on (lack of) rate hike concerns, which closed under its SMA200. Shorting cable would been the best forex trade. CAD has been noticeably flat, staying in a 100 pip range now for two weeks.

The weak Euro boosted the DAX to top performing index, but, as is often the case, Oil was the overall best performer in the markets we trade.

Cryptos continued their recovery, with Ethereum outperforming Bitcoin for a second week.

Monday May 07
As is often the case, Monday is quiet, and note that Australia, the UK, Thailand and South Korea are closed. Fed speakers are Quarles at 23:00 Sunday, Bostic  at 12:25, Barkin at 18:00, and finally Kaplan at 19:30. All are centrists, and all except Kaplan are voters. BoC Lane speaks at 19:00. NAFTA talks resume today. Although this week is still earnings season with 1,493 companies reporting, all the index-moving stocks have now filed.

Tuesday May 08
The only possible area for surprise is the Australian budget, in another quiet day. RBA Boge speaks at FX Week Australia at 23:00 Monday. No Fed speakers today, but ECB Lilanken (hawkish, non-voter) is on at 14:00. DJIA component DIS (2.87%) reports after the bell.

Wednesday May 09
One Fed speaker today, Bostic again at 17:15, and the first of two rate decisions, with the RBNZ decision at 21:00 after the US market closes. A hold at 1.75% is expected, and it will be interesting to see if the press conference, or Governor Orr’s speech three hours later arrests the slide of the kiwi, down 5% in the last three weeks. BKNG (formerly Priceline), which is 1.36% of NDX, reports after the bell.

Thursday May 10
Today is clearly the biggest day of the week with the all important BoE rate decision. Sterling is down 4.75%, below SMA200, and oversold, since Gov Carney warned that a rate hike was not a certainty, so if there is a rise, expect the currency to turn very sharply upwards. Alternatively, it remains to be seen whether a hold is fully priced in. Current sentiment from commentators is fairly evenly split.

Following 90 minutes later is the US CPI print. A lower core (ex Food and Energy) print is forecast, down to 1.9% from last month’s 2.1%. Remember the Fed’s target is 2%. Note there is also Chinese inflation today. Norway, Sweden and Switzerland are closed today. NVDA, maker of crypto mining chips, and 1.874% of NDX, reports after the bell. 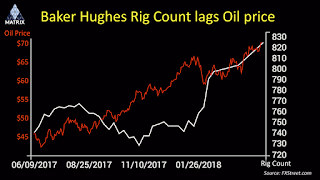 Today we have the Canadian jobs report, which, for once, is a week later than US NFP, so the volatility in the loonie will be there, but less pronounced. The estimate of 36.1k is higher than last month’s actual, and equivalent to 324k in the US, who have nine times the population. USDCAD actually had a weekly death cross last week (50wk MA crossing below 200wk MA), ie a golden cross for CAD. It remains to be seen whether the currency can continue to outperform its European counterparts. We then go into the weekend where the US makes the important decision on whether to continue the waiver on Iranian sanctions. As always the week closes with the Baker Hughes Rig Count, which as you can see, continue to rise as the price of Oil