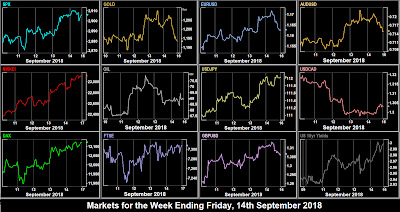 Monday Sept 10
After posting red candles every day last week, SPX recovered (as shown on our chart last week) and managed a modest 0.2% gain. DAX and NKY were more firmly up, as Italian stocks and bonds recovered, with the MIB adding 2.30%, its best day since April 2017, after comments about prudence from the Italian economy minister. Only FTSE was red, reflecting a fall in Oil and a strong (0.79%) rally in GBP following positive comments from EU negotiator Barnier, and the UK GDP (0.3% vs 0.2%) and Trade Balance beats at 08:30. EM currencies TRY, ARS and RUB fell again, but the overall picture for USD was weak with DXY giving up 0.29%. All currencies rose, except JPY which pulled back on the risk on mood. Gold was flat, and US 10-year yields fell 1.5bp in line with the fading dollar. The Swedish election result had little effect on either SEK or EUR.

Tuesday September 11
After a shaky start both in Europe and in the US, indices recovered, leaving SPX slightly up, and DAX and FTSE, which close earlier, slightly down. NKY NKY did better, reacting to the falling yen, as you can see from our main chart, the week’s price action for NKY and USDJPY is very similar. Generally positive news, such as the JOLTS jobs beat at 15:00 was tempered with tariff concerns.

The big story of the day was Oil, which added 3.54%, its best day since June on a combination of Hurricane Florence concerns, sanctions on Iran, forecasts for lower US shale production, and a stellar beat on the API stock level (-8.64M vs -1.20M last week). We sometime have to search for reasons [for price moves], and sometimes we have too many of them!

It was a flat day for DXY, with EUR and GBP relatively quiet (despite the jobs and average earnings beats in the UK at 08:30), and the small fall in JPY (13.6% of DXY) being balanced by a slightly large move up in CAD (9.1%), probably following the Oil price, as the only Canadian data of the day, Housing Starts at 12:15 missed. Gold was also flat. It was therefore surprising to see yields rise 4bp on the ten and two year notes. This was probably due to a $35Bn 3-year auction which raised 2.821%, the highest since May 2007. Italian and German 10-year yields were also up substantially.

Wednesday September 12
Today was fairly flat day for indices, with SPX and NDX moving down very slightly. NKY was also flat. DAX and FTSE posted modest gains, although the former lost these in post-market futures. FTSE held on to finish green, as Oil continued to rise, pushing through the psychological $70 mark after the EIA beat at 14:30, and BNO touching $80 for the first time since May. It was another down day for USD, and this time JPY came into line, so all currencies were up against the greenback. Gold had its best day this month adding nearly $8 (0.65%) and yields fell 1.5bp, both in line with the across-the-board dollar move, not helped by the Core PPI (CPI proxy) miss at 12:30. AUD was particularly strong, in line with the Gold rally, proving again the strong intermarket link between these two instruments.

Thursday September 13
Today was the best day for stocks this week, as China welcomed an invitation to hold fresh trade talks, which traders interpreted that the $200Bn package may be delayed. US markets rose substantially, with SPX adding 0.6%, its best day of the month. NKY had a similar rally, following a weaker yen, which did its usual risk-off thing. NKY/USDJPY divergence is often seen in the Asian cash market, but when the US market is open, the NKY futures contract is closely correlated with USDJPY. DAX and FTSE were more or less flat, after a clear rally in EUR and GBP.

Overall, the currency situation was very much like Monday. DXY pulled back 0.28% after the important CPI print at 13:30 missed (Core 2.2% vs 2.4%). Interestingly, the normally important BoE and ECB rate decisions (11:00 and 11:45, hold, as expected, in both) made little difference to GBP and EUR, their sharp upward moves came later on the CPI print. Similarly, AUD also reacted much more strongly to US CPI that its own jobs report beat at 01:30.

JPY rallied very slightly at that time, but quickly assumed its risk on fade, and ended up down 0.6% on the day at a two-week low. Gold faded with equity risk-on, rather than follow the dollar. Oil pulled back, giving up some of the previous two days gains. The Turkish central bank raised rates by 6.25% to 24%, and TRY rallied 4.22% on the news, although still lower than the price two weeks before.

Friday September 14
Although retail sales missed at 12:30, the previous month was revised upwards, and the Michigan Consumer Sentiment Index beat, and broke through 100, the original 1966 base. This was enough for another equity rally, particularly with NKY which reached to a new seven month high. US and European indices also rallied, but pulled back (after the European close) when President Trump confirmed the $200Bn China tariffs at 16:00. SPX promptly dropped 12 handles and DJIA 143 points. Some of this was recovered later in the session, and added to the earlier gains, SPX, DAX and FTSE all closed green.

Following Turkey, Russia raised rates today, and RUB added 0.48%. With the lighter EM mood and positive stock sentiment, DXY was up 0.42%, and rose across the board, with all currencies and Gold retreating. Yields rose in line, and briefly broke the 3% psychological barrier, to settle at 2.998%, up 3bp on the day. Oil was flat on the day.

A downturn for DXY this week (-0.41%), and a reversal of last week’s situation with an increase in all currencies except yen, and indices up. The good news for sterling made buying GBPJPY this week’s best trade. The outstanding index was NKY, which had its best week since March and was this week’s best index trade. Cryptos were unusually stable this week, with BTC in its narrowest range (6.19%) since the crash in January. ETH touched its lowest price in over a year. In FAANGs, NFLX outperformed against a fairly flat performance from the others.

Monday September 17
US-Canada trade talks resume today, with Thursday being a deadline for the final report on Sep 30. The $200Bn China tariffs confirmed on Friday could start at any time. The NY Empire State manufacturing index print is at 12:30, but the only important news of the day is Eurozone CPI, and even this is usually a non-event, as the constituent countries have already reported.

Tuesday September 18
No important US releases today. The minor Redbook Index (a proxy for Retail Sales, which was released last week and is itself a proxy for CPI) is released at 13:55. In the EM arena, there are new polls out for the presidential race in Brazil, and a rate decision on HUF from the MNB (Magyar Nemzeti Bank, Hungary’s CB). HUF is down 7.89% against USD so far this year, although it is off its lows. Hungarian CPI is also released today. There is a small possibility of some trade dialogue between China and the US at UN meetings held today. North and South Korea start a two day summit. ECB President Draghi speaks at 07:15. The RBA minutes are unlikely to surprise.

Wednesday September 19
Today is this week’s big day for news. In EMs we have South African CPI at 08:00, the Brazilian rate decision at 17:00, and Argentina GDP at 19:00. The reason we watch these during the current EM crisis is contagion theory. Very bad news from any EM country can precipitate severe moves, which in turn can be reflected in other EM currencies. If the contaminated currency then has further bad news and, say, breaks a key support level, a chain reaction can occur. In mainstream markets, again the US is quiet. The key news of the day is UK CPI, although this is muted as the UK rate decision was last week. BoE Chief Economist Haldane speaks in Estonia at 08:00. 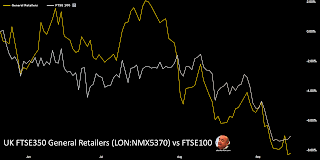 The Japanese LDP (ruling party) leadership election (by members of parliament) is held today. It is likely that Shinzo Abe will retain the job, but if he didn’t, look out for volatility in JPY and NKY. Three rate decisions today in Switzerland (07:30), Norway (08:00) and most importantly South Africa (13:00). ZAR is down 29.4% from the 11.50 high at the beginning of March. It is also the practical deadline for Mexico to agree NAFTA terms (like Monday was for Canada). ECB Praet speaks at 17:20. UK Retail Sales will be watched closely, given recent dire reports from Debenhams (LON:DEB) and John Lewis (private). The FTSE 350 General Retailer index has been falling heavily since mid-July.

Friday September 21
There’s nothing on the calendar today other than the releases., which are mostly Markit PMIs. Canadian CPI and Retail Sales (the same thing) may provide some CAD volatility. Of course for the previous two Fridays, President Trump has hit the markets with tariff announcements. If he does so today, it is more likely to be about NAFTA than China. Apple’s new iPhones are released in-store, cue lines outside shops … or not.