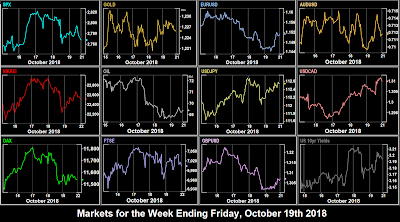 Monday October 15
US and Asian equities continued last week’s slide today, starting with the Chinese CSI300 dropping 1.3%. SPX and NKY ended down on the day, not helped by the big miss (-0.1% vs +0.3% est) on US Retail Sales at 12:30. Saudi Arabian tensions over the Khashoggi affair weighted, and the US sell-off came after the European markets closed, leaving DAX and FTSE positive on the day, in fact DAX added 0.8%, perhaps because Italian bond yields stabilised. Saudi worries also affected DXY which was down 0.32%, with all currencies advancing, even GBP, which fell in the early session on Brexit deal problems. Gold and Oil were also up in line with the weaker dollar, the former hitting an 11-week high of $1,233 at one point. Yields were up 2bp.

Despite the Italian news, EUR was flat. There was a pullback in JPY on the risk on mood, coupled with a rise in GBP on the strong, and above inflation average earnings print (3.1% vs 2.8% est) at 08:30 resulted in a flat DXY. CAD and AUD were up slightly, as was Oil. Gold gave back some of Monday’s gains as did US 10-year yields.

Wednesday October 17
The Fed minutes often strongly lift USD and yields and today was no exception. The hawkish message was that the rate hike plan is to continue, despite noises from the White House. DXY added 0.59% and all currencies pulled back sharply against USD. JPY had been advancing earlier in the day, but joined the part after the minutes were released at 18:00. GBP had been falling all day on further Brexit woes, despite the Core CPI beat at 08:30. Yields rose 4bp to 3.21, only 6bp away from last week’s seven-year high. Oil fell sharply, down nearly 3% on the day after the EIA stock miss, and of course on the stronger dollar. Gold was flat on the day.

Equities took a breather, and SPX and NKY were flat on the day. DAX was down as the 10-year BTP yield rose again, and on a report of reduced car sales (DAX is 20% automotive), and FTSE fell in line with the Oil pullback.

Thursday October 18
We have said before many times that equities and yields react quickly and currencies react slowly. The hawkish Fed minutes late yesterday weighed today on stocks, as did Saudi Arabia as TreasSec Mnuchin pulled out of the ‘Davos in the Desert’ conference because of the Khashoggi murder. SPX gave up 1.4%, most of Tuesday’s gains, and NDX shedded 2.1%. Japan and Europe fell in line as they often do on global sentiment issues. Saudi Arabia is a big customer for many US and European quoted companies, and the worry is that the Saudi actions in Turkey may well produce restrictions on business. NDX component ISRG beat on EPS and revenue after the bell, shares rose in the AH market by 2.4%

The dollar on the other hand was still basking in the glow of the Fed minutes and added another 0.34%. But what happens when equities are down, ie risk off. The yen (and Gold) rises but all the other currencies fall, particularly CAD and AUD, and this is what happened today. Yields reacted in line with equities, and were down 2bp (half of the Wednesday gain)

Friday October 19
After well-received earnings on Tuesday, the only major report today was from PG, who beat on EPS (0.94 vs 0.90) but missed on revenue (16.50B vs 16.54B). Despite the imperfect result the stock rallied 8.8%. After the miss on US Existing Home Sales at 14:00, this led to lacklustre day with a early rally in SPX fading back to flat. DJI managed a small gain on the PG rise, although the stock is only 2.12% of the index. NKY and the European indices did better, with small gains, particularly for NKY as JPY pulled back, and for DAX on surprisingly conciliatory comments from EU Commissioner Moscovici on Italy’s budget, which led BTP yields—which had earlier in the day hit a four year high of 3.85%—pull back 33bp from there to close at 3.51%. The late sell-off may have also been linked to monthly OpEx day.

After two good days, DXY pulled back 0.32% today, largely because of the positive response by EUR to the Italian news. GBP and AUD were also up, but CAD was down after the CPI miss (1.5% vs 1.8% est) at 12:30 as was JPY as risk-off faded. Gold and Oil were up in line with the weaker dollar, the latter also being bolstered by the Saudi situation (If the US ever imposed Oil sanctions on Saudi, Oil, or at least the BNO/WTI spread would rocket in price).

DXY pulled up again this week, but only by 0.31%, and lost ground against non-DXY currencies AUD and NZD. The best forex trade was shorting GBPNZD, down 1.91%. Weak GBP made FTSE the only index winner this week, and the strongest mover, in a generally flatter equities week. Cryptos staged a small recovery, although volatility continues to fade. FANGs continued to fall in line with the general mood, although FB managed to stay flat.

Monday October 22
The first full week of earnings season opens quietly, with little news. All eyes will probably be on the reaction by the US and Europe to the Khashoggi murder now that the Saudis have admitted killing him. Areas to watch are defence stocks and the BNO/WTI spread (Saudi oil is priced in BNO). New Zealand markets are closed for Labor Day. This may have an effect on the start time for the Sunday afternoon/evening forex quotes in the US and Europe.

Tuesday October 23
A big day for earnings with VZ, CAT, MCD, MMM and UTX all reporting before the bell. Their combined weight is 18.18% of DJIA. Some pre-market DJIA/SPX futures divergence is distinctly possible. There are no economic releases (which affect the major currencies) at all today, the first time we can remember, and certainly for over a year. FOMC Kashkari (the most dovish and not a voter, so not very important) speaks at 13:30. BoE Chief Economist Haldane speaks in Paris at 10:30. There are rate decisions in troubled EM countries Argentina (hold expected) and Indonesia (25bp hike expected).

Wednesday October 24
Less stocks today but heavier weights. BA is the largest component (9.49%) of DJIA and reports before the opening bell. After the closing bell, the most important companies reporting are MSFT (10.17% of NDX) and V (3.73% of DJIA). Also reporting after the bell are once-great but now troubled giants F and T, and gold miner (and gold proxy) ABX. The most important economic release today is the Canadian rate decision where a 25bp hike is expected (97% priced in), despite weak Canadian data. September CPI missed estimates but is still above the BoC target, which like the US is 2%. There are four Fed speakers today: George (the most hawkish, 2019 voter) at 0000 in Sydney, Bostic (dovish, 2018 voter) and Mester (hawk, 2018 voter) both at 1700, and Brainard (was a dove, now only dovish, makes her more interesting, as it proves she can be swayed by evidence, 2018/2019 voter) at 2300. The Riksbank are expected to hold the SEK rate.

Thursday October 25
Probably the biggest day for NDX of the whole earnings season, as AMZN, GOOGL, and INTC report after the bell, along with 372 other stocks today, the most in one day so far this quarter. NDX stocks CELG, WYNN and AAL report before the open but they are only 1.05% of NDX combined. However, the after-bell reports total 24.23% of the tech index. If you can’t trade these stocks after hours, you can still trade NQ_F, the NDX futures instrument. For Europe-watchers, troubled DB report after the European bell. On the schedule, the most important news is the Euro rate decision and conference.

Of particular interest today is the new Fed Vice Chairman Richard Clarida, who will be speaking at 16:15 for the time in this role since his appointment in September. He is an economics professor and former director at Pimco, so we know he will have a strong feel for bonds! It remains to be seen how hawkish he is. There are rate decisions on TRY, NOK and UAH.

Friday October 26
No significant earnings today, so the important news is US GDP at 12:30. As usual the report comes with the quarterly PCE (inflation proxy) figure. There is a RUB rate decision, hold expected. Looking forward into the weekend, the presidential election in Brazil is expected to confirm right-winger Bolsonaro, and regional elections in Germany are expected to cause losses for the ruling CDU. Also, daylight savings time ends in Europe but not in North America or Australia. For two weeks, European traders will see US markets open and close an hour earlier than usual. It also means that the UK will move to exact GMT time.