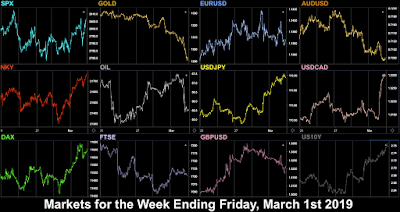 Mon Feb 25
President Trump announced today that as there had been “substantial progress” in the US/China trade talks, he would be postponing the 15% increase in tariffs on $200Bn of Chinese imports. Although Chinese markets soared over 6%, the results were only modest in the US, Japan and Europe, which registered slight gains. DAX even retreated after the cash close. DXY had a flat day (as did Gold), with modest moves up in EUR, AUD and GBP being balanced by slight softening of CAD and JPY. Yields

We have highlighted before the effect of President Trump’s tweets on his two favorite market subjects, the value of the dollar and the price of oil. Today he tweeted again that oil was too high, and  called on OPEC to “relax” Brent crude. The prices of both BNO and WTI quick dropped 3.2%.

Tuesday February 26
The big story of the day was UK PM May giving ground on Brexit, saying that if a vote for a deal could not be reached in time for the Mar 29 deadline, she would seek an extension. Sterling added over 1% on the news, which inevitably caused FTSE to fall (71% of the revenue of FTSE companies is from outside the UK). NKY moved down sharply in the cash session but recovered in futures to end the day flat, as did a volatile SPX. DAX continued to move independently and ended up.

The miss on US Housing Starts and Home Prices led to a weaker dollar, with DXY down 0.39%. Although not as strong as GBP, all currencies and Gold were up. Oil recovered 1% after the tweet crash. Yields were down in line with the weaker dollar. The Powell Humphrey-Hawkins testimony (summary: ‘patient’) did not add anything to what we already know.

Wednesday February 27
Another down day in equities as USTR Lighthizer testified to the House that a China trade deal was not yet certain, and would be a “long process”. Although not directly market-related, it didn’t help that Pakistan shot down two Indian military jets in Kashmir. Also the US Trade Balance (1330), Capital Goods, and Factory Orders (both 1500) reports were all down on the previous figure. World markets followed suit, although NKY managed to close flat in futures helped by the weaker yen.

The Brexit softening by PM May was accompanied by softening from both the hardline (want out, don’t care about a deal) ERG group in her party, and also the opposition Labour Party. Sterling continues to rise to its highest level in nearly eight months. Further oil recovery on the strong EIA beat at 1530 helped CAD, which despite a miss on annualised CPI, improved core monthly to 0.3% from -0.2% previously. Other currencies and Gold fell, resulting in a flat dollar basket. Yields were unusually up 4bp today, following USDJPY on part two of the Powell testimony.

Thursday February 28
Another down day after the failure of the Trump/Kim summit, where no progress was achieved. Also the long-awaited US Q4 GDP print at 1330, which beat estimates (YoY 2.6% vs 2.3% est, but was still well down on Q3 (3.4%). US Jobless Claims also missed. The markets are also working off an overbought condition after the strong 10-week bull run. Only DAX managed to post a small gain. The GDP print gave DXY a small boost (up 0.11%) with all currencies (even GBP) and Gold softening. Yields were up again. Oil continued its post Trump tweet recovery.

Friday March 01
Markets recovered again today, buoyed initially by the Chinese Manufacturing PMI beat at 0145, and German (0855) and Eurozone (1000) unemployment beats. The mood continued into the US Open, but was sharply halted by the double whammy of misses on the Michigan Consumer Sentiment (93.8 vs 95.7) and ISM Manufacturing PMI/Prices Paid at 1500. SPX dropped 0.73% in the two hours after the print. However, it then went on to fully recover into the close.

The GDP feelgood factor continued today with DXY up 0.22%, and all currencies and Gold down. However over half of the move was a plummet by CAD after the severe Q4 YoY GDP miss (0.4% vs 1.2%). The loonie is 9.1% of DXY, and fell 1.32% after the print, meaning if it had gone the other way, DXY would have been flat. The CAD move was accentuated by a 2.5% drop in Oil, fuelling by the ISM PMI miss.

WEEKLY PRICE MOVEMENT
A strong recovery from DAX this week, as it beat US indices and was the best performer. For the first time this year, we have a strong divergence in forex, with GBPCAD easily the biggest mover, up 2.26%. Last week’s crypto rally was short-lived, with BTC and ETH down again. A mixed week for FANGs, which were more volatile than the underlying NDX. 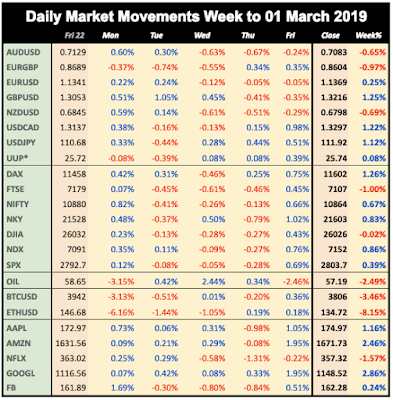 Monday March 04
A quiet start to a busy week, with limited scheduled news, so as usual, the trade war and Brexit will dominate. Brazil and Argentina are closed for two days for Carnival. India is also closed for Mahasivarathri Day.

Wednesday March 06
The Canadian rate decision is expected to be a hold, but watch out for Gov Poloz remarks. It’s Australia’s turn to report Q4 GDP, which we have seen has moved markets in other countries. The ADP ‘sneak preview’ jobs estimate is 190k, 10k more than the NFP estimate for Friday. Fed Williams (hawkish, 2019 voter) and Mester (hawk, 2019 voter) both speak at 1700. There are also rate decisions on TRY and PLN. Brazil and Argentina reopen.

Thursday March 07
Another day, another rate decision, this time the key Eurozone figure. A hold is virtually certain, but as always it’s the report and press conference 45 minutes later which will be examined. The third day of Fed speeches as well, this time Brainard (was dovish, now centrist, 2019 and 2020 voter) is on at 1715. BoE Tenreyro speaks at 0930.

Friday March 08
Simultaneous US and Canadian NFPs offer strong volatility for USDCAD today. As usual, the AHE figure may be more important than the jobs print itself. This is the final day before the US/Europe summer time disconnect. For the next three weeks, for Europeans, US markets will appear to open an hour earlier (1330 GMT), and for Americans, Europe will appear to run an hour later, closing at 1230 EDT. ECB Mersch (hawkish) speaks at 1630. Fed Chair Powell may also speak.


This report is published every week as an email by MatrixTrade.com - you can sign up to receive it here. This blog is supported solely by advertising, so if any of them interest you, please click the links. If you want notification when the blog is updated, please follow me on Twitter, Facebook, Stocktwits or Linkedin (all open in separate windows). Details of how I compile the report are here