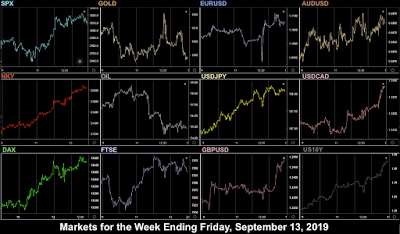 Mon Sep 09
In the absence of news, there was little action globally today, with indices more or less flat, although other markets showed a risk-on profile, with Gold, JPY and bonds firmly down, and Oil up. The exception was in the UK, where GBP rallied and of course FTSE fell, following last Friday’s success for the anti-no-deal Brexit doves, and the (accurately) predicted failure of British PM Johnson to get agreement for an election before the Brexit deadline of Oct 31. Yields were up following the Powell ’recession unlikely speech’ on Friday, a trend which continued all week.

Tuesday September 10
Another flat day in the US covering mixed action as tech fell and energy rose sharply, the latter despite a slight Oil decline. Also DJIA outperformed due to strong moves from BA and CAT. However non-US indices all rose, and Gold and JPY were slightly down in line. Other currencies were fairly flat, for once, and the real story in the US was bonds, with yields rising 11.8bp.

Wednesday September 11
A rally finally kicked in today with all markets up as investors anticipated easing in both the ECB tomorrow and the Fed next week. SPX crossed the 3,000 line, helped by a positive reception to AAPLs new cheaper iPhone and Apple TV+. Oil was up in line, helped by the EIA beat at 1530. In forex, the dollar  basket was up 0.3% with all currencies (except AUD, not part of the basket) down. Yields rose more slowly today.

Thursday September 12
Today’s bold ECB moves, cutting the deposit rate and reintroducing QE caused a huge move in EUR. It initially dipped 0.88%, but as the easing moves were less than anticipated from there added 1.47%. Notably Gold, bonds and JPY spiked up and faded more in line (to the minute) with the EUR movement, as did DAX the other way (spiked down and recovered). The US inflation beat concurrent with the ECB presser was lost in the noise. As we predicted last week, President Trump tried to tweet the dollar down by contrasting today’s ECB action with the Fed next week. Overall on the day, DXY was down 0.29%.

This was enough to fade DXY by 0.29% overall, despite JPY being slightly down, the only currency to go in that direction. Indices had received a boost the night before as President Trump postponed some Chinese tariffs as a ‘gesture of goodwill’ and were comfortably up.

Friday September 13
US indices closed flat today after an early rally, whereas DAX continued up, reflecting the ECB easing, as did NKY. FTSE was down following a very strong (1.5%) rally in GBP following a reported breakthrough in the Brexit deal talks, in that the coalition Northern Irish DUP may shift their position on the Irish backstop. A further rise in EUR meant a down day for the dollar. Gold was down and Oil flat, and yields continued upwards as they have done all week.

WEEKLY PRICE MOVEMENT
NKY came out top this week in a positive week for indices, helped of course by the 1.09% fall in the yen, which also resulted in GBPJPY being the biggest forex mover, up nearly 3%. Crypto was quiet, with ETH catching up with BTC’s gain last week. FANGs were quieter than usual, but still managed to outperform the NDX index. 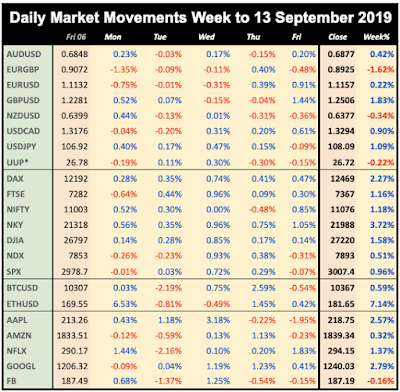 Monday September 16
The weekend attack on Saudi oilfields, possibly cutting their production in half may well affect Oil, and its proxies CAD and FTSE today. Markets are closed in Japan and Mexico.

Wednesday September 18
Today is the big day, the US rate decision. Note that the recent bond fade has pushed back the ‘priced in’ level on a 25bp cut from 90% last week to only 80%, meaning a potential stock rally to new all-time highs if the cut is delivered, unless of course Powell accompanies it with hawkish rhetoric. Also today GOOGL, FB and TWTR testify before the senate about content control. There is also a rate decision on BRL.

Thursday September 19
After the Fed have made their decision, there are six more rate decisions today, as there are also decisions on NOK, IDR and ZAR. The most important is GBP, not so much for the hold, but the committee vote (the UK version of ‘dot-plot’) and its effect on the now volatile sterling. Markets are closed in Chile today.

Friday September 20
Markets will still probably be reacting to the interest rate moves but today is monthly and quarterly Opex, sometimes called quad-witching (the daily, weekly, monthly and quarterly options all expire). It’s quite important, as index future options are mainly traded quarterly. For example SPX December 19 open interest is over double that of October and November monthlies. Note also an opportunity on CAD, their rate decision was last week, but if Wednesday’s inflation moves CAD hard, Friday’s retail sales (if one is a beat and the other a miss) may well exactly reverse it.