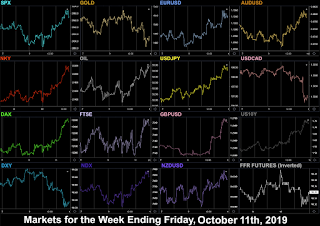 Mon Oct 07
Trade tensions continued to keep equity markets flat, or slightly down today. DAX suffered from yet another poor German Factory Orders print, although it did beat estimates.

The dollar was slightly up, but it was not even, with a flat EUR, and a slight advance on CAD. Other currencies and Gold were down. Oil and yields were slightly up.

Tuesday October 08
A US move to restrict visas for Chinese officials connected to the Muslim Uighur detentions in Western China, although not a trade move itself, was seen as a bad sign in US-China relations, and markets fell This was despite an announcement from Fed Char Powell that the Fed would recommence some QE operations. SPX was down 1.6% and other markets were similarly red. Risk assets Gold, JPY and bonds rose, and Oil fell in line with equities. DXY also ignored Powell, and was up across the board, with only NZD joining JPY in going green.

Wednesday October 09
Today’s trade war news was China’s offer to increase purchases of US agricultural goods and equity markets (and Oil) rose during the day, only to collapse over 1% suddenly after hours on a report that the US has added 28 Chinese entities to a trade blacklist. The FOMC minutes gave us nothing new, but mixed trade messages produce choppy markets, also seen in a flat DXY. All currencies (and Gold) were down except EUR, but the single currency is nearly 60% of the basket. Yields did not whipsaw, and rose gently all day.

Thursday October 10
The scheduled resumption of China trade talks, and a tweet from Trump saying he would meet Chinese VP Liu He on Friday was seen as positive, and equity markets (and Oil) were up again, and Gold, Bonds and JPY were down. Otherwise DXY was firmly down, especially after sterling rose nearly 2%, its best day for seven months, as progress appeared to be happening on the Irish border question, which is the sticking point for a Brexit deal. FTSE was therefore the only red index. US CPI printed in line with estimates and had little market effect.

Friday October 11
All positive today on both sides of the Atlantic today. The US agreed to defer some tariffs which start next week, and described it as a ‘limited deal’. Optimism was high, and SPX ended 1.1% up after being 1.9% higher earlier in the day (ie some traders took profits).

After the British and Irish Prime Ministers said there is a “pathway to a possible deal”, the UK was even better. GBP added another 1.75% and FTSE was up 1.84%. FTSE expressed in USD (ie FTSE x GBPUSD) rose 4.76% in two days, the best two-day performance since the recovery immediately after the Brexit referendum. DOil was up in line. XY was down 0.38%, following the GBP ramp (which EUR the other player in Brexit joined). Only Gold, JPY and bonds (inverse to yields) were red against the dollar, as you would expect. CAD was particularly strong on a blowout (53.7k vs 10.0k) jobs report. 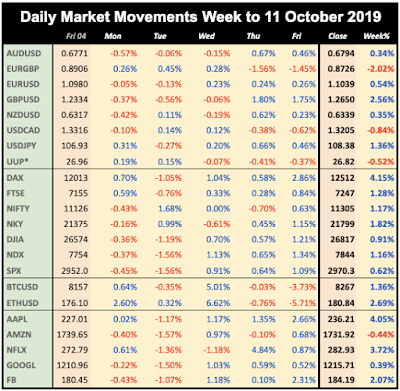 Monday October 14
US Bond markets are closed for Columbus Day (although the ZN future continues to trade). At some point this week, the US Treasury may release their ‘currency manipulation’ report. Canada is closed for Canadian Thanksgiving. There were local elections in New Zealand this weekend.

Tuesday October 15
Earnings season kicks off properly today, with a raft of reports from major players between 1040 and 1315, before the opening bell. The expected order is JNJ first, then UNH, JPM, GS, WFC and C. JNJ, UNH, JPM and GS together make up 17% of DJIA. As well as Bullard, we have Fed Bostic, George and Daly speaking today. Some US tariffs on China increase today.

Wednesday October 16
BAC report at 1045, before the bell today. After the bell we have NFLX and IBM. Fed Evans and Brainard speak today. There is a rate decision on KRW (25bp cut expected).

Thursday October 17
Today and tomorrow sees the long-awaited EU Summit which is the UK’s last chance to do a Brexit deal, or ask for another extension, which PM Johnson does not want to do. If a deal is made, he then needs to secure a parliamentary majority to confirm it, and the UK parliament has a special session this coming Saturday to confirm or reject it. Earnings today from large but low-volatility players such as HON and PM before the bell. Fed Evans (again), Bowman and Williams speak today.