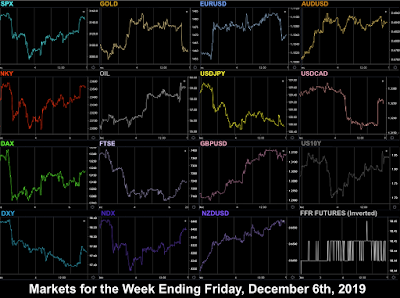 Mon Dec 2
He did it again today. President Trump reimposed tariffs on steel and aluminum from Brazil and Argentina, probably in reaction to their weakening currencies, which together with the important ISM PMI miss art 1500 sent SPX down 0.8%, its worst day in six weeks. Other indices followed suit. In liner, the dollar was down against Gold and all currencies except CAD, after Canada’s PMI also missed. Yields were surprisingly slightly up, as was Oil, although the latter was to be expected after Friday’s sharp fall.

Tuesday December 3
Markets tumbled further today on President Trump’s announcement of tariffs on France, in retaliation for their digital services ‘Google’ tax, and more worryingly that a China trade deal might not be concluded until the end of 2020. Only DAX, which had fallen more sharply on Monday, made a slight recovery. The reaction in Gold Up (1%)and Bonds (yields down 15bp) came today, both sharply up, the former by over 1%. Oil had a flat day. AUD rallied further after the RBA hold.

Wednesday December 4
Despite the South American and France actions, reports that Washington and Beijing are closer to agreeing Phase 1 tariff reduction lifted markets. Also PMI beats in China and Europe helped other markets, and all indices were up. The dollar had a third down day against other currencies, with the exception of Gold and JPY, which were down in line with the equity move. Oil was up sharply, rising 4% on the EIA stock beat, which helped CAD, also strongly up (0.75%) following a hawkish BoC report with their rate hold. Yields recovered somewhat after Tuesday’s 15bp drop.

Thursday December 5
After the wild moves in earlier days, markets were much quieter today, with the US nearly flat. A fourth day of dollar decline, and therefore EUR and GBP strength weighed on DAX and FTSE, which were both red, after German Factory Orders (0700) and Eurozone Retail Sales (1000) both missed. Gold and Oil were flat, and yields were up, but still not back at Monday’s level.

Friday December 6
The NFP blowout of 266k vs 183k, especially after the ADP miss at 67k on Wednesday, coupled with a rare beat on AHE (3.1% vs 3.0%) was welcomed by markets which shot up. There was not even any pullback between the print and the opening bell, in fact only a little profit-taking at the end.

It was the same story in other markets, and finally we had a green day in USD. Gold fell sharply reversing its Tuesday move. Yields shot up in line with the dollar and bond-stock rotation. As we signalled last week, the sharp positive move in CAD on Wednesday was almost exactly cancelled after the Canadian jobs report missed. The only oddity was JPY, which after a brief spike down on the NFP print, climbed again and ended the day up.


WEEKLY PRICE MOVEMENT
A V-shaped week produced a surprisingly muted weekly performance with only FTSE moving more than 1%. It was down 1.45% on GBP strength, the second best performing currency. The top mover was NZDUSD up 2.22%. Cryptos went back to sleep, and FANGs were a mixed bag, with AMZN’s drop and GOOGL’s rise being the biggest moves. 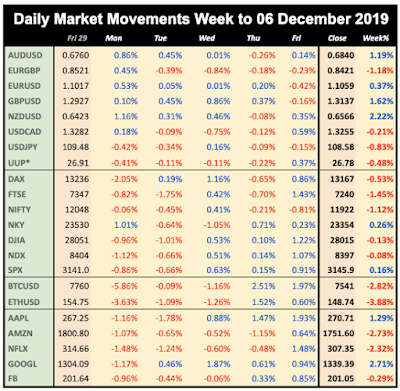 Monday December 9
Over the weekend Chinese trade balance figures are published, and of course we enter yet another week waiting for US-China trade progress, in particular to delay the next set of tariffs due on December 15th. Remember of course CNBC Jim Cramer’s comment that as long as the market stays up, there is less pressure on Trump to conclude the deal.

Tuesday December 10
The Chinese inflation print is the big news today. Also at some point this week President Trump is expected to sign a Phase 1 (excluding autos) deal with Japan. Also two members of the WTO appellate panel retire today, meaning decisions will remain in limbo until new appointments.

Wednesday December 11
A big day today, the last rate decision of the year, which is universally (99.3% probability) expected to be a rate hold. There is the important CPI print before the open, and a rate decision on BRL.

Friday December 13
A quiet day today, where markets will still be reacting to the US and European rate decision statements. There is a rate decision on RUB.