A consolidating week where SPX just about pushed through the all-time high, but without much conviction, when the gloomy Fed minutes did not offer anything new, and on Friday, the recently forgotten Brexit disputes came to the fore. Gold, yields, and DJIA all posted the first inside week for months. All this against the continuing COVID-19 crisis, where there was no good (ie vaccine) news this week, although the second wave in the US has been receding for about a month, and we are starting to see deaths receding. Joe Biden and Kamala Harris were confirmed on the Democratic ticket for the White House, although there were no surprises.

Next week it is the turn of Trump/Pence, so we can expect the campaign to begin in earnest as we enter the final week of August. The major event of the week is the Jackson-Hole conference, where we get all the world’s central bank governors in one place. We have seen recently that central bank speeches and actions seem to have more effect on the market than the usual macro data, and in any event it is another quiet week on that front. Other than that, Congress may of course finalise the next COVID support bill, but it is unlikely. Rotation is expected to continue, the charts suggest it should be industrials turn next week. Earnings season continues, but all heavyweights have now reported. 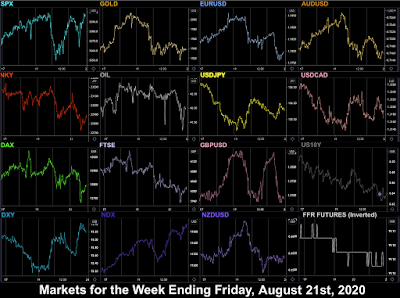 Mon Aug 17SPX wavered around, but could not quite reach the 3393 the all-time high today, and DJIA fell 1%, whereas tech outperformed, on a quiet day where the only news was more rhetoric from Trump about Chinese companies, this time BABA (not an index component, and still up on the day), although the Phase 1 China deal remains intact. The dollar continued its downward trend, falling across the board. The haven trio (Gold, Bonds, JPY) were up in line, but surprisingly Oil was up.

Tuesday August 18
More of the same today in equities. SPX finally made a new intraday and closing ATH, although only by a couple of points, and once again, DJIA was down, NDX outperformed, the dollar was down. The havens were up in line with DJIA. The dollar broke through support to post a new 2-year low intraday and closing low for DXY touching 92.12 at the low of day. The only difference was Oil giving back half of yesterday’s gains. WMT beat on earnings, but after a brief spike, ended the day slightly down, as did HD, casting a slight pall on the retail earnings phase.

Wednesday August 19
Today the Fed minutes reiterated their gloomy outlook, saying “he ongoing public health crisis would weigh heavily on economic activity, employment, and inflation in the near term and was posing considerable risks to the economic outlook over the medium term.” but failed to offer anything further in terms of fiscal support such as explicit guidance on the future path of the federal funds rate, or further monetary easing. Despite AAPL briefly entering the $2 trillion market cap club today (only two years after hitting $1 trillion), we saw a clear reversal at the time of the release.

Equities moved sharply down, and DXY moved sharply up across the board. The haven assets clearly followed the dollar, not equities. All three noticeably down on the release. European equities had closed earlier in the green, but futures were inevitably dragged down, although obviously by less as they are not denominated in dollars.

Thursday August 20
Stocks pulled back quickly today from the Fed-inspired drop, although the timing left European stocks in the red at their 1530 close. SPX and DJIA only managed modest gains and the former closed shy of the Tuesday high, but once again NDX outperformed, and within NDX, the FANG group (or FAAMNG to be more precise) outperformed the index. AAPL managed to close with a $2T valuation. Nearly all the NDX rally is being powered by this group. TSLA was up 7% and for many is considered to be now in this golden ‘tech cult’ group.

Similarly, the DXY rally was short-lived, with all currencies positive against the dollar, and the haven trio up again in line with the dollar, not stocks. Oil continued its tight consolidation, it has traded in a range of less than 2% this week, and only 3.4% since Aug 5th. Today it was 0.46% down, which is as good as flat, as it slips gently above its 200 day moving average.

Friday August 21
In the European morning, news of a lack of progress in Brexit talks led to a sharp fall in European indices, EUR and GBP.  A deal “will not be easy to achieve”, and  “time is short for both sides”, said UK chief negotiator David Frost after the seventh round of talks. This spread to US index futures, although SPX and the others had largely recovered by the cash open. European index losses (notably FTSE -0.51%) were trimmed by the currency moves.

This was a good example of a positive dollar day being driven externally. The DXY basket only rose 0.50%, less than the downward move in either EUR and GBP. Gold followed the dollar again, yields were more or less flat. Both closed an inside week, as did DJIA which ended only one point away from last Friday’s close. Oil was dipped today to close flat on the week. Commodities have the same issue as Europe, where trading closes earlier than the NY equity bell.

WEEKLY PRICE MOVEMENT
Another week of consolidation still saw NDX outperformance, up 3.5%. The fragility of the equity rally is shown by EURJPY being the top mover, down 1.13%. Bitcoin continues to sleep, whereas ETH pulled back sharply to give back last week’s gains. FANGs once again outperformed.

My call to sell GBPCAD paid off nicely after the Brexit news. The pair was down 0.67%, moving my running total to 8.58%, and a second winning week gives me 14 wins out of 29. This week, after being flat, I think NZD will fade again. I also think equities will pull back helping JPY, so my choice this week is to short NZDJPY. 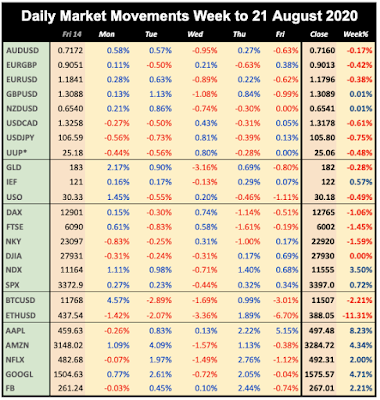 Monday August 24
Today is the first day of the Republican National Convention, which of course is also affected by the pandemic. There will be some meetings in Charlotte, NC, with socially distanced seating, and apparently no press, but it is expected that the event will be largely online. The confirmation of the Trump/Pence ticket is assured, and this marks the start of the campaign proper, so expect plenty of speeches from President Trump. There is no schedule macro news to speak of.

Tuesday August 25
The RNC continues as the only important news comes from Germany.

Wednesday August 26
Another quiet day in this vacation month, with only the Durable Goods/Capital Goods print of note.

Thursday August 27
At the end of August, we have the traditional Kansas Fed annual symposium at Jackson Hole, Wyoming. This year it will be held digitally due to the pandemic, which means we will actually get some action today, which is normally to the ‘travel to’ day, with Chair Powell to start followed by the new BoC Governor Macklem. As it happens this is also one of the busiest days in this quiet news week.