On 25 October I wrote about Ferrari's $60 IPO. You can check the post here.

In fact you must read it to get the most of this posting. Anyway, as you know I was pretty negative. So what happened to the shares? 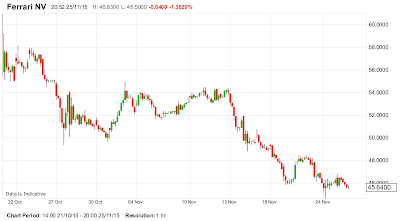 Well after starting in pole position, they entered the race badly, and have fallen behind. The price took a brief pitstop on 31 October, and then entered the race to the bottom again. They have managed to lose 25% in a month, closing tonight at $45.64. This is in a month when automotive share have soared, following a little problem in Germany, home of Ferrari's chief competitor on the track, Mercedes, owned by Daimler AG (DAI.GY). How have they done in the same period? 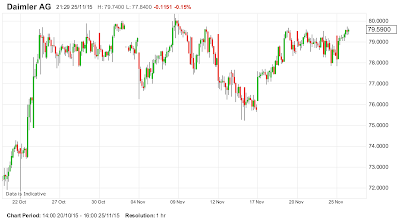 Up by nearly 10%. You can see the difference even more markedly in this chart for the last week. 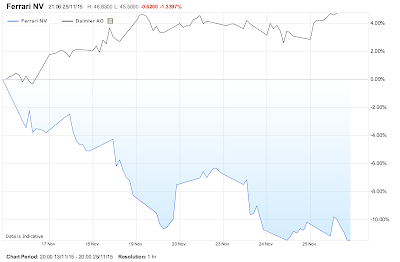 Now at the IPO, Ferrari's price was 72 and Mercedes was 60. So Ferrari were in the lead. Pole position on that ludicrous PE. Now Mercedes are at 80 and Ferrari is at 45. How much less than 45 is 80. 56% less. Why is that figure significant? Let's look at the F1 Constructor tables for the 2015 season so far from the formula1.com website.

Did you get the reference in the title of the article? If not click here