Another posting from my Essex FTA course. This one is completely counter-intuitive for a fundamental analyst, and is designed to prove the superiority of technicals in the short-term (1-2 weeks). We shall see!


I was alerted to this study initially, because I noticed that TSCO and MRW were right their support levels once again, and before leaping in with a buy, decided to do some fundamental research as well.

On 17 November, respected retail research company Kantar WorldPanel produced their regular report on supermarket market shares. It comes as no surprise to find that upstart competitors Aldi and Lidl had taken their market share of the UK sector sale to over 10%.

Fraser McKevitt, head of retail and consumer insight at Kantar Worldpanel, comments: “If you look back as recently as 2012 Aldi and Lidl only held a 5% share of the market, and it had previously taken them nine years to double their combined share from 2.5%. In the last 12 weeks the two retailers have attracted another additional million shoppers compared with last year[1]

In other words, the trend that has been observed a few years now is not only continuing but accelerating. Sadly for investors Aldi and Lidl are private companies.

The public companies in the sector are Tesco (LON:TSCO), J Sainsbury (LON:SBRY), and Wm Morrison (LON:MRW). The Asda chain is part of the US Wal-Mart behemoth (NYSE:WMT), but the UK Asda operations are not significant enough to affect the overall share price.

Looking further into the Kantar report, we find that “Sainsbury’s has seen its fourth consecutive period of growth, flying in the face of tough market conditions. It’s 1.5% increase in sales was sufficiently ahead of the market for the retailer to increase its share by 0.2 percentage points – the first share gain registered by any of the ‘big four’ retailers since October 2014.”[2], but that “..sales fell at the rest of the major retailers – at Tesco they were down by 2.5% while Morrisons saw sales fall by 1.7%.”[3]

So Sainsbury’s have not lost market share, whereas the other two FTSE-quoted players have. Let us see how this has affected their share prices. 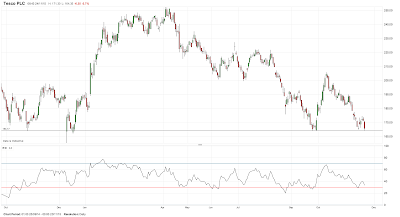 It is clear that TSCO having already fell sharply the week before, actually rose slightly on November 17, and fell again. At the time of writing the price is 164.50p, a support level which held in October, and indeed in December 2014, subject to a one-day outlying spike (to 155.40 the old 2003 low).

Immediately, I am attracted to the strength of that technical support, notwithstanding fundamental bad news. 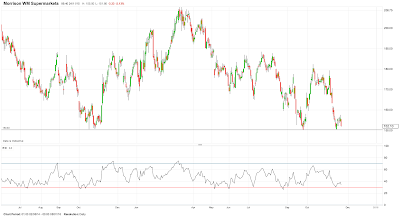 MRW shows an almost identical pattern. A low reached in December 2014, was again touched in October, and we are at this support level, the round point price of 150p, for a third time today. Once again November 17 showed a small rise. 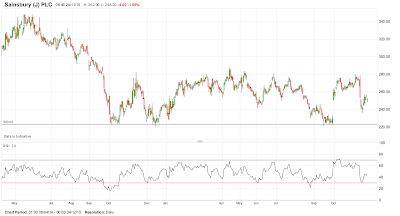 So what of SBRY, the ‘winner’ in this report. As you might expect, their share price is slightly stronger. The price rose a little more than TSCO and MRW following this report, but it is notable this share too exhibits the pattern shown by the other supermarkets. The SBRY support line is at 223p, and was touched, like TSCO and MRW in December 2014 and October 2015, with an additional touch in October 2014.

However, the price today of 248p is 25p (10%) above the support line. Also unlike the other supermarkets, the share price chart contains a large gap on September 30, following a 10% leap on an earnings report[4]. This gap has been partially but not wholly filled.

My contention is that the good news for Sainsbury’s from this report is ephemeral, and the share is in fact a week behind TSCO and MRW, and is therefore doomed to fall to the 223p support level again before advancing. On TSCO and MRW, I think the support is so strong that it will hold, and those shares will now rise. My timeframe is a week or two, and certainly no later than the end of the year, as trading statements are delivered from MRW, SBRY and TSCO on January 12, 13 and 14 respectively[5], and technical movement needs to be unimpeded by fundamental data.

It is not possible to check P/E ratios as of today, because TSCO and MRW’s last earnings report showed losses. The less used ratio of book value to market cap, and dividend yield shows

which would confirm MRW as a buy, for yield alone, but mark TSCO as a sell, and SBRY, as the only one making a profit and valued below book as a strong buy.

Nevertheless this trade is a test of the superiority of short-term technicals over fundamentals, and so I have today placed the following trade

I will review the position in about a week.