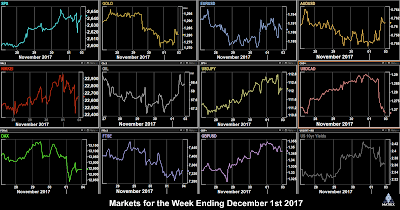 The markets entered the week after Thanksgiving quietly. As we predicted last week, AMZN made further gains on Monday, gapping up past $1,200 to close the day $10 up. However, a 0.72% fall in the Shanghai Composite index weighed, and all indices were down. However SPX, NDX, and DJIA managed to eke out slight new all-time highs. The slight risk-off mood was confirmed by advances in Gold, JPY and bond prices (inverse to yields). Otherwise USD fell in early trading, but recovered to end the day slightly up against all other currencies. Oil was down ahead of the OPEC meeting.

Once again we had Turnaround Tuesday. All indices were well up (with further US ATHs) on the tax cut momentum, and comments from new Fed Chair Jay Powell on easing of financial regulation. Gold and JPY were down as were bond prices initially, although they ended up flat. After an initial dip, GBP was up on the day after it was confirmed that the UK intended to fully honour the Brexit ‘divorce bill’ removing the largest obstacle to a post-Brexit trade deal. However, it was on its own, all other currencies fell against the USD and DXY was 0.4% on the day. Oil was down slightly again, down 0.2% to $57.99 anticipating the API Stock miss at 2130 after the pit closed.

On Wednesday SPX and DJIA were up again, touching new intraday highs after the US GDP beat at 1330. However, other equity indices fell, NDX giving up 1.20% on the day, as tech stocks rotated into financials. DAX and FTSE posted losses, the former despite the inflation beat at 1300, and NKY was roughly flat. The ongoing progress in Brexit pushed GBP above $1.34 to a new two-month high. USD rose against all other currencies except EUR, which rose slightly, with a net result of a flat DXY. This was reflected in higher bond yields, up 6bp at 2.39% and lower Gold prices.

The market still had no news on the OPEC cuts, and after an early rally, Oil dropped sharply by $1 (1.71%) on the EIA stock miss, although unusually, the sell off was into the miss. The price recovered 45 minutes later, to sell off again into the close.

Thursday was a blowout for US indices after Trump critic and former presidential candidate John McCain confirmed he would support the tax bill, with DJIA putting on 1.28% and together with SPX making another ATH. NKY also ramped as JPY continued to slide along with Gold and bond prices (inverse to yields), very much risk-on. The mood was not shared in Europe, DAX and FTSE both fell after early rallies following the German Unemployment beat at 0900. The forex trend for the week continued with GBP (and EUR) outperforming the dollar, but other currencies giving up ground. Oil performed an almost exact repeat of Wednesday’s price action, as OPEC and Russia agreed to extend cuts until the end of 2018.

Friday was the most volatile day of the week, and indeed for many months. SPX had given up 1% in the Asian session, and was slowly climbing again on anticipation of the tax cut, when a bombshell dropped. Trump’s former national security advisor Michael Flynn had already pleaded guilty to lying to the FBI, but an ABC report at 1600 (1100 EST) said that Trump instructed him to contact Russian officials before the election which would have been illegal. SPX immediately dropped 45 handles (1.7%). However, it turned out that the story was “fake news”, and the instruction was actually issued after Trump became President-elect, a perfectly normal action. The market quickly recovered and finished the day slightly up, although it couldn’t quite make another high. The picture elsewhere was mixed. USDJPY fell on the Flynn news and did not recover, and NKY, already down, fell with it. DAX had already collapsed in the morning, and did not recover. Only FTSE managed modest gains, as GBP turned down slightly after a week of gains.

We promised volatility in CAD last week, and we got it. In a standout move, the loonie recovered all the week’s losses, after the best jobs report for over four years. The print of 79.5k (equivalent to 715k in US NFP terms) blew away the 10k estimate, and CAD put on 193 pips (1.5%) on the day. This was of course helped by the weakened dollar and a sharp (2.5%) rise in Oil as traders digested the OPEC news.

All the currency patterns for the week were reversed, EUR and GBP were down, whereas AUD and Gold were sharply up in line with JPY. Bond yields were also down.

These are the prices movements for the week on the instruments we cover, with a mixed USD pattern. The best forex trade would have been to buy GBPJPY, up 1.76%. For once, NIFTY was the most volatile index and overall biggest mover, down 2.58% on poor fiscal deficit news.

Another busy week ahead with two rate decisions and NFP, not to mention the ongoing tax bill and Flynn situations.

Early on Saturday morning, the Senate passed the tax bill as expected, and Greece (remember them) reached a preliminary deal on further reforms needed to leave the bailout plan next August.

Monday is deadline day for the UK Government to come up with an improved ‘divorce’ offer. ECB member Costa speaks in Portugal, but news is light, and we expect the tax bill and the Flynn case to continue to dominate.

Tuesday has a raft of PMIs, but the main area of focus is Australia, where retail sales is reported shortly before the interest rate decision. AUD is still very weak and traders will be listening for policy guidance, although little is expected. There is also a rate decision in Poland.

Wednesday gets busier. The House and Senate start to reconcile their versions of the tax bill. ADP, the ‘sneak preview’ of NFP is published, with an estimate 15% higher than the NFP estimate. The biggest news of the day is the Canadian rate decision. It will be interesting to see if this pushes USDCAD up, having reached channel support last Friday, or whether hawkish remarks push CAD higher.

On Thursday, Germany’s ruling SPD party starts a three-day convention in Berlin, the pressing issue being the still unresolved coalition. There are some signs of hope which would be positive for EUR and DAX. The main news release is Eurozone GDP, although the effect of this is muted as it comes after the individual countries report.

Friday is the US government shutdown deadline, although there are already plans to avert this with a stop-gap bill. The big news, as always is NFP, with particular focus on wage growth (AHE) if the figure is broadly in line with estimates. Please recheck the estimate on the day, as it has been known to move as the week progresses.