Monday saw the effect of the tax bill being passed in the Senate. Indices gapped up and SPX made yet another new intraday all-time high of 2665, but a sharp 100-point sell-off in NDX dragged SPX down to finish 0.1% on the day. NKY followed suit, but the European picture was mixed. After some volatility, DAX edged a small gain, but although FTSE was flat by the cash close, overall it was down on a strong British pound, which rose sharply on positive Brexit news, although some of these gains faded later. Otherwise USD was slightly down against JPY and CAD. Gold, EUR, AUD and 10-year yields were flat, and Oil was down slightly.

Weakness in equities continued on Tuesday, fuelled by misses on US Trade Balance (1330) and PMIs (1445/1500), and concern that the Senate had failed to repeal corporate ‘alternative minimum tax’, a provision which limited the tax advantages for some companies. DAX and FTSE also fell, although NKY managed to stay flat. In forex, AUD put on 50 pips (0.67%) on the Retail Sales beat at 0030, and the Chinese Caixin Services beat at 0145. There was however little reaction to the rate hold. These gains were given up in the European session to end flat on the day. Otherwise USD was slightly up across the board (as were yields), with GBP faded particularly sharply. It then recovered in an almost perfect reversal of Monday’s price/action. Gold fell $9 to £1,266, and touched a two month intraday low of $1,261. Oil was generally flat after a choppy day, on concerns that the rising price will re-open significant US shale capacity.

Early Wednesday was the low point of a V-shaped week for all equity indices. NKY started the ball rolling in the Asian session by giving up 300 points (1.33%), its biggest one-day drop for eight months, the HSI fell 2.1%, and when the DAX future opened at 0700, it immediately gave up 150 (1.15%) points before the cash index and component shares opened. FTSE and SPX had sold off the previous day and so were not affected. Having touched these lows, all indices then recovered throughout the European and US sessions, helped by the ADP jobs beat at 1215, and closed positively, but not by much.

USD had a similar low point, and recovered today. The dollar was up against all currencies, and Gold was down again to a new low. Surprisingly bond yields did not respond and ended 3bp down. As we predicted last week, the Canadian rate decision (1.0% hold) caused a 153 pip (1.21%) spike up for USDCAD, reversing most of last week’s payrolls movement, but no doubt assisted by the sharp drop in the price of Oil. AUD was very volatile after the GDP miss, and ranged 0.86% with a minute, a rare stop-hunting exercise we rarely see these days. It ended up 0.6% on the day.

However, the story of the day was Bitcoin, which put an amazing 21.18% on to reach a new record high of $14,099. The move was so extreme that there were huge differences between the various exchanges. We are quoting Coinbase (gdax.com) which was the most extreme. The price was $5,870 three weeks ago. But it didn’t end there.

Thursday was a quiet day for news. HoweEquities continued upwards, and as tech stocks belatedly joined the party, we finally got the risk-off triple signal: Gold, JPY and bonds (inverse to yields) were all down (This was despite further falls in China). The only index to fall was FTSE, as GBP rallied sharply in the US session, putting on 165 pips (1.24%) between 1200 and 1830, on news that the UK had settled the Northern Ireland border issue.

Other than against GBP, the dollar was stronger against all the other currencies. It was another risk-on day with Gold and bond prices falling with JPY. GBP and JPY completed their V-pattern returning to their Monday levels, and Oil moved in that direction as well.

And if you thought the previous day’s Bitcoin was a spike, today was without precedent. The Coinbase exchange reached an intraday high of $19,694, that’s 39.6% on the previous close. It then pulled back 23% in 15 minutes, the largest and fastest pullback in the crypto-currency’s history, to finish ‘only’up 22.63% on the day. In the three and a half hours before the spike, BTCUSD rose more than SPX has risen during the entire Trump presidency.

We have often said that one sign of a top is when everyone is talking about something, ie it moves out of Wall Street into Main Street. Thursday’s Bitcoin surge was the lead story in the London Times on Friday morning.

We told you last week that Friday was the government shutdown deadline. As he did earlier in the year, President Trump signed another stop-gap bill, to kick the problem down the road, but this time only for two weeks (until December 22nd). NFP did not disappoint, beating the revised (something we also mentioned last week) estimate of 200k by 28k. Unfortunately, the sticking point in the economic recovery, as we have mentioned before, is Average Hourly Earnings which missed (print 2.5% vs est 2.7%). You can see from this chart how this month’s print was particularly poor.

Markets initially sold off the NFP although SPX recovered later in the day to post another gain, and finish the V-pattern for the week, and a closing all-time high of 2650.6. Other indices followed suit, although not at the same time. NKY and DAX made all their gains in the early part of their respective cash sessions, whereas FTSE rose throughout all three sessions, largely following the 1c-plus profit-taking fade in Cable, despite beats on the UK Manufacturing (0930) and NIESR GDP Estimate (1300) prints. Overall both GBP and FTSE posted an inside week (as did NZDUSD in the instruments we cover)

In currencies, JPY continued downward, but otherwise USD was flat against other currencies. Gold and bond yields were also flat. Oil decided to join the V-shapes by recovering all Wednesdays losses, putting on $1.25 (2.21%) at one point. Bitcoin was quiet too, it ‘only’ dropped 5.37% by midnight.

These are the prices movements for the week on the instruments we cover, with a recovery across the board for USD. The best forex trade would have been to buy USDCAD, up 1.29%. For the second week, NIFTY was the most volatile index but for the first time in ages, the worst performer was Gold which had its worst week since the beginning of May, making a four-month low.

As we enter the penultimate week before the holiday closure, it will be interesting to see if the packed schedule produces the  volatility you would expect, given potentially declining volume. Over the weekend we had China PPI and inflation figures, which missed (YoY CPI 1.7% vs 1.8% est). In New Zealand, Finance Minister Robertson speaks at 1900GMT Sunday, followed by Retail Sales at 2145, when forex markets are open.

Monday is quiet, although the US10Y auction may jolt the current yield price out of the torpor it has shown in the last two months. The next round of NAFTA talks start, and will last all week. One interesting event is the opening of XBT Futures (at 2300), the new CME instrument to trade Bitcoin without going to the trouble of wallets etc. For the first time institutional and professional investors, including HFTs of course will be active in the short-term market. Volume is likely to be enormous. If you thought Bitcoin was volatile already, wait for this.

Tuesday is important for AUD with the Australian Outlook Report. Also Governor Lowe is speaking at 2215. UK inflation is expected to rise to 3.1%, although it is so close to the rate set on Thursday, that it is unlikely to affect it. The Alabama Senate seat election (to replace AG Jeff Sessions) will report the result after the markets have closed. With Trump’s thin majority, failure of the controversial candidate Roy Moore to hold the state for the Republicans can only be seen as negative for the markets. Current polling has Moore ahead by seven points, but we all know how accurate pollsters have been in the last couple of years. Moore leans to the right of the party, so he will be a safe voter for the Trump agenda. 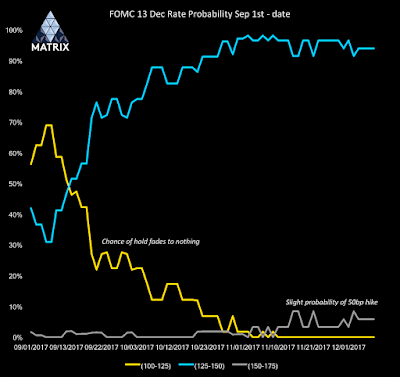 Wednesday is the long awaited December rate decision. A hike to 1.5% is widely expected, although the CME FedWatch tool actually has a non-trivial 9.8% chance of a 50bp (to 1.75%) raise. Traders will look for hints to further rate rises, and if they are not found, this suggests that the 25bp increase may actually depress USD. As well as the Alabama result, there is also the important inflation print at 1330, although clearly this is far too late to affect the Fed news. The German inflation and UK unemployment figures make EURGBP worth watching in the European morning session.

Thursday is even busier than Wednesday, and it all happens very quickly. Following Eurozone PMIs and UK Retail Sales, we have a 90 minutes period with both GBP and EUR rate decisions/statements, and the important US Retail Sales. Expect considerably volatility in both currencies against each other and USD. If that were not enough, the two-day EU Council meeting begins, and it is vital for UK PM May that the EU27 confirm that “sufficient progress” has been made, although this may not come until the following day.

In relatively minor news, there are also rate decisions on CHF, NOK, TRY, and MXN  (and for that matter South American currencies COP, CLP, and PEN), the NZ Outlook Report at 0000, and the Australian ‘NFP’, BoC Governor Poloz speech at 1740 (published at 1725). All this as USD follows post-Fed volatility, and NAFTA, the tax bill reconciliation, Russiagate and Brexit roll on. Is that enough for you?

Friday doesn’t have much in the way of releases, but the Eurozone and NAFTA conferences end, and some traders will be finishing for the holiday and therefore rebalancing their positions. BoE newly-converted hawk Haldane speaks at 1315. Russia makes a rate decision, a 25bp cut is expected.