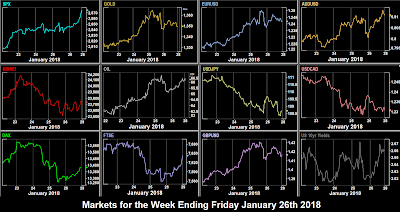 On Monday the US Government shutdown was averted, and indices continued their upward trajectory, the SPX setting another all-time high. NKY and DAX followed suit enthusiastically, FTSE less so, hampered by sterling’s surprising strength in the continuing absence of bad Brexit news. Conversely, USD continued it’s downward path, with DXY shedding 0.2%., as EUR gained on progress in the German coalition. The greenback was down against all currencies except JPY, and Gold was down in line. Oil was up slightly, as was the US 10-year bond yield, which added 2bp after touching 2.672%, the highest rate in three and a half years. After the close, NFLX beat estimates and the stock went up over 10%.

Tuesday was relatively flat for indices, although that didn’t stop SPX advancing slightly (0.9%) to post another ATH. NDX was up a healthier 0.51% (to a new high) on the back of the NFLX results. Despite the raft of Germany and Eurozone Sentiment beats, DAX remained flat, as did FTSE and NKY, although the latter made a new intraday high in the Asian session. DXY manage to shed nearly 1%; virtually all other currencies (and Gold) were up, the only laggard being AUD which failed to recover fully from an dip in the Asian session. The BoJ rate decision at 0400 brought brief volatility on both directions, and then JPY continued to appreciate all day. Bond yields followed downward, and Oil was up in line.

Wednesday was a down day in the Asian session with NKY, and this continued in Europe after PMI misses for Germany (0855) and Eurozone (0900) with DAX and FTSE falling sharply. However, despite the risk-off signs of Gold and JPY both up, nothing can stop the US juggernaut, and SPX stayed flat but DJIA eked out another all-time high. TreasSec Mnuchin’s comments about being unconcerned about a weaker dollar continued to drive DXY down another 1%, and all other currencies appreciated substantially, as did Oil. Sterling was particularly strong, up 1.5% above $1.42 for the first time since the Brexit vote. Bonds yields were up 3bp, reversing the previous day’s losses.

The minor story on Thursday was another all-time high on SPX and DJIA, but for a third day, minor movement. The pressure on other indices this week is balancing the US (irrational?) exuberance. DAX, NKY and FTSE all fell. This US pricing is all momentum now, the indices barely react to news. The huge surprise of the day was, who else, President Trump at Davos who said at 1900 “the dollar is going to get stronger and stronger and ultimately I want to see a strong dollar”, effectively contradicting his TreasSec's remarks a day before. DXY immediately put on 1% and all currencies (and Gold and Oil) fell against USD for the day. Interestingly, bond yields had preceded the statement, peaking at 2.677% around 1500. After the yields receded, and ended down on the day, not reacting to the Trump remarks. 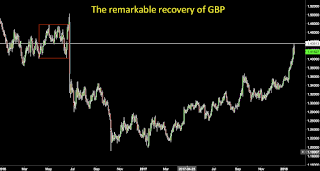 Prior to this, EUR had hit another three-year high of 1.2538 following the hawkish ECB press conference, where President Draghi ascribed the strength of the euro to external factors (ie the collapse of USD), and by implication, was not concerned, unlike last year when the single currency retreated from 1.20 after ECB concerns about the level. Also GBP touched a new intraday high of 1.4350. Cable is now back in the territory it occupied in H1/2016, when the UK polls predicted a Remain victory, or indeed the price the week before the Brexit vote. The Canadian Retail Sales print was a miss, but hardly any effect was seen.

Friday saw something we have seen every week this year (ie three times before) a strong closing rally in SPX and DJIA, and this week all the other indices followed suit. All three US indices ignored the normally significant GDP miss, and posted all-time highs again, with NDX breaching the psychological 7,000 roundpoint for the first time. The rally was repeated elsewhere with NKY, DAX and FTSE also up, the latter being particularly strong, posting its best day of 2018, up nearly 1%.

The Trump dollar effect was very short-lived, and USD continued to fall, erasing the 1% gain from the previous day. Canada missed on monthly CPI at 1330 causing a brief dip of 0.49%, which was quickly recovered, and all currencies ended up on the day, the standout being AUD (despite Australia being closed) which posted a 1% gain, and touched 0.8135, a level not seen since May 2015. Gold was slightly up, in line, as was Oil, and yields were sharply up (4bp) touching a fresh 9-year high of 2.13%.

These are the prices movements for the week on the instruments we cover, with USD pulling back for a seventh week, against all currencies, more sharply than in previous weeks. the best forex trade would have been to buy cable, up 2.27%. The top index and overall performer was DAX.

A busy week, with both scheduled and unscheduled news. The Trump Mueller investigation is back in the news, and traders are still pondering Trump’s “stronger dollar” remarks. Speculation about the Fed vice chair position may also feature. And of course it’s US rate decision and NFP in the same week.

A press conference is expected on Monday after NAFTA negotiations conclude. CommSec Ross said last week at Davos that he expected “a good chance” of success. China’s National People’s Congress Standing Committee discuss changes to the constitution. The main news of the day is US Personal Consumption Expenditure, an inflation proxy.

The main news on Tuesday comes from Europe with German inflation and Eurozone GDP, and BoE Governor Carney speaking to the UK Parliament. President Trump’s State of the Union address is at 2100 after markets close. NZ Finance Minister Robertson speaks at 2130.

Wednesday sees Australian and Eurozone inflation prints, but the big news is the FOMC rate decision. The CME Fedwatch consensus is 96.4% for a hold, so no real surprises are expected, but inevitably there will be dollar volatility following the release of the FOMC minutes, and the dot-plot forecast. We will be publishing our fractals as usual. Don’t forget also the ADP Payrolls figure, an indicator to NFP. The estimate (at 180k) is in line with the NFP estimate, so a strong variance may well move the dollar. It ought to move SPX as well, but as you know, the index seems immune to news these days. We also have Canada GDP 15 minutes after ADP, another potential flashpoint for USDCAD. Also speaking today is BoJ Iwata (dove) at 0130. Look for end of month rebalancing signs as the day goes on. We expect high volatility in NQ (NDX futures) after the US bell as FB, and MSFT report (they total 14.66% of NDX by weight). Also reporting is  BA, the largest (at 8.88%) component of DJIA. Every 1% move in Boeing causes a 23.6 point move in the Dow.

Thursday starts the new month. The calendar for the day is all PMIs, but the only important one is the ISM print at 1500. It separates out prices paid, which is, to an extent, a forward indicator for inflation. Action on the day is more likely to be driven by how traders read the Fed report, and then as the US session progresses, all eyes will again be on NDX and NQ_F in anticipation of heavyweights AAPL, GOOG, AMZN all reporting after the bell. Between them these three make up 28.87% of NDX, so volatility is assured. BABA also reports. Surprisingly, this stock is not in NDX.

Friday of course is NFP day. As usual, if the print is close to the estimate, traders will be looking at unemployment and average hourly earnings, which may include the ‘Trump tax Christmas bonuses’ although arguably some of that money may not flow through until February. In recent months, markets have paid less attention to NFP, but who knows, the effect must surely return at some time. Note that Canada’s NFP is non-synchronous this month (ie it is released a week later), depriving us of the volatile USDCAD play. To end the week, SF Fed President Williams speaks at 2030.