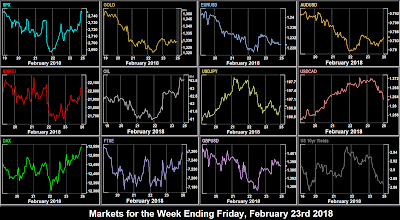 Chinese, Canadian and US markets were closed on Monday. After the rally in the previous week, equities turned down on Monday, with all indices (including SPX futures) ending lower. Only NKY managed to hold onto a small gain, after the yen retreated. After turning up the previous Friday, USD had another good day and was up slightly against all currencies and gold. Yields were roughly flat after a dip. Oil was slightly up on the day, but all in all, there was not a lot of volatility due to the President’s Day holiday.

We mentioned DJIA heavyweight WMT last week. It missed on earnings on Tuesday and fell 10.2%, nearly filling the gap up from the last earnings report, causing noticeable SPX/DJIA divergence. FTSE and NKY were also down on the day, but DAX managed to post a small (0.31%) gain helped by a weaker euro, and the German Producer Price Index beat at 0700 (although the ZEW Sentiment Survey at 1000 missed). USD rallied again, with DXY beating Monday and putting on 0.55%, up against all currencies, gold and oil. All this was against a background of the auction of $96bn of new three and six month T-bills at the highest rates for nine years, and $28bn of 2-year notes. The 10-year note yield was up 1bp. 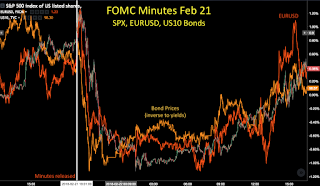 Wednesday was FOMC day. After rallying earlier in the day, indices fell sharply after the release of the final FOMC minutes under Janet Yellen, where ‘elevated’ stock valuations were mentioned. The meeting was of course held prior to the early February correction, but this was enough to cause a 532-point (2.11%) pullback in DJIA, the largest volatility seen all week. Other indices faded by similar amounts. All had been rising all day, but ended the day down. (An unusual small rally was seen in the first few minutes after the release.). The minutes also caused a rally in USD, which had already being doing well, and DXY ended up 0.49%. The dollar was up against all major currencies and gold on the day, and bond yields soared to a new intraday four-year high of 2.957%. Oil was flat on the day. One currency that beat USD today was ZAR, putting on 0.57% after new President Ramaphosa’s budget speech, as we indicated last week.

Chinese markets re-opened on Thursday. The mood was distinctly positive, and all indices moved to recover the FOMC losses intraday. However, they then moved distinctly back giving up about half of the recovery, but nevertheless finished the day up. An unconvincing rally.  Fed Bullard said that central bankers should not raise rates too fast ot avoid slowing the economy. Although he is a noted dove, his remarks, together with the natural reversal we also saw on equities, caused USD to give up Wednesday’s gains and end the day down against most currencies (not ZAR) and gold was up in line. The smallest gain was from CAD, only up 0.05% after the Retail Sales Miss (and US Jobless Claims beat) at 1330 caused at 0.59% spike down. Of particular note was oil, which, for the first time in a while, reacted logically to the EIA stock beat (-1.62M vs +1.79M), and put on an instant 1.46% rising to 1.87% by the pit close time of 1930. EIA was of course a day late because of the public holiday.

Stocks continued to rally on Friday, with all indices making new highs for the week, and posting the highest closes for the week, but notably only to finish roughly where they started, as you ca see the weekly movements below, which mask the intra-week volatility. Whereas every other day this week (and largely for the past year!) USD moved inversely to equities, today the picture was very mixed. Ignoring ZAR (which put on another 1%), we saw EUR resume its fade after the Eurozone Core CPI MoM miss, JPY, AUD and Gold were roughly flat, and GBP and CAD were up, the latter putting on 0.59% after the impressive CPI beat (1.7% vs 1.4%), a move we pointed out last week. All this resulted in a nearly flat DXY (up 0.12% on the day). Oil extended Thursdays EIA beat gains, and yields were well off, down 5bp on the day to 2.24%

USD recovered part, although not all of last week’s losses, and consequently AUD, EUR, GBP, NZD and Gold posted inside weeks. The best forex trade was to short NZDUSD for 1.33%. Volatility in indices was also down on last week, the best was NKY up a mere 1.45%. This left Oil to take the top spot, putting on 3.35%

The theme of the week in equities was a tail-off in volatility.

Last week’s equity reversals partly recovered so we had an inside week on all indices except NKY. DXY had another bad week, giving up all the previous week’s gains and then some. All currencies were up against the dollar, so selling USDJPY would have been the best trade, down 2.30%. The best index recovery, and overall best trade was SPX at 4.19% up.
Cryptocurrencies also lost volatility. Bitcoin was at $10,143 at midnight Friday, a mere 4.3% down on the week. Ethereum was $862 at the same time, a more volatile 10.4% down.

Over the weekend, the South African ruling ANC hold a meeting, which may result in a cabinet reshuffle (ie to remove Zuma cronies).

On Monday ECB President Draghi gives the introductory statement at the ECON hearing in Brussels. Board member Cœuré also speaks at 1000. One to watch is Luis de Guindos, currently a minister in the Spanish government, but nominated as the next ECB vice president. He is scheduled to speak at 1615, and we don’t yet know if he is a hawk or a dove. In the US we have St Louis Fed President Bullard (non-voter, dove) at 1300 and Fed Governor Quarles (voter, neutral) at 2015. To complete the CB picture, BoE Cunliffe (dove) speaks at 1800. The only news of import today are the NZ trade figures, released early Tuesday local time, 2145 GMT.

Tuesday’s speakers are ECB Mersch (hawkish) at 0840, followed by BuBa President Weidmann (hawkish) at 1000. The big event is the first day of the semi-annual Humphrey-Hawkins testimony, the first by new Fed Chair Powell. Today is prepared remarks, published 90 minutes ahead of the appearance. Also of interest today is a conversation hosted by the Brookings Institute between former Fed chairs Yellen and Bernanke. There are also plenty of news releases. After the important German CPI, we have the US Trade Balance and Durable Goods orders prints. All these could produce volatility.

Wednesday has the more important part of the Humphrey-Hawkins testimony, the Senate’s Q&A to Powell, as nobody knows what is going to be said. Expect a volatile US session. In Europe we have ECB Board Member Angeloni in Singapore at 0300. Another important data day with German unemployment, Eurozone CPI and US GDP and PCE (QoQ), the latter being a CPI proxy. Swedish GDP and Retail Sales are out at 0830. SEK is 4.2% of DXY.

Thursday has BoJ member Karaoke (dove) speaking in Okayama. We always watch extreme doves for the slightest sign of hawkishness. The MoM and YoY US PCE data is released at 1330, but this will have been overshadowed by the QoQ data the previous day. Of more interest is the US ISM Manufacturing PMI and Price paid at 1500, considered more important than the Markit figure released 15 minutes earlier. The Markit PMI for Canada, the first significant piece of Canadian data this week is 15 minutes before that. Markets are closed in South Korea, Thailand and Israel because of holidays.

Friday is the last trading day before the Italian Elections on Sunday Mar 4, and is also the deadline for the SPD membership postal ballot to ratify the coalition deal with Merkel’s CDU/CSU. ECB Mersch speaks at 0810. Expect some EUR volatility as traders position themselves for the weekend risk. The main news event of the day is Canadian GDP. January came in as expected, but the December miss (0.0% vs 0.2%) produced a 0.68% spike which reversed itself during the US session. The only US news is the University of Michigan sentiment index.