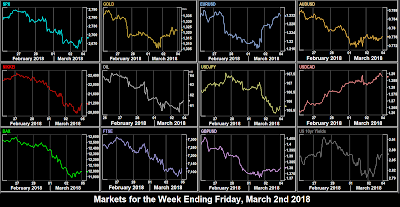 The upbeat mood in equities that finished last week continued on Monday, and all major indices were up with SPX up 1.2% on they day, and nearly 10% from the low on February 9 and only 3.3% away from the previous all-time high. DXY was flat on the day, with a slight gain (0.1%) by EUR as ECB President Draghi’s remarks at 1400 reversed an earlier slide matched by slight dollar gains against the other major currencies (including ZAR, which appears to have topped for now). Gold did not follow USD, and was up a shade. Oil was similarly slightly (0.7$%) up, and US 10-year bond yields also had a quiet day, down 1bp. All in all, consistent direction but only small moves.

Tuesday was new Fed Chair Powell’s first major outing, at the semi-annual Humphrey-Hawkins testimony, and some observers will say he is jinxed. You will remember that the market endured its biggest pullback in over two years on the day he took up office, and now on his first public outing, markets turned down again to start a week of decline, not helped by the German CPI miss at 1300, Trade Balance and Durable Goods misses at 1330, and the forward-looking House Price Index miss at 1400. All equity markets saw a Turnaround Tuesday and gave up Monday’s gains and then some. Powell largely stuck to agenda of his predecessor, but the market viewed it as slightly hawkish and bond prices (inverse to yields) and Gold were sharply down (to a two-week low) after his remarks. This consistency of Gold moving with rather than against indices shows that the interest rate roadmap (and therefore US dollar value) is the key driver to the price, rather than its traditional safe haven function. USD was of course up, with DXY posting a 0.62% gain, and advanced against all currencies. Oil was done in line with US strength, even before the API Miss at 2130.

The pattern from the previous day largely continued on Wednesday as Powell gave further testimony to the Senate.  Indices carried on fading, after misses on China PMIs (0100) Eurozone CPI (1000) and US GDP Price Index (1330)  and the dollar rose again. The German unemployment beat at 0855 was ignored. Today of course there was also the effect of month-end rebalancing. SPX was actually up two hours before the US closing bell, and then faded 42 handles (1.53%) into the close. DJIA lost 411 points in the same period.  Other indices followed suit after early gains. The decline was exacerbated by a sell-off in energy stocks, following Oil’s 1.3% pullback after the EIA Stock miss at 1530. As we have said previously, Oil has started to react again to this important news print, and we also saw a spike down in CAD. It is good to see islands of classic intermarket activity in this sea of sentiment. 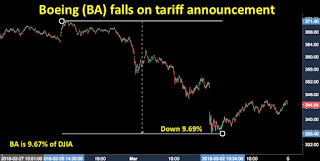 The new month opened on Thursday with President Trump’s announcement a tariff on imported steel (25%) and aluminum (10%). Producer stocks in those industries soared. However these stocks are absent from DJIA and have low weights in SPX, but stocks of consumers in these metals are heavily represented. Boeing (BA) is 9.67% of the DJIA and fell sharply, a total of 9.69% by the low of the following day. The result was a decline in stocks across the board, with SPX and DJIA falling over 1%, the first time in two years that this has happened on three consecutive days. The ISM PMI beat at 1500 caused a brief but not insignificant (1%) rally in SPX, but this faded quickly as the tariff news spread. DAX, also troubled by four problems; the German coalition vote, the Italian election, a sharp rise in EUR, and the effect of tariff on its auto sector (14.55% by weight) fell by 2%, and FTSE and NKY followed the trend.

The dollar rally ran out of steam on the protectionist news, and the day saw the greenback down against all currencies, even CAD, the largest supplier of US imported steel and aluminum. After initially touching a six-week high, DXY shed 0.47%, and Gold was up in line. Yields fell sharply on the news, dipping briefly below 2.8% for the first time in nearly a month. Oil continued to fall on the EIA (and earlier API) stock miss. 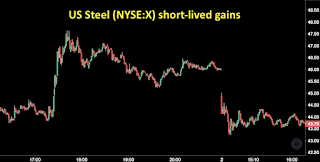 The equity indices stabilised on Friday. After a further dip during the Asian and European sessions, SPX defensive and technology stocks led a recovery in the US session. This resulted in a 1.1% gain for the day in NDX, 0.5% on SPX, but a 0.3% loss on DJIA. Similarly FTSE and NKY eked out tiny gains, but DAX, weighed with additional problems (and a further rally in EUR) closed down 2.3%, after touching a six-month (and within 9 points of an 11-month) intraday low. Oil followed a similar pattern, declining earlier to rally into the US close, finishing 0.7% up. US Steel (X) gave up the previous day’s gains and gapped down at the open.

For once, the currency position was mixed, was traders absorbed the excitement of the week and the prospects for the weekend. EUR rallied again, to complete a V-shaped pattern and close flat for the week. JPY also rallied on BoJ suggestions that it could tighten monetary policy as early as next year. GBP continued to recover from the sharp drop on Wednesday. However Canada’s miss on GDP at 1330 and tariff fears kept the loonie in the red. AUD was also slightly down despite Gold adding a nugatory 0.4%. Yields were back up 6bp, erasing Thursday’s losses but finished roughly flat on the week.

A mixed USD picture this week, with JPY sharply up, and CAD sharply down on the steel and aluminium tariffs. The forex trade of the week would certainly have been to sell CADJPY to make 3.11%. (The last time a pair moved 3% in week was Oct 20th last year). Volatility returned to indices after last week’s calm, with DJIA posting a lot of 100-150 point hourly candles. All indices fell all week, but the biggest mover, and best overall trade was DAX which gave up 4.34% on Italian election uncertainty. Gold has ignored most of this recent volatility and finished almost flat.

Bitcoin had a good week, up 7.98% whereas Ethereum was much quieter, finishing almost flat. Since our cut-off, both currencies have rallied into the weekend.

Next week will initially be dominated by Sunday events in Europe, the Italian election (first exit polls at 2200), and the formation of a continuity coalition in Germany following the SPD vote. With four major rate decisions and NFP, next week should see the volatility unabated.

Monday sees the US International Trade Commission issue a decision on anti-dumping duty (tariff) on welded pipe imports. This affects Canada, China and India. Fed Quarles (voter, dovish) speaks at 18:15, but only on foreign bank regulation. The economic prints are all PMIs. All are well into growth (above 50), so only a large variation from estimate is likely to move markets. Australia is closed for Labor Day.

Tuesday sees the first of four rate decisions this week, conveniently spaced at one per day. The RBA are expected to keep rates on hold. AUD is under pressure at the moment, but any move may come on Gov Lowe’s speech which is 18 hours later (the next day, locally). Staying in that part of the world, the monthly NZ Milk Auction is today, and historically does affect NZD noticeably. We have a fractal for that. Fed member Dudley (centrist, voter) speaks at 1230, and Fed Governor Brainard (über-dove, voter) is on at 7pm Eastern (0000 Wed).

Remember this is NFP week, so Wednesday’s ADP ’sneak preview’ is always useful. Note that the new Canadian ADP report is not synchronised to be released two days before the official jobs report, so sadly we cannot plan a USDCAD position early. The estimate is 195k, close to the NFP estimate, so a large variation should have an effect. Also published at the same time are productivity and unit labor costs, part of the employment mix. Remember that four more rate hikes are said to be priced in, so a miss will have more effect than a beat. Today’s rate decision is from Canada. A hold is expected, but a rate hike is partially priced in for next month. CAD is of course under pressure because of the tariff announcements and NAFTA in general. Anything dovish could push CAD further down. Fed speakers today are Kaplan (dovish, non-voter) at 0130, Dudley and Bostic (both neutral voters) at 1300. Turkey, Poland and Malaysia also have rate decisions today.

Thursday’s key event is the ECB rate decision. As usual, the rate will are announced 45 minutes before the conference, and it is the latter where volatility usually occurs. Traders will be looking for an update on the long-term projections for Eurozone inflation (HICP), but further statements on unwinding will also be listened for. The BoC Deputy Governor Tim Lane’s speech is important as the first one after the rate decision. Otherwise the Trans-Pacific Partnership (excluding the US of course) FTA is due to be signed. Markets are closed in Russia.

Friday starts with the Japanese rate decision. It will be more interesting than usual after Governor Kuroda’s comments last Friday concerning an earlier exit from QE than expected. Maybe he will clarify further, and more JPY volatility than usual is possible

Otherwise the main event is, of course, the double NFP from the US and Canada. As in previous months, the AHE figure will be key, as an inflation indicator

The US NFP estimate is in line with previous months, but the Canada estimate at 68.5k is close to the record highs of December and January, and is equivalent to a US figure of 616k, population adjusted. If this beats, it must surely make an April rate hike a near certainty, and reverse CAD’s dismal record recently. There has also been talk about Canada being exempt from the new aluminum and steel tariffs as part of NAFTA, any firming up of this would also be a shot in the arm. Definitely one to watch. Also important in the Asian session is Chinese inflation. The Fed speaker roster is Rosengren (hawkish, non-voter) at 1740 and Evans (dovish, non-voter) at 1745. Finally as Oil seems to be responding to the API and EIA weekly stock reports, it is worth watching the response to the rig count.