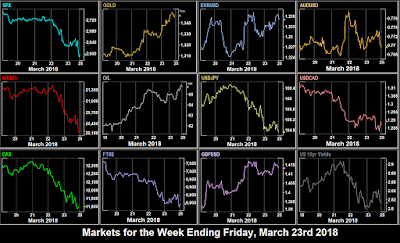 Monday March 19
Monday saw the Facebook scandal break, concerning the use of 50m accounts for political purposes. The stock had its worst day in nearly four years, falling nearly 7%, which, together with lingering fears about a trade war, inevitably cast a shadow over the whole equity market. NDX fell 2.2% (FB is 5.13% of NDX), SPX by 1.4%, and DAX, NKY and FTSE followed suit, the latter exacerbated by a strong showing in GBP. The DAX index made a ’death cross’ where the 50-day moving average moved below the 200-day moving average. USD was mixed, with GBP (above 1.40 again), EUR, CAD and Gold advancing, whereas AUD and JPY retreated slightly. Oil was more or less flat, and 10-year US Treasury Bond yields were up 6bp at 2.857%

Tuesday March 20
Although Facebook continued to decline, in general it was Turnaround Tuesday as both equities and USD recovered. All indices were up, but only recovering a part of Monday’s losses. Even NDX managed a small 0.22% gain. The dollar’s rise into the expected rate hike is not unusual, and USD advanced against Gold and all currencies except CAD which continued to recover from the eight-and-a-half month low set last week, benefiting also from a sharp upturn in Oil (due to further Middle East tensions, and the contract expiry), and its status as a country most likely to exempted from the Trump trade wars to come. NZD had a particularly bad day down 0.83% after the poor milk auction figures. US yields were up again, into the FOMC, putting on 4bp to 2.88% 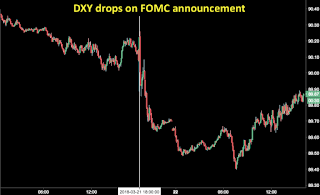 Wednesday March 21
Tuesday’s recovery from Monday was slight, and today markets gave up that slight recovery, although there was not much volatility. SPX and DJIA ended only 0.2% down, and NDX 0.3% down. DAX, FTSE and NKY were also in the red. The FOMC duly delivered their widely expected 25bp rate increase, which caused an sharp 0.75% drop in DXY. All currencies (and Gold) were up. In particular CAD was up 1.29% on NAFTA hopes and another big rise in Oil, which in turn was up 2.81% (and 5.31% so far for the week) on fears of new Iranian sanctions, and following the 1430 EIA stock beat. Also GBP was up 1.02% after the 0930 unemployment/average earnings beat, and progress in the Brexit transition agreement. Gold was up significantly, posting its best day since May 2017, up rising 1.7% to $1,333. US bond yields did not join the party, suggesting the moves were more driven by the other currencies than USD itself. They were flat on the day.

Thursday March 22
Stocks fells heavily all day today as the US stepped up the trade war by announcing further tariffs on Chinese imports. SPX erased all March’s gains with its worst day since the extreme moves at the beginning of  February, falling 2.5%, with the DJIA giving up over 400 points in the last two hours alone. Other indices fell in line around the world, DAX was down 1.7% and FTSE 1.2% at the cash close and continued to decline in the futures session.

USD was still digesting the FOMC rate hike, which was essentially hawkish (one extra hike in 2019). However, performance was mixed. USD did advance against most currencies, but the risk-off in equities saw JPY, Gold and bonds (inverse to yields) up in line. 10-year yields dropped 4bp. The 7-2 BoE rate decision (9-0 expected, ie two members voted for a hike) gave GBP a brief 60 pip rally to touch a seven-week high on 1.4217, but it quickly faded. Oil was up again, although it posted an inside day.

Friday March 23
The equity rout continued on Friday, after Trump announced yet another replacement, this time NatSec Advisors HR McMaster is out of the door, and more importantly China retaliated with new tariffs against US imports. After falling in Asia, markets recovered slightly during the European session, only to fall again sharply later. There was plenty of volatility, for example DJIA had recovered 400 points from the Asian only to give up 600 points in the last two hours. SPX and DJIA posted the lowest weekly closes since November, the former down nearly 6% on  the week, and VIX hit a six-week high. DAX, FTSE and NKY fell in line.

In currencies, there was a flight to risk-off safety, with JPY, Gold and CHF sharply up. EUR and GBP were also up resulting in DX/y giving up 0.5% on the day. The Canadian CPI beat at 1330 added an immediate 86 pips (0.67%) to the loonie, and although some of this faded, it also ended the day up. AUD had rallied early, but gave up all those gains to end the day flat. Oil continued its advance despite the higher rig count to put on another 2.5% and close at a seven-week high of $65.90. Yields continued to fall, giving up another 2bp on the day.

Last week’s best forex trade was to buy CADJPY, this week’s was to sell it for a 2.73% move. For the second week, shorting SPX was the best index trade. Volatility returned to Oil, but it still moved less than SPX which is unusual.

For once, crypto-currencies were mixed. Bitcoin recovered some of last weeks fade to close up, whereas Ethereum continued downwards. For the first time since we started reporting, the weekly moves were less than 10%. (Our prices are given as at 0000GMT Saturday, three hours after the other markets close.)

Europe and the UK start Daylight Savings Time this week. This means that Europeans and the US are back in sync on timing. DST continues for one more week in Australia. The calendar times shown below are therefore not UK times. UK readers should add one hour (and CET readers 2 hours etc.)

Monday March 26
The week starts off very quietly with no news of consequence. Two Fed speakers today, Dudley (voter, neutral) at 1730 and Mester (voter, hawkish) at 2130.

Tuesday March 27
Another quiet day with only the Eurozone confidence indicators to watch. Today’s speakers are Fed Quarles (0010) and Bostic (1600). Both are FOMC voters but neutral. Hungary, Brazil and Argentina make rate decisions, holds are expected.

Wednesday March 28
The most important economic release of the day and of the week is the US GDP followed by the Personal Consumption Expenditure (inflation proxy). Also in the US, Fed Bostic speaks again at 1700. PBOC Deputy Gov Pan speaks in China at 0200. South Africa makes a rate decision, a cut is expected.

Thursday March 29
The last trading day of the week, month and quarter should see some portfolio rebalancing and therefore volatility across all asset classes. Important releases include German inflation and the YoY and MoM parts of PCE, although their effect is muted by the QoQ figure being released the day before. Note the German national inflation figure is preceded during the European morning by figures for the German regions, so the final figure is less of a surprise. Markets are closed in India.

Friday March 30
The Good Friday holiday into Easter means US, European and Australasian markets are closed. China, Japan and therefore forex trading are still open, but importantly CME Globex observes the holiday, so US index futures will be closed.