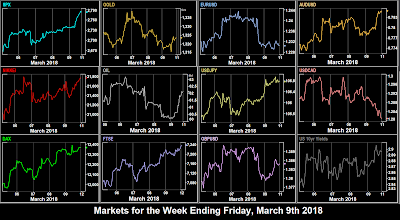 Monday Mar 05
The Italian Election result was as feared, a strong showing for both anti-establishment mavericks M5S, and more ominously, the anti-EU Lega who got a larger share of the vote than FI. DAX and the Italian MIB indices both opened much lower and then moved down, with DAX breaking the psychological 12000. However, the fear was short-lived and the upward trend was resumed. MIB ended a mere 0.42% down on the day and the US and other European indices were up as worries about a trade war dissipated, and the US PMI prints came in as beats.

Currency movements showed us that it was a classic risk-on day, with JPY (down 0.72%) and Gold both falling. The picture was mixed elsewhere. EUR, AUD and GBP were up, whereas CAD was sharply down on tariff fears, despite Oil being up. US Treasury 10-year yields was up 3bp at 2.88%

Tuesday Mar 06
Our chart above seems to suggest a turnaround day on indices. That is because the line separators are drawn at midnight 0000 (see below). In fact by the US closing bell, equities were all slightly up on news at 1100 on talks of a detente meeting between Trump and Kim Jong-Un in April. Indeed, having previously faded after the RBA rate hold at 0330, AUD rose by nearly 1% in two hours on this news and NZD followed it. (KRW rose by 1.3%). The interesting thing is that Japan is also affected by NK stability, but its role as a risk-off haven won out, and JPY gave up 0.47%.

Around the same time, TreasSec Mnuchin said that Canada and Mexico would be exempt from the new steel tariff if NAFTA talks were successful. CAD promptly gained 1% in two hours and rose further after the Ivey PMI beat at 1500. (MXN gained 0.66%). EUR and GBP both liked the first break in the tariff rhetoric, and also shot up. All this resulted in a sharp fall in DXY (down 0.59%) on the day.

Surprisingly, with what seemed like good news Gold and yen did see a Turnaround Tuesdays, and were both up on the day. Oil was down (the API print missed at 2130), and after a lot of choppiness, yields closed flat.

Wednesday Mar 07
During the short closed period (2200-2300 Tue) before the Asian open, Trump’s economic advisor and GS alumnus Gary Cohn announced his resignation (over the tariff issue) which had a momentous effect. The Globex ES_F (SPX) future dropped 42 handles (1.55%), NKY cash opened 0.73% lower and DAX futures opened 1.55% lower at 0700. However, the effect was once again shortlived and SPX and FTSE recovered to end flat on the day. DAX ended up after the EUR ramp was stalled. Only NKY ended up red, partly due to the cash period timing, and also due to a Cohn-led ramp in JPY.

In currencies, once again there was a mixed picture. The Cohn announcement caused a sharp fade in AUD and CAD, and a sharp ramp in JPY. However recovery started almost immediately and AUD and JPY ended roughly flat. CAD of course had another story, the 1.25% rate hold at 1500. This produced a two-hour 90 pip (0.7%) fade in the loonie, which was immediately recovered around 1945, when Mnuchin firmed up the tariff exemption. EUR and GBP were hardly affected, and after a small rise in EUR, and small dip in GBP, both ended flat, and therefore, despite all the intraday volatility, so did DXY (up less than 0.1%). Gold went its own way and gave up most of the previous day’s gain, to end $9 down at $1,325. Yields were slightly up a volatile day.

We mentioned last week that (in the absence of major OPEC surprises and huge volatility) Oil has started to respond again to the EIA Stock print (at 1030 Eastern every Wednesday). And so it did this week, dropping 3% in two hours after the release. However the result was a small beat (+2.408M vs +2.723M), but clearly not the beat traders were looking for. 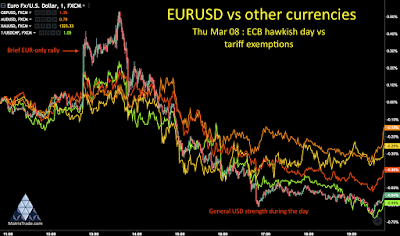 The equity uptrend continued as Trump formally adopted the new steel and aluminum tariffs but gave an immediate temporary exemption to Canada and Mexico, and opened the door for other countries to apply to exemptions. All indices rose steadily all day to finish at their intraday high.

The action on Thursday was in currencies. ECB President Draghis early remarks dropped the pledge to increase QE if necessary, which was hawkish and caused a slight rally. However the downward revision of the Eurozone 2019 inflation forecast, plus an accelerating dollar (on the tariff exemptions) pushed EUR down 148 pips (1.19%) from the rally high. We can see in this chart that it was more a dollar effect as other currencies (and Gold) followed EUR down without particular news triggers. CAD of course did not follow the pattern. The news benefited both USD and CAD, and as you would therefore expect, the pair was nearly flat. CAD edged a win, with USDCAD down 15 pips on the day. JPY also fell but the move was more muted ahead of the BoJ rate decision. Oil continued down, briefly breaking the $60 psychological level before the close. Yields were 2bp down at 2.86%

Friday Mar 09
BoJ Governor Kuroda’s first rate decision meeting since his reconfirmation was watched with more interest than normal, as he had made hawkish remarks setting a timetable for an end to stimulus at the confirmation hearing. In the event, this tone was not repeated at the press conference, and JPY, which had already been falling throughout the Asian session continued downwards, with USDJPY touching a two-week high of 106.95. The of course had a negative effect on NKY which at the intra-session low was 460 (2.1%) down.

More good news came out after North Korea offered to suspend missile tests pending the meeting in April. However, the main news of the day was NFP, which came in as a standout 313k new jobs, only marred by a miss of average hourly earnings. This was a dream scenario for equities in the “good news=bad news, or does it” scenario. The AHE miss is a damper on rate rises, whereas equities love the new jobs.

Equities also love a weak dollar (as we know only too well these last 12 months). Consequently US indices soared, with SPX adding 1.9% from the 1330 to the closing bell, finishing at the highest point since the early February sudden correction, and posting a marubozu (no wicks) candle for the week. Although other indices don’t benefit from the weak dollar, they followed suit. Notably DJIA is 1.5% away from that point, held down of course by steel/aluminum consumer heavyweights BA, CAT and KO. NDX did even better, breaking through 7000 to completely reverse the correction and make a new all-time high. A notable mover on Friday was GS, which dipped 1.3% briefly on the announcement that CEO Lloyd Blankfein is to retire, although it fully recovered later in the session.

The dollar, as mentioned above, was down across the board, with GBP performing particularly well, rising back above 1.39. The confirmed tariff exemption for Canada added 87 pips (0.68%) which completely overshadowed the Canadian NFP miss. AUD was also up sharply, with only EUR and Gold failing to perform and putting in a flat day. Bond yields climbed briefly above 2.9% again, the highest figure since Jay Powell took over at the Fed, and ended the day up 1bp. Oil also bounced strongly from the $60 roundpoint, adding $2 (3.3%) on the day, no doubt partly influenced by the first rig count since Jan 19th.

Reduced USD volatility this week, with AUD, GBP, NZD and JPY all posting inside weeks. Due to all the rate decision, the picture was very mixed with one trade clearly standing out. Buying AUDJPY would have netted 2.87%. Buying any index (except NIFTY) would have been good, the best being, unsurprisingly SPX at 3.36%. Incidentally that was the weakest US index, DJIA put on 3.58% and the NDX and RUT indices rose over 4%. Gold had a second flat week, and Oil was uncharacteristically quiet, although the small total move belies a range of 5.15% in the week.

Cryptocurrencies fell hard again following more negative comments from regulators, although the 16% drop in Bitcoin no longer surprises. Our prices are given as at 0000GMT Saturday, two hours after the other markets close.

Next week is a quieter week than the last few. Note that European traders enter the period we get twice a year where the US and Canada enter Daylight Savings Time two weeks earlier than Europe (and three weeks earlier than Australia and New Zealand leave it), and so all the US releases are an hour earlier for Europeans, and European markets open and close an hour later for US traders. The Fed is in blackout period prior to the rate decision on March 21st, so there are no Fed speakers this week.

Monday March 12
A quiet day with no important economic releases. There is a House election in Pennsylvania which is currently polled as too close to call, despite Trump winning the district by 20% in the presidential race. In Germany Angela Merkel will formally seal her SPD coalition pact prior to her fourth inauguration on Wednesday.

Tuesday March 13
We will have the result of the PA-18 election, and also the most important economic print of the week, the US CPI figure is released at 1230 (not 1330!). According to CME Fedwatch, a rate hike to 1.75% is 89% priced in. A miss here could substantially change that expectation, and move USD and bond yields sharply down. On the central bank calendar we have RBA Bullock at 0010 and Kent at 2210, BoC Poloz remarks released at 1415 (speech at 1430), and the BoJ MPC minutes at 2350. This last one is probably the most interesting, to see if the bank repeat Kuroda’s confirmation hearing remarks about ending stimulus in 2019. In the UK, the Spring Budget Statement (sometimes called the mini-Budget) is released in Parliament, although nothing much is expected.

Wednesday March 14
Several ECB speakers today: Coeure at 0730, President Death at 0800, Praet at 0845, Constancio at 1045, Villeroy at 1330 and Coeure again at 1615. All this follows the German inflation figure and so promises to be a volatile day for EUR. US Retail Sales are less important than usual, firstly because the release is MoM only, and secondly because the release is primarily viewed as a proxy for inflation, which of course has been reported the day before. Note that China Retail Sales are likely to be inflated by the New Year factor. Swedish CPI is released at 0830 (SEK is 4.2% of DXY).

Thursday March 15
Another quiet day, although the SNB Rate Decision is at 0830, a -0.75% hold is expected. In Europe we get the EU27 ambassadors approved text for the post-Brexit relationship and ECB Lautenschlaeger speaks at 1545, Swedish unemployment at 0830, and the NOK rate decision at 0900. RBA Debelle speaks at 2245. Hungarian markets are closed for National Holiday.

Friday March 16
Eurozone inflation is reported at 1000, but this is rarely a market mover, as the likelihood of surprise across an average of 27 countries (who have all already reported) is very low. Of more interest is US Options Expiry, which, together with positions for the Fed next week should produce some volatility in the US session.