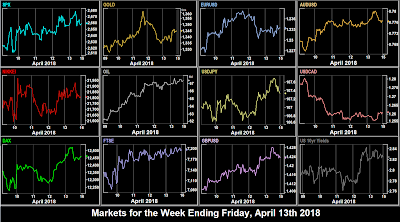 Monday April 09
After the sharp selloff on Friday, the equity markets initially behaved in a similar way to how they did three weeks ago with a strong rally. However, news about the FBI raid on Trump’s lawyer’s office caused most of these gains to evaporate, and SPX, DAX and FTSE only ended slightly up, and NKY was down. Oil rose in line and didn’t fade with the indices. The US dollar was down across the board, DXY giving up 0.3% fairly evenly against all currencies and Gold was down in line. All the volatility came in the early US day. US 10-year bond yields followed equities, as you would expect (flow of money from bonds to equities), and reached a high of 2.814% before receding to close up 1bp at 2.78%

Tuesday April 10
President Xi of China made a conciliatory speech at the Bo’ao Forum on Hainan Island, meaning the threat of a full-blown China-US trade war receded. Markets rallied, helped by the US PPI beat at 1230, and erased the previous days US losses, and even more than that in DAX, FTSE and especially NKY, helped by a weak risk-on JPY, which was the only currency to lose ground against USD, which had a second bad day, with DXY down 0.23%, all other currencies gaining, and Gold and Oil up in line. Bond yields were up a further 3bp, following Monday’s trend.

Wednesday April 11
The tension watched up regarding the Syrian user of chemical weapons with week, with bellicose rhetoric from President Trump, but market reaction varied. Gold, the classic war safe haven soared, touching $1,365, a two month high at one point. Oil rose as the war is in the Middle East, shrugging off the EIA Stock miss. The continuing weak dollar (USD was down for a third day) limited the SPX loss to  0.6% (DJIA 0.9% NDX 0.4% as FB recovered following Mark Zuckerberg’s largely successful Senate testimony). The US CPI print at 1230 was as expected, and did not cause much action. With DAX, the currency situation works the other way, and the German index fell 0.8%. FTSE, which is partially an oil proxy, was only down a mere 0.28%, helped by a 7.2% rise in supermarket retailer TSCO.L on strong earnings.

After an earlier rally, the dollar reversed after the FOMC minutes, and closed down against all currencies except GBP which was exactly flat (moved less than 1 pip in the 24 hour period).  10-year yields attempted to rally but ended 1bp lower.

Thursday April 12
The mood lightened today when Trump said the Syria attack may not be imminent. We now know in hindsight that it happened less than 48 hours later, when markets are closed, showing that Trump can match Putin for guile and subterfuge when required. Readers will remember that the Ukraine and Crimea moves by Putin were usually done at weekends. Markets took his remarks at face value, and it was clear risk-on for the first time this week. Gold, JPY and bonds (inverse to yields) all came off sharply, and all indices were up, particularly DAX as EUR moved firmly down, after the Eurozone Industrial Production miss at 0900, and dovish remarks in the ECB minutes, but also by events in the Russian markets.

Both the MICEX and RUB had been falling all week on the latest round of US sanctions and inevitably there had to be some contagion into Eurozone. Conversely the UK economy is less intertwined with Russia, and GBP was healthily up on the day, moving EURGBP to a nine-month low. It might also be that nothing has gone wrong with Brexit this week, and attention is distracted by Mrs May’s strong stance on both the Skripal poisoning and Syria.

As GBP is only 11.9% of DXY, the index managed to post its first green candle of the week, up 0.28%. AUD and CAD were roughly flat on the day. Oil continues its rally, posting new three year highs.

After languishing all month. Bitcoin showed a remarkable rally around 12:00, ramping $1,110 (15.85%) in 25 minutes. Commentators are variously ascribing this to a fatwa confirming that crypto investing is halal (permitted) for Muslims, the entry of George Soros into the market, money flow to avoid US sanctions by one or more Russian oligarchs, or loss crystallization for US Tax Day. There was virtually no pullback from initial spike and the effect was seen in other cryptocurrencies.

We mentioned paraskevic triskaidekaphobia in last week’s report, and there was certainly Syrian war fear in the trading of US financials. JPM, C, and WFC all beat earnings estimates and opened higher, but then all fell sharply. In the case of JPM (3.19% of DJIA), the intraday drop was 4.28%, producing a textbook example of a bearish engulfing candle, suggesting further downside. The day ended with SPX down 0.3% and DJIA down 0.5%, assisted by the Michigan Consumer Sentiment and JOLTS Job Openings misses at 1400. NKY was also down, but DAX and FTSE were less affected and ended the day flat. Oil was up again, closing its best week since Nov 2016.

USD was down slightly against all currencies except JPY again. Gold and bonds (inverse to yields) were up in line, confirming the three pointers of a risk-off day to end the week. By the way, the only other Friday 13th this year is in July.

As last week, DXY didn’t move much (down 0.33%) as it was supported by the weaker yen inline with the equity gains. Otherwise all currencies gained against USD, and the most volatile yen pair for the fourth week out of five was CADJPY putting on 1.77%. This pair is a good oil proxy, as Canada exports oil, and Japan imports it.

The biggest index mover was DAX, but the standout trade of the week was to buy Oil which posted five green candles for the week for the first time since January.

Crypto-currencies staged a huge reversal/recovery, and carried on rising after our Friday night cutoff point. We have to eat our words about reduced volatility last week after the stunning move upwards, particularly in ETH. Significantly, BTC has broken out of downtrend line, and it remains to be seem whether this breakout is false or real. 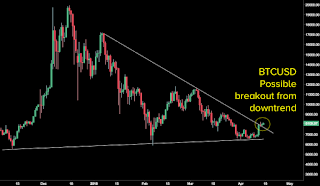 There is likely to be some fallout from the Syria strike at weekend, but inevitably, we can only offer pointers to scheduled events.

Monday April 16
Two Fed speakers on the roster today, Kaplan (centrist, non-voter) at 16:00 and Bostic (centrist, voter) at 17:15. BoJ Amamiya speaks at 08:10. The only economic release of note is US Retail Sales at 12:30. The earnings season kicks off properly with BAC before the US open and NFLX after the close. There is a rate decision in Israel, and markets are closed in Thailand.

Tuesday April 17
A bit more news today, the most important probably being the UK Average Earnings. A May GBP rate hike is largely priced in, so a miss here would almost certainly derail sterling’s stellar performance recently. The RBA Minutes are unlikely to surprise. Five Fed speakers today: Williams (hawkish, voter) at 13:15, Quarles (centrist, voter) testifying to the House at 14:00, Harker (centrist, non-voter) at 15:00, Evans (dovish, non-voter) at 17:10 and finally Bostic (centrist, voter) at 22:40. Japanese PM Abe is meeting Trump again at Mar-A-Lago. Golf, tariffs and Kim Jong Un are on the agenda. DJIA heavyweight GS (7.23% of the index, second only to BA) reports before the open, and index bellwether IBM report afterwards.

Wednesday April 18
Another key print in the run-up to the BoE May meeting is the UK inflation. This will certainly move GBP and needs to be viewed in conjunction with Tuesday’s worker earnings. The BoC are expected to hold rates at 1.25%, so their inflation target, also published in the minutes will be key. Two more Fed speakers Dudley (centrist, voter) at 19:00 at Quarles again (centrist, voter) after the bell at 20:15.

Thursday April 19
Australian ‘NFP’ predicts 31.5k new jobs, nearly double last month’s figure. This would equate to 425k in US terms, given the US has 13.5x the population. A miss, coupled with any surprise dovish RBA remarks could halt AUD’s current run upwards. Note the NAB Confidence data an hour before.

Fedspeak continues unabated, with Quarles (centrist, voter) continuing his testimony, now with the Senate at 13:30, Brainard (was a dove, now more centrist and therefore more interesting, voter) at 12:00, and Mester (hawk, voter) at 2345. UK Retail Sales (inflation proxy) are less interesting than usual given the actual CPI data earlier in the week. The Canadian ADP jobs report today is of less use when, unlike the US, is not released in the same week as NFP.  Israel is closed for Independence Day.

Friday April 20
The main event of the day is the Canadian inflation print together with Retail Sales. Japan also reports inflation in the Asian session although this rarely moves markets. One Fed speaker today Evans (dovish, non-voter) at 13:40. Beleaguered giant GE reports after the bell. Its recent fall in price means it is now the lightest component of DJIA at 0.38%. It is the oldest component, continuously present for 110 years, but any further declines could result in it being ejected soon. Watch out of course for any further geo-political tensions as military one-off events tend to happen at weekends.