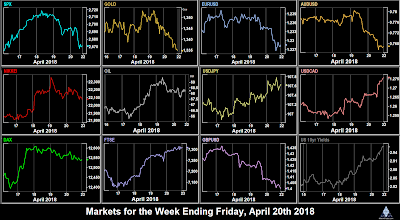 Monday April 16
The upward movement last week continued on Monday, pushing SPX back into positive territory for the year, as markets realised, like the April 7 2017 Syria strike, this was a one-off, and great care had been taken not to hit Russian assets. However the index only closed 0.8% higher, as financials lagged despite BAC beating earnings estimates. US Retail Sales at 1230 were at estimate, and so did not affect things.

A poor day for the dollar left NKY flat, and DAX and FTSE slightly down, the latter being also hurt by a 7% fall in Russian miner EVR. All currencies (and Gold) rose against the greenback. Oil was down slightly after last week’s stellar run. US 10-year Treasury yields were virtually flat (up 1bp). NFLX beat after the close and rose over 7% in the after-hours market.

Tuesday April 17
The NFLX result gave a kick to NDX today, which was up 2.75% at one point. DJIA was buoyed by the GS beat, and SPX was up 1.1% on the day, as were the non-US indices. DAX soared as EUR came off following a miss on the German ZEW sentiment report at 0900, the weakest for five years. The DAX component companies generally sell much more outside Germany than within it, so the DAX index is ‘more global’ than the Euro. Hence why you get the odd effect of bad news from Germany causing the German index to rise.

A similar effect happened with the FTSE, as after hitting a new post-Brexit high of 1.4376, GBP fell on the Average Earnings miss, which we flagged last week as important. NKY was also up in line with SPX, but Chinese stocks were further down after the mixed GDP report and more comments by Trump about CNY, and by inference Chinese trade in general. (He also attacked RUB but that was well down anyway). There was a knock-on effect on HKD, which hit the weaker end of its peg ($7.85).

Otherwise, the currency and commodity picture was mixed. AUD and Gold fell slightly, in line with EUR and GBP, but CAD, JPY and Oil were up slightly. Once again, bond were calmer, the 10-year yield was 1bp lower. Note the 2-year yield hit a 10-year high of 2.39%.

Wednesday April 18
Today was the turning point in what proved to be a lambda (inverted-V) shaped week for SPX, and particularly DJIA where the GS beat was followed with a IBM miss after the Tuesday bell. IBM is only 4.08% of DJIA but there is a sentimental factor which regards this 86-year old index member as a bellwether. It missed less than 1% (EPS $1.81 vs $1.83 estimate) yet the price fell over 8%. However a 3.1% surge in oil to a new four-year high (despite the EIA miss at 1430), helped energy stocks, and SPX and DJIA closed flat.

NKY rose sharply in the Asian session on positive North Korea news and remained fairly flat during the futures session. DAX declined slightly after the run up the previous day, and FTSE rallied following the fall in GBP after the 0830 UK inflation miss.

Currencies were mixed, with CAD joining GBP going south after the rate hold at 1400 and dovish BoC comments at 1515. EUR was flat, and AUD and Gold were noticeably up, as were yields which added 6bp to a four-week high of 2.87%.

Indices all fell today as geopolitical concerns continued, as well as Trump’s various troubles. Only FTSE managed to post a green candle after GBP fell sharply as BoE Governor Carney suggested there might not be a rate rise next month. HSI and CSI300 rallied as China trade war fears receded.

All other currencies and Gold fell against USD, AUD being the weakest, down 0.69%. Today was the day that EURCHF finally breached 1.20, the old peg figure used before Jan 15, 2015. The pair touched 1.2002 before easing back. Oil briefly touched a new four-year high before pulling back. Yields continued to ramp, up another 5bp.

Friday April 20
The US equity rout continued on Friday, with SPX giving up nearly all its gains for the week (see table below).  NKY and DAX followed suit, however FTSE bucked the trend as GBP continued to slide on the Carney comments. DXY had its best day this month, putting on 0.4%, as all currencies (and Gold) gave up ground. CAD faded 0.65% after the miss at 1230 on the inflation/retail sales print. 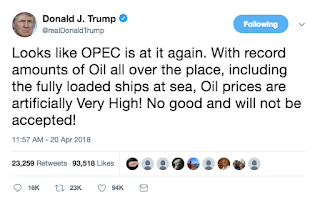 After attacking stocks (AMZN) and currencies (CNY, RUB) Trump now $IBMturned to commodities, and said oil was too high. How he proposes to change a global market is unclear. The price spiked down on the tweet but ended up flat on the day.

The dollar rebounded this week, and most currencies reversed their gains of the previous week. The kiwi receded most, so selling NZDUSD would have been the best forex trade. Indices were much flatter, with only NKY managing to move more than 1% on a weaker yen. Oil held onto last week’s stellar gains but didn’t move much further. The crypto-currency recovery continued strongly following last week’s gains, with once again ETH performing even more strongly than BTC.

The final week of April (not quite, the month inconveniently ends the following Monday) continues into earnings season.

Monday April 23
The new SecState Pompeo faces an approval vote in the Senate (likely, but not a foregone conclusion). No Fed speakers today, but we have BoC Governor Poloz at 1930 (important after the dovish remarks last week), ECB Coeuré (hawkish) at 1400, and RBA Kent at 2200. Turkish markets are closed. GOOGL reports after the bell (earlier than originally scheduled), one of 61 companies reporting. England’s National Day St George’s Day is not a public holiday.

Wednesday April 25
An extremely quiet day for economic releases, and although ECB Villeroy, Knot and Lane are speaking in France at 0800, monetary policy in unlikely  to be mentioned. Australia and New Zealand are closed for ANZAC Day, so all we are left with is earnings. Out of 291 companies reporting, the most notable are aluminum consumer and DJIA leader (9.53% of the index) BA, and steel consumer F, along with NYFANG 10% component Twitter before the bell, and recently troubled NDX giant (5.24%) FB after the close.

Thursday April 26
Earnings season peaks for this week with 403 companies reporting, including AMZN (moved forward from May 2), MSFT, BIDU and INTC, collectively 23.37% of NDX all reporting after the bell, along with US Steel (X), the tariff beneficiary. Before all that, we get the important ECB rate decision, and minutes/conference 45 minute later. Commentators are looking for any change in the taper policy. ECB Nouy speaks at 1520. The SEK (4.2% of DXY) rate decision is at 0730.

Friday April 27
Only 99 earnings reports today, most notably the two oil giants XOM and CVX (collectively 5.66% of DJIA). ExxonMobil is before the bell and Chevron afterwards. Japan is in focus during the Asian session with the rate decision following shortly after the Tokyo inflation report. Both UK and US report GDP today, the latter also reporting the probably more important PCE, an inflation proxy. Remember that employment and inflation is the Fed’s dual mandate, not growth itself. ECB speakers today are Mersch (twice 0545 and 0800) and Lautenschläger at 0645. The South African JSX is closed for Freedom Day.