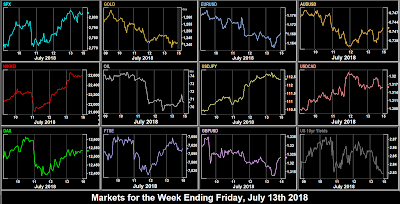 Monday July 09
Monday saw the the previous week’s equity rally continue, with all indices up following the German Trade Balance beat at 06:00. In particular NKY had its best day since April 2, adding 1.53% on JPY weakness. This was led by XLF, which rose 2.3%, its best day since March, as attention moved from tariff to Q2 earnings. Currency activity was mixed, with AUD up, NZD flat and EUR, CAD and JPY down, the latter shedding 0.39% in line with the risk-on mood, although Gold was flat. DXY was marginally up by 0.12%

The most volatility was in GBP, which rallied 0.5% on the soft Brexit agreement news, but then gave up over 1.2% on the news that the ‘British Trump’ Boris Johnson (gaffe-prone, isolationist) had resigned from the UK cabinet. As the earlier resignation that day of Brexit Minister Davis had little effect on cable, one can only assume that traders worried about a party leadership bid (and therefore Prime Minister bid) by Johnson. This was also the first time two UK cabinet ministers had resigned on the same day for 36 years. Sterling closed 0.46% down, with a long lower tailed candle. Oil was marginally up (0.3%, which is nothing for Oil) on the day, although notably the BNO/WTI ratio hit a 12-month low. US Treasury 10-Year Bond yields were up 3.5bp tracking the stronger USDJPY.

Tuesday July 10
After the overnight Chinese inflation beat at 01:30, equities were up again on Tuesday although the effect was less marked in SPX and NKY, and FTSE was flat. DAX was the strongest performer today, helped by EUR weakness, and despite a big miss at 09:00 in the German sentiment reports we highlighted last week. SPX fell heavily after the cash close, to close red for ES futures.

DXY had a similar day to Monday (up 0.11%) but the composition was different. AUD, GBP, NZD, Gold and yields all had Turnaround Tuesdays and reversed the previous day’s action, whereas EUR, CAD and JPY continued to fade. Oil again made marginal gains. In short, a dull day.

Wednesday July 11
As the US confirmed their further $200Bn of tariffs on Chinese imports, the dam broke with equities, and all moved sharply south. The rout started immediately after the Tuesday US markets closed, with NKY shedding 500 points in the Asian session (and ES futures down 1.12%). There was some recovery during the day, but European indices with their earlier close still ended more than 1% down.

Normally, a risk-off move in equities triggers yen (safe haven) and Gold appreciation but not this time. JPY shed 0.92%, its worst day since March. Other currencies and Gold were similarly down, and DXY was up 0.55%. Although CAD spiked up briefly by 0.57% after the rate hike at 14:00, it quickly erased that gain.

The most notable effect of the trade war was in WTI Oil, which faded 5%, its worst day in two years, (Brent fell 6.9%) and this is without any OPEC or Trump news, and notably, in spite of the EIA beat at 14:30 (-12.63M vs -4.49M), the strongest in two years. Despite the dollar strength, yields were down 3bp as money flowed from stocks to bonds.

Thursday July 12
Thursday’s US equity markets saw all the previous day’s losses erased and more. The trend started in Asia, where YM_F (DJIA futures) was up 100 before Europe even opened. SPX hit a 5-month high, and NDX briefly made a new all-time high. NKY similarly made a new high for the month. However, the European indices could only recover in part from the day before. Metals, including Gold also recovered, although Oil did not, sliding further down (although BNO was up, widening the spread).

The forex market was more subdued than usual, with main pairs EURUSD and GBPUSD virtually flat, as were yields. There was little reaction to the ECB Minutes at 11:30, or the Core US CPI print (2.3% as estimated) at 12:30. Overall, the trend was to dollar weakness (against the general trend for the week of dollar strength), with AUD, CAD and Gold up. Only JPY was down, continuing its unlinked pattern. Oil’s fade on 0.33% seemed flat compared to Wednesday. TRY hit a new all-time low.

Friday July 13
The equity rally started to falter. Although DAX and NKY posted gains they were more modest than the day before. FTSE was flat like Tuesday, and SPX faded in early, only to fall at the end and fining flat. Earnings season kicked off today in earnest, with bank heavyweights JPM, C and WFC reporting. Although the first two beat estimates, the market was unimpressed and all three lost ground, to leave XLF flat, and SPX only 0.2% up—which was still another five-month high. The Michigan Sentiment Index at 14:00 missed, as we predicted last week, although it had no appreciable effect.

Forex much the same as the day before, generally, although the GBP and EUR  candles had a long lower tails again as it dipped in early trade after Trump, visiting the UK said that the recently agreed ‘soft Brexit’ plan would hamper a US trade deal, and even that ‘Boris Johnson would make a great Prime Minister’. He later seemed to retract some of these remarks, calling reports ‘fake news’. JPY had a slight recover after four down days.
Gold, which has done its own thing for most of this year, counterintuitively fell. Oil at last turned up a little, and yields were down 2bp in line with the dollar.

After last week’s dip, USD recovered across the board. JPY had its worst week since September 2017, and buying USDJPY was the best forex trade. It is therefore no surprise that NKY was the best index performer, and as in often the case, Oil was the most volatile of all. Cryptos gave up last weeks gains, to sit roughly where they were two weeks ago.

Over the weekend, we saw Trump change his position on the UK trade deal, withdrawing his criticisms of Friday. There was some action from Special Prosecutor Mueller late on Friday, charging Russian intelligence officers with hacking the Clinton campaign in 2016, potentially handing the election to Trump.

Monday July 16
Today President Trump meets Russian President Putin in Helsinki. Trump will undoubtedly speak to the press, and traders will be watching for a softening position on sanctions, and any comments about oil production. This would affect Oil and RUB. US Retail Sales (an inflation proxy) is the important print of the day. Earnings season continues with another bank BAC before the open, but more importantly, NDX star NFLX (2.15% of the index) after the bell. NFLX EPS estimates are usually very accurate. 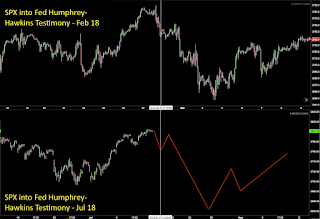 Tuesday July 17
In the UK, BoE Carney and Deputy Gov Cunliffe speak at 08:00 to Parliament about the Financial Stability Report, followed shortly by the nearest thing the UK has to NFP. New jobs are not actually reported, but all the other stats are there, including the important Average Hourly Earnings. The disinflationary version of this (AHE-CPI) is used by central banks to determine whether the public can afford rate hikes on their mortgages.

Wednesday July 18
Attention moves to Europe with the British inflation figure following hot on the heels of the jobs report. These are the figures which will determine the UK rate decision on Aug 2. Given the BoE vote shift in June (where a third of members voted for a hike), we can safely say that beats on both jobs and CPI will have a markedly positive effect on sterling. The second day of Humphrey-Hawkins is usually less dramatic.

More DJIA component reporting after the bell, with IBM and AXP (total 6.67% of the index). Also reporting is former Dow component AA, where it will be interesting to see if there has been any benefit to them from the recent aluminum tariffs.

Thursday July 19
The Australian jobs report estimate is 40% higher than last month, and a beat may provide a boost for beleaguered AUD, which bounced off a 17-month low last week. The estimate of 17k is equivalent to 229k in the US which has 13.5x the population. The UK Retail Sales figure will add to the rate decision picture, although less so as it is only a proxy for CPI, released the day before. Fed Quarles (centrist, voter) speaks at 13:00. NDX giant MSFT (9.6% of the index, second only to AAPL and AMZN) reports after the bell.

Friday July 20
The week ends with OpEx day, the expiry of monthly options, which can cause of course heighten volatility. Fed Bullard (dove, non-voter) speaks at 12:00, and GE reports before the bell, the first earnings release since they left the DJIA after a 111-year run. The Canadian CPI estimate is slightly ahead of last month, but still below the May figure, as Canada still struggles to get traction in this area. As a rate hike already happened last week, it is difficult to foresee any CAD upside on this print.