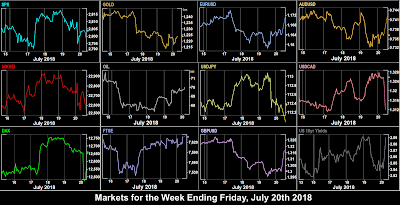 Monday July 16
The week opened with little market movement from the Trump-Putin meeting, but a strong effect from 3.79% plunge in the price of Oil. (BNO was down 4.6%), on concerns about Libya production resumption, and OPEC output increases generally. Most markets were down, particularly FTSE (down 0.8%), which is an oil proxy, but oil-free DAX was slightly up. SPX was helped by gains in XLF (after the BAC beat on earnings) balancing a 1.2% fade in XLE, leaving the primary index only 0.1% down. The big event was NFLX earnings. This over-extended stock actually beat on EPS, but underwhelming subscriber growth precipitated a 13% drop after hours. Other NDX heavyweights dropped in sympathy, as QQQ trades hit stops.

It was a quiet day for USD, with hint of downside across the board. DXY down 0.19%. Gold was flat in line. Surprisingly US Treasury 10-year bond yields were 3bp up, and the yield curve (US10Y-US02Y) widened by 1bp. NZD shrugged off the CPI miss at 22:45.

Tuesday July 17
Jay Powell’s optimistic Humphrey-Hawkins testimony at 14:00 delivered a Turnaround Tuesday in both equities and USD. All indices rallied strongly, with NDX, which opened 0.9% lower, but closed 0.63% high posting a prominent bullish engulfing candle. GS and JNJ both beat, but only the latter advanced.

The risk-on indicators (Gold -1.04% and JPY -0.53%) fell noticeably, as did all other currencies. GBP fell particularly hard on further Brexit worries, as the UK ruling Conservative party continues to squabble internally. Average earnings, the first of the three UK prints this week came in as estimated. 10-year yields were up 1bp, but the two year note advanced 2bp, cancelling Monday’s curve widening. Notably the 3-month note rose 4bp to 2.02% on Powell’s remarks, the highest yield in a decade. Oil slid slightly ahead of the API stock miss.

Wednesday July 18
With the second day of upbeat Powell testimony, It was a flatter, but still positive day for USD, with Europe weakened by the CPI misses in the UK (08:30) and Eurozone (09:00). All currencies (and Gold) dipped down against the greenback in the Asian and European sessions, but AUD, JPY and CAD climbed back later to post modest gains, the latter helped by Oil reversing back up by over a dollar, despite the EIA miss at 14:30. The net effect was a flat (up 0.06%) DXY, although USDJPY did break 113 intraday, a six-month high. Equities showed a similar pattern, flatter but still up, except NKY which dipped slightly. 10-year yields were up 2bp widening the curve as the 2-year bond remained flat. AA earnings beat, but the stock fell as 2018 guidance was downgraded because of tariffs. AA operates three smelters in Canada, which will be subject to tariffs. 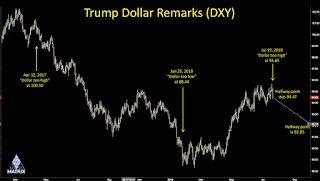 Thursday July 19
Equities fell today on trade war concerns again. The exception was FTSE which managed a modest gain, buoyed by a weak GBP which hit a 10-month low, after the Retail Sales miss at 08:30 added to Wednesday’s CPI miss. Chinese stocks also fell and CNY fell to a 12-month low against USD.

USD had been doing well until President Trump said he was “not thrilled” by the Federal Reserve’s interest rate hiking policy and said a strong dollar “puts us at a disadvantage”.  The comment, at 17:00, immediately knocked 0.54% off DXY, and 0.71% off USDJPY. Some recovery, coupled with GBP (which hit a new 2018 low) and an equally weak CAD left DXY flat for the day. AUD (not part of DXY) was down 0.57%, despite a stellar jobs beat (51k vs 17k estimate). Gold was down $3 after earlier touching $1211.45 a 12-month low. WTI Oil was slightly up, but Brent fell, and the spread between the two fell sharply by over $1. Yields fell 3bp in line with the weaker dollar.

Friday July 20
Further remarks by Trump about tariffs on Chinese goods, plus his remarks about the dollar continued to upset markets. All indices were down, particularly DAX which fell over 1%. NDX however manage to end the day flat, after MSFT beat earnings after Thursday’s bell and put on 3.34%, although some of this faded during the day. Some of the movement today can be attributed to option expiry.

There was minimal movement in many currencies this week, especially AUD and CAD. Both NZD and JPY recovered, but GBP was hit by continuing Brexit turmoil. The best trade would have been to short GBPJPY. Indices were even flatter, with the tiny 0.16% drop in NKY being the strongest mover, belying a 400 point intra-week swing. Cryptos recovered, with BTC noticeably outperforming ETC.

Another G20 meeting in Buenos Aires for finance ministers and central bankers this weekend. TreasSec Mnuchin is there. Trade wars are likely to dominate.

Monday July 23
Today is fairly quiet. BoE Broadbent (centrist, voter) speaks at 17:00. Singapore inflation is released and Egyptian markets are closed. AABA, which is Yahoo Japan plus the BABA holding reports after the bell.

Tuesday July 24
The day opens with German and Eurozone Markit PMIs, with all three prints (Manufacturing, Services, Composite) released simultaneously for each region. There is a public hearing on $16Bn of proposed tariffs on China, for consideration by the USTR. The UK Parliament goes into recess until Sep 4. There is a rate decision in Turkey. The first of three FANG earnings reports this week, GOOGL, comes after the US closing bell.

Wednesday July 25
Some political news on Wednesday; Trump campaign manager Paul Manafort’s trial opens in the US, and SecState Pompeo testifies to the Senate Foreign Relations Committee. As well as North Korea, he will be asked questions about the Trump-Putin summit. EC President Juncker is scheduled to meet President Trump for trade talks. The German IFO business sentiment indicators (Current Assessment, Business Climate, Expectations) have similar estimates to last month’s prints. It remains to be seen if they miss, like the investor sentiment figures on July 10 did. FB reports earnings today after the bell, as do KO, BA (before the bell) and V (after the bell). BA, KO and V make up 14.62% of DJIA, with BA 9.61% on its own.

Thursday July 26
Today’s ECB rate set meeting would normally be the big event of the week, but little is expected (ie continuity) at this summer meeting. As always any fireworks will be at the press conference, not the actual rate release. If anything, a tendency toward dovishness is expected. The third FANG earnings report in as many days is AMZN, who report after the bell along with INTC. These two comprise 13.57% of NDX. Also reporting before the bell today is MCD, which is 4.26% of DJIA.

Friday July 27
The lead story today is the Q2 US advance GDP release, with an estimate of more than double the last one, along with PCE (inflation proxy) figures. Bullard (dove, non-voter) makes the only Fed speech this week. Before the opening bell we have earnings from TWTR (surprisingly not in NDX), and also oil giants XOM and CVX, which together make up 5.51% of DJIA.