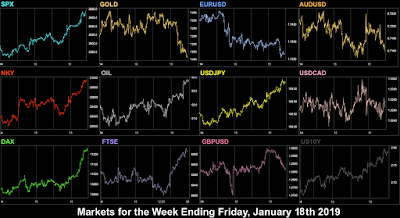 Mon Jan 14
Markets were down today after huge imports (-7.6% vs +5.0% est) and exports (-4.4% vs +3.0% est) figures from China. The trade balance beat, and hit a new high at $57.05B vs $51.53B estimate, but this just reflects the fact that imports fell a lot more than exports. Good, maybe, for China (Onshore CNY hit a six-month high), but not for the rest of the world that imports to them, and US and European indices duly fell.  The dollar had a quiet day, with JPY and Gold advancing slightly on the risk-off mood, and Oil softening for the same reason. 10 year bond yields rose slightly. The first major earnings release C beat on EPS but missed on revenue, but nevertheless managed to end of 5% on an SPX down day.

Tuesday January 15
The big news of the day was the British Parliamentary Brexit vote, which was widely expected to fail. GBP had slid all day, and was down nearly 2% at the time of the vote. PM May lose by the worst margin of any British parliamentary vote in history, but traders hate uncertainly, and at least the vote is over (and some parliamentary manoeuvres make a no-deal less likely). Once the result was in, sterling then rallied 1.76% in an hour to close the day flat. US markets were rallied by strong results from JPM, and a set of Chinese stimulus measures (eg tax cuts), and after shaky start ended the day comfortably up, with NDX adding 2%.

EUR was hit by a double whammy today, firstly in the morning on the Brexit uncertainty, and then after a dovish speech by ECB President Draghi at 1500, saying recent economic developments have been weaker than expected. JPY, Gold were also down and Oil was up on the risk-on mood, resulting in the dollar rising 0.35%. Yields dipped at the open but ended flat. JPM missed on both EPS and revenue, and gapped down 2%, but followed the upbeat mood and closed slightly up on the day. WFC also missed on both metrics and was less lucky, it finished down 3%

Wednesday January 16
Strong earnings beats by BAC (up 8%) and GS (up 10%) continued the positive mood, and equity markets were up again although not as much as the day before. Oil was also up following the EIA beat at 1530. The GS result gave DJIA a boost over SPX. Only FTSE failed to post a green candle adjusting to the previous evening’s GBP rally. JPY (although not Gold today) predictably fell, although a flat GBP and EUR resulted in the dollar index only advancing slightly. Unusually for a positive day, commodity currencies AUD and CAD were not down. Yields were up 2bp in line with the stronger dollar. The US Retail Sales figure was not published due to the continuing government shutdown, the longest on record.

Thursday January 17
An early US dip following the miss from MS (down 4.4%, after reporting EPS 80c vs 89c) quickly recovered on reports that US officials were looking at plans to scale down Chinese tariffs (even though these were later denied), and all markets ended up, except NKY which was flat due to the timing of markets. The dollar had another fairly flat day, advances against EUR and JPY (and Gold) being offset by another strong day on GBP which added 0.76% on hopes that no-deal Brexit can be avoided. AUD had an unusual sharp rally at 1800, which faded quite quickly. Oil had a flat day, as did yields. NFLX reported after the bell, beating on earnings but missing on revenue, and the stock slipped after hours.

Friday January 18
Stocks were sharply up on OpEx day, with all US indices adding around 1.3%. DAX did even better with its best day since the bottom reversal on Dec 27. Part of this was pushing through the SPX/DJIA 50% technical reverse (from the all-time high down to the Dec 24 low), but was also attributed to a Bloomberg report that China would ramp up US goods purchases to reduce the US-China trade deficit, and comments that the administration was sensitive to the Q4 market crash. Oil was also sharply up in line, as was USD which was up across the board, except for CAD, which was the sole outperformer after the strong CPI beat (2% vs 1.7%) at 1330. Yields rose in line with the dollar.

Please note all figures and percentages given for daily movement on indices are for the cash period. Currency moves are stated in relation to the US dollar. Dollar moves are referenced from the UUP ETF, which reflects DXY.

WEEKLY PRICE MOVEMENT
The dollar was up 0.79% this week, but the picture was mixed, with GBP bucking the trend to add 0.25% as the uncertainty of the Brexit vote was resolved. The weakest currencies were NZD and JPY, reflecting equity risk-on. Buying GBPJPY for 1.39% would have been the best forex trade. Indices were all well up, with DJIA (because of GS and JPM) just pipping weak-EUR assisted DAX. NFLX was static after its recent stellar run, but the other FAANGs outperformed NDX as a whole. Cryptos had a quite week by their standards, with ETHBTC fading for a second week. 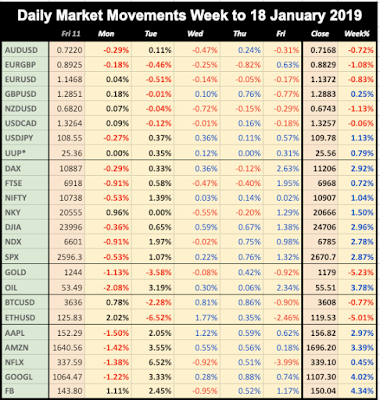 Monday January 21
US Markets are closed for Martin Luther King's birthday. All other world markets are open, and US futures trade normally, but clearly volume will be muted. At some point today, UK PM May will present alternative proposals for Brexit. Commentators are now expecting an extension to the Mar 29 date. Chinese GDP will be watched closely given the recent downturn in imports/exports.

Tuesday January 22
Leaders arrive in Davos today for the World Economic Forum, although notably Presidents Trump, Xi, and Macron and UK Prime Minister May are all staying home to handle their various crises. UK average earnings are in focus, as GBP is so volatile at the moment. Earnings are due from Dow heavyweights JNJ and TRV before the bell, and IBM afterwards. These three companies make up 10.4% of DJIA. There is a rate decision (hold expected) on NGN.

Wednesday January 23
The BoJ decision and statement rarely moves markets, whereas Canadian retail sales often does move CAD sharply. The first business day of Davos may see some interesting speeches, although without Presidents Trump and Xi, anything on the key issue of trade is unlikely. The conference continues until Friday. Earnings are due before the bell from defensive stock PG (2.52% of DJIA), but markets may be influenced by bellwether IBMs report from the evening before (although that status stems from the 1980s when Big Blue was 6.4% of SPX, it is now 0.6%)

Thursday January 24
It’s ECB rate decision day again, but commentators are not expecting any surprises, other than maybe Pres Draghi to repeat his dovish remarks about growth from last week. Earnings are due from six NDX components INTC,  ISRG, WDC, SBUX, AAL and CELG today, all after the bell except the last two. Together they make up 6.1% of NDX. It seems to be an unchanging convention that industrials report before the bell, and tech stocks afterwards. Romanian markets are closed for Unification Day. There is a rate decision (hold expected) on MYR.

Friday January 25
As is usual for Fridays in earnings season, no index majors report today. Next week is the big week of the season. There is also little news other than the three IFO indicators from Germany.