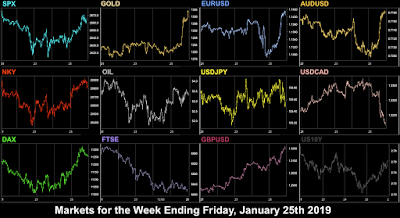 Mon Jan 21
US Markets were closed today for the Martin Luther King holiday, but poor data from China sent US futures down. DAX followed suit, although FTSE and NKY managed to remain flat. It was also a flat day for DXY, with small gains on the major currencies balancing a move down by commodity currencies AUD and CAD (and Oil), in line with the equity risk-off. Surprisingly Gold and JPY did not move up. Bond markets were closed.

Tuesday January 22
Markets continued downwards as the futures losses were translated into cash prices, not helped by mixed German sentiment reports at 1000, a miss on the US Home Sales print at 1500, and reports that the Trump administration had rejected an offer by the Chinese to travel to the US for preparatory trade talks. JNJ beat on EPS and revenue, but lowered guidance left the stock down on the day. IBM however, beat, and more importantly raised guidance. The stock soared after hours to open the next day 7.28% up.

GBP ramped on hopes of a no-deal Brexit, and the AHE and Unemployment beats at 0930. Risk-off responses were as usual. JPY (and Gold) was also up, but AUD, CAD and Oil were down. A slight fade in EUR left DXY flat as a whole. Yields rose briefly but ended flat on the day. There was a late rally from NZD following the CPI beat at 2245.

Wednesday January 23
An earnings beat for PG, and the IBM result from the previous evening gave SPX an early ramp, but this quickly faded with the index giving up 2% in two-and-a-half hours, to recover later and close the day slightly down. Due to their timing NKY and DAX eked out a slight gain, but FTSE fell all day in response to the stronger currency,  as GBP added nearly 1% on Brexit hopes, specifically the ruling out of ’no deal’. British lawmakers are seriously divided on what deal they want, but they all seem to agree that exiting without one would be disastrous.

DXY was down 0.2% as EUR also advanced, as did AUD and NZD. However CAD fell after the Retail Sales miss at 1330, and following Oil down, which was not helped by the API stock miss at 2130 (a day late this week due to the Monday holiday), and JPY retreated after the BoJ statement where the Japanese inflation forecast was cut, a rare example of JPY responding to Japan issues rather than the wider world. Gold and bond yields were flat on the day. Oil was unusual, it fell sharply just as the EIA report (which was a big miss this week) would have been released, but of course it too was a day later this week.

Thursday January 24
Equities were a bit directionless today, with further strong earnings sentiment being tempered by comments from TradeSec Ross that a deal with China was “miles away”. SPX and NKY were up slightly. DAX did better, benefiting from the fall in EUR, whereas for FTSE it was the reverse, as GBP appreciated. DXY was up 0.47% today, mainly due to a sharp decline in the single currency following gloomy European growth predictions from ECB President Draghi at 1330. AUD and NZD were also off despite the Australian jobs report beat at 0030. Only GBP bucked the trend, with EURGBP closing at a nine month low. Oil was up slightly despite the EIA miss (see Wednesday), and Gold was flat. Surprisingly yields were well down despite the stronger dollar. INTC reported after the bell, missing on EPS and revenue, and lowering guidance for 2019. Shares fell 7.2% after hours and in the Friday pre-market.

Friday January 25
The big story today was a report that the Fed is considering an early end to its balance sheet reduction program. After a quiet morning, markets all ramped on the news and the dollar crashed, with DXY down 0.78%. All currencies were well up, and Gold hit $1,300, a six-month high. Oil was up in line with equities. Yields were up as money rotated from stocks to bonds. Towards the end of the day, President Trump finally agreed to end the shutdown for three weeks, despite not getting his Mexican wall funding. If anything, the markets came slightly off on this.

Please note all figures and percentages given for daily movement on indices are for the cash period. Currency moves are stated in relation to the US dollar. Dollar moves are referenced from the UUP ETF, which reflects DXY.

WEEKLY PRICE MOVEMENT
The ramp on Friday meant most markets ended more or less flat on the week, with only FTSE well down on a strong pound. The strongest currency by far was GBP, adding 2.48%, so buying GBPUSD was the best trade. Cryptos had a quiet week, as, in the end did the FAANG shares, in advance of AAPL and AMZN earnings. 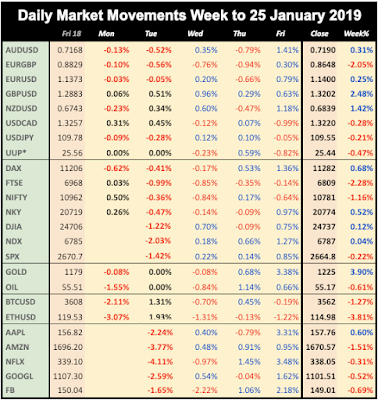 Monday January 28
ECB President Draghi makes the introductory statement at the ECON hearing in the European Parliament today. Tariff-sensitive CAT reports before the bell, but the main focus of the day will probably further reaction to the Fed report from Friday.

Tuesday January 29
There is another Brexit parliamentary debate and vote today in the UK. The optimal outcome this time (short of accepting the deal voted down on Jan 15) is an extension to the Brexit date of Mar 29. The vote expected around 1900. Fourth largest DJIA stock MMM (5.32% weight) reports before the bell, but the big one is AAPL, who report around 2130, and have already pre-warned of reduced earnings. There is a rate decision on HUF.

Wednesday January 30
A big day today. Chinese Vice-President Liu leads a 30-strong delegation visiting the US for two days of trade talks. Expect some soundbites. The rate decision is at 1900, and a hold is expected by all (99.5% priced in on the CME Fedwatch tool). However, the content of the December meeting minutes will be scrutinised, although of course we have already had a lot of dovish signals since the last hike in December. Watch out for the ADP report, the estimate of 178k doesn’t make much allowance for the shutdown.

It’s a big day on earnings, with DJIA heavyweights BA, V and MCD reporting before the bell, along with BABA which is not in any index. At 18.82% total weight, this is the largest single Dow grouping at one point, BA alone is 10% of DJIA. NDX during the day will of course have been influenced by the AAPL report, but after the bell we get NDX giants MSFT and FB (14.35% of the index) along with PYPL TSLA and QCOM (another 3%).

Thursday January 31
Lots of European data today, with the first reading of European Q4 GDP. These preliminary GDP reports do not move the markets as much as the actual, which is several weeks away.  After two rate decisions in minor European currencies, Black Sea neighbours UAH and BGN, and two central bank speeches, the main thrust is likely to earnings. The MSFT and FB results will be joined by troubled giant GE and V’s competitor MA before the bell, but the highlight will be AMZN, reporting after the close. It’s the last day of the month, so some rotation volatility may be expected from those asset managers that report monthly.

Friday February 01
The first day of the new month starts with close focus on the UK PMI (as GBP is so volatile these days), and oil giant XOM (2% of DJIA) reporting before the bell. However, it’s NFP day, with a reduced estimate from usual, probably due to the shutdown which has now (temporarily) ended. AHE and unemployment estimates are unchanged from last month. To finish the week, the important ISM PMI is at 1500, although it doesn’t have the same effect when coincidental with NFP. Note that Canada reports a week later this month, so our preferred USDCAD NFP trade cannot be done.