Mon Feb 04
The week opened on subdued note due to the almost complete absence of Asian trading due to the Chinese new Year of the Pig. Japan was open, but NKY was flat on the day,  as were DAX and FTSE, and trading was light generally. Nevertheless Friday’s momentum continued when the US opened, and SPX added 0.7%. on the day. Yields were down on stock-bond rotation, despite a firmer dollar which was up across the board, with currencies and Gold down. Oil was down on the day after briefly touching a two-month high. GOOGL beat on EPS and revenue after the bell, but the stock fell 2%

Tuesday February 05
The buoyant mood continued for another day, with all indices up. FTSE was particularly strong up 2% after an earnings beat from BP (8% of the index), and a sharp drop in sterling following the UK Services PMI miss (50.1 vs 51.0 est) at 0930. This is particularly worrying as the UK prides itself on being a service (ie skills) economy, and the print is only just above the 50 level, the difference between expansion and contraction. So not everything is Brexit, it seems. NKY had faded in the cash session, but was pulled up in futures. DXY was up 0.25% as EUR also faded (on a German PMI miss). CAD was down slightly, whereas JPY was flat. AUD was up after the RBA rate hold, and surprisingly Gold was up $3. Bond yields pulled back 2bp.

Wednesday February 06
The rally ran out of steam today, after mixed earnings reports, and nothing particularly helpful in President Trump’s State of the Union address the previous evening, but it was probably just fatigue after the 16% gains in the last six weeks. Indices were down across the board with SPX off 0.2%. DXY continued to rise, adding 0.32% with all currencies moving down. Gold followed AUD sharply down (the second day that this proxy relationship worked), after a dovish speech from the RBA Governor. Mr Lowe said that “policy was more evenly balanced” (meaning cuts were as likely as hikes). AUDUSD fell 0.5% instantly and 1.92% on the day. NZD fell 1.74% following Australia, and more severely after the jobs report miss at 2145. Oil and JPY were flat. Yields slipped another 1bp.

Thursday February 07
The mood changed today at 1000 as EC Commissioner Moscovici reported a downgrade of EC growth to 1.3% (from 1.9%) and said that Europe ““does seem to be more affected than other areas by the slowdown in global trade”. Later in the day it was reported that President Trump is not likely to meet Chinese President. Markets were down across the board, around 1% generally, but 2% on DAX on the Europe news.

DXY moved up 0.18%, but there was some variance in currencies. EUR fell on the growth news, and the usual risk-off effects happened, Gold and JPY up, AUD and CAD and yields down. GBP was marginally up. After falling in early trading, it caught a bid on the BoE rate hold, despite a gloomy forecast from Governor Carney. Sell the rumor, buy the news, it seems. Oil fell sharply in line with equities.

Friday February 08
US stocks were more or less flat today, after early selling was followed by a late rally, despite President Trump confirming he would not be meeting his Chinese counterpart before the Mar 1 deadline when Chinese import tariffs rise from 10% to 25%. Other markets were closed when the rally started, and so ended down on the day. DXY was flat. The trend was generally upward, but a surge following the Canadian jobs report (and rise in Oil) left CAD up 0.25%. JPY was surprisingly flat, and yields were down.

WEEKLY PRICE MOVEMENT
DAX was the weakest index this week, clearly diverging from the US. The dollar was up against all currencies, with NZD the biggest casualty. Shorting NZDUSD would have been the best trade. Cryptos staged something of a recovery after several down weeks. The FANG picture was very mixed. 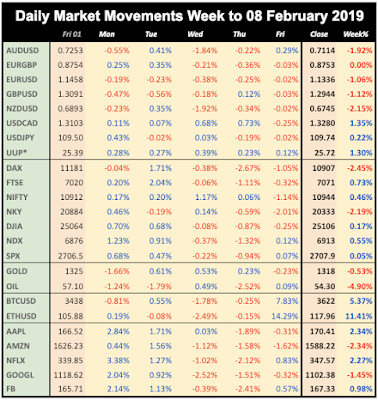 Monday February 11
Markets re-open in China and Taiwan today after the New Year week-long holiday. The only news of note is the UK preliminary Q4 GDP report.

Tuesday February 12
With a main session again devoid of news today, Fed Chair Powell’s speech at the ‘Economic Development in High Poverty Rural Communities’ conference in Missouri is the top-billed item. Also on the Fed roster are the two most hawkish members, Mester (2020 voter) at 2330 and George (2019 voter) an hour later. After the bell, earnings are reported from ATVI, which was suggested as an acquisition target for AAPL in a JPM note last week.

Wednesday February 13
An important day with both UK and US inflation figures. There may be another debate today or tomorrow in the UK parliament on Brexit process. More Fedspeak from Bostic (dovish, non-voter) and Mester again, both at 1350. NDX heavyweight CSCO reports after the bell. There is a rate decision on EGP and SEK, the latter is 4.2% of DXY and exceptionally, fell 1.6% last week. There is no EIA oil stock report this week.

Thursday February 14
USTR Lighthizer and TreasSec Mnuchin resume talks today with China. The Retail Sales print for December, delayed from 16 Jan by the shutdown is released. The German GDP print is important, as a further contraction (not likely) would put the country into a technical recession (two consecutive quarters of falling GDP). DJIA stalwart KO reports before the bell, and crypto-mining vendor NVDA after the close.

Friday February 15
Today is monthly opex day, so expect additional volatility.  KO’s eternal competitor PEP reports before the bell and Chinese ‘BAT’ stock BIDU comes in after the close. The most important print of the day is the Michigan Index at 1500.