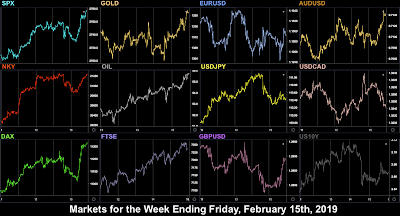 Mon Feb 11
The threat of another government shutdown and President Trump confirming no meeting with his counterpart in China before the Mar 1 tariff deadline led to caution in the US equity market today, with SPX and NDX closing flat, although non-US markets were comfortably up, after last week’s Thursday/Friday pullback, following a bid in China markets as they reopened. DXY—which likes trade war tension—added 0.45% and broke 97 to make a new 2019 high. All currencies, Gold, Oil and 10-year bond price (inverse to yields) were down in line.

Tuesday February 12
A possible deal to avert the shutdown (despite Trump being “unhappy”) was enough to rally markets today with SPX up 1.3%. NDX and DJIA did even better. The story was the same in Europe and Asia, with NKY sharply up at the open after Monday’s holiday in Japan. FTSE could only break even on a stronger GBP. The dollar had a ‘Turnaround Tuesday’ and lost ground against all currencies. Gold and Oil were up in line, but bond yields carried on rising, up 2bp today, the same as yesterday. Fed Chair Powell’s speech had little effect.

Wednesday February 13
Global stocks continued upwards, as President Trump hinted at an extension (to the Mar 1st China tariff hike from 10% to 25%) if a “real deal” was close, although the gain (SPX up 0.3%) was muted after Senator Rubio tweeted that buybacks should be taxed. Buybacks are of course a major reason for market strength.

USD was strong overall after the CPI beat at 1330, with DXY up 0.53%. However (only) NZD bucked the trend, adding 1% after RBNZ said there would be no rate cuts for two years. GBP had a brief 70 pip spike on chatter about an Article 50 (Brexit) extension but this soon faded, and all currencies except NZD, and Gold were down. Oil was up again after comments from the Saudi energy minister, and evidence that cuts were being adhered to.

Thursday February 14
A miss on the final German Q4 GDP QoQ and working day adjusted figures at 0700 (although YoY beat, oddly), followed by a severe miss on the shutdown-delayed December US Retail Sales print (Core -1.85% vs +0.10% est) at 1330 (coupled with a Jobless Claims miss), was enough to send SPX sharply down over 20 handles at the US open, and to finish down 0.3% on the day. Global indices went the same way.  The Retail Sales miss also cause an instant spike down in yields and DXY. The basket finished 0.19% down. AUD joined EUR and JPY in appreciating, but GBP was weak all day, after the UK 10-year bond auction only fetched 1.16% (prev 1.27%). CAD was unusual. The relatively unimportant Manufacturing Shipments (MoM, Dec) print missed badly (-1.3% vs 0.2%), but this was enough to soften it by 0.5% (and 0.9% against JPY). Gold was up in line with the weaker dollar, but although Oil continued upwards. DJIA component KO matches EPS estimates, but reduced forward guidance by 1%, shares dropped 7.5% on the news.

Friday February 15
After falling in the European futures pre-market, DJIA soared on Friday, up 1.74% on trade war hopes, as President Xi said the two sides would meet again next week in Washington. The effect was more muted in NDX which is not as trade war sensitive, but global markets rose on the news, with DAX up nearly 2%. The effect was also helped by the Michigan Consumer Sentiment beat at 1500 (95.5 vs 93). After a brief spike up on the Michigan release, DXY ended slightly down as EUR and JPY were for once flat, but less components GBP and CAD rose. AUD was also sharply up on the trade news, helped by an $8 rise in Gold, and oil continued upwards. Yields were up on stock-bond rotation. At the end of the day President Trump decided he would use emergency powers to get his wall money. Markets were not affected.

WEEKLY PRICE MOVEMENT
After being the weakest last week, DAX was the strongest index this week. DXY was only slightly up, with Brexit-troubled GBP the weakest currency. The reversal also applies in currencies, with last week’s loser NZD being the strongest, therefore shorting GBPNZD would have been the best trade. Another quiet week for cryptos and FANGs as the January volatility fades. 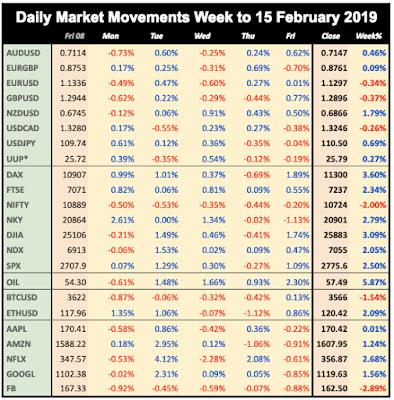 Monday February 18
US Markets are closed for President’s Day (George Washington’s birthday). Asia and Europe are of course open, but as always with US market holidays, a quiet day is expected. There is no significant news.

Tuesday February 19
China Trade talks resume and traders will be looking for soundbites. The earnings season is pretty much over now, but we have the final DJIA component (2.62% weight) China-sensitive WMT reporting before the bell (after last week’s fall in Retail Sales, WMT is the biggest bricks-and-mortar retailer in the world). Fed Mester (hawk, 2019 voter) speaks at 1350.

Wednesday February 20
The most important day of the week, when we read the Fed minutes from their January meeting, where they calmed the market. The risks are to a less dovish internal discussion, which could be bearish for equities, ie neutral could be seen as hawkish. Fed Bullard (dove, 2019 voter) speaks in New York today, as does Kaplan (dovish, non-voter) at 1810. Again there is no EIA Oil stock print this week.

Thursday February 21
The German and Eurozone Markit PMIs are more important than usual because the German estimate of 49.9 is just on the wrong side of contraction/expansion, a move back over 50 would be bullish for DAX. Chinese ‘BAT’ company BIDU reports after the bell. Fed Bostic (dovish, non-voter) speaks today at 1250.

Friday February 22
A Fitch credit rating for Italy is expected today, and the risk is to the downside (which may already be priced, you may remember when S&P didn’t change their outlook a few months ago, the MIB soared). Fed Bullard speaks again at 1830, as do Harker (dove, non-voter) and Quarles (hawkish, voter) at the same time. There are rate decisions on COP and LKR.

This report is published every week as an email by MatrixTrade.com - you can sign up to receive it here. This blog is supported solely by advertising, so if any of them interest you, please click the links. If you want notification when the blog is updated, please follow me on Twitter, Facebook, Stocktwits or Linkedin (all open in separate windows). Details of how I compile the report are here