In a week that saw a substantial increase in coronavirus cases worldwide and particularly in the US which is behind the curve, huge efforts were made by governments globally, not only in the area of fiscal easing, but in employment-related support. Nevertheless, markets had their worst week of the year and indeed since 2008.

Next week, there is still no end in sight to the virus, new cases are still increasing exponentially, as the western world goes into a productivity-destroying lockdown. We are still three weeks away from earnings season, where the extent of the damage will to some extent be quantified, so it looks like another week of whipsaw reaction to each piece of unscheduled news, and huge differences in the performance of individual shares as traders try to work out the losers and (relative) winners in this crisis. We have already seen AMZN and NFLX outperform, whereas travel businesses are suffering much worse than average. Expect more of this going forward. 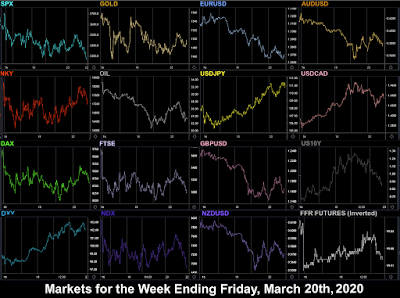 Mon Mar 16
Markets plunged again today, with the DJIA down 12.93%, its second largest single day loss ever, beaten only by Black Monday 1987. The Fed basically cut rates to zero and announced an asset purchase program of $750Bn with no effect on the stock market, but it did depress the dollar, DXY was done with EUR, and curiously, JPY, rising, although other currencies were down, as was Gold. Unlike bonds, these two have stopped reacting in the normal risk-off way. Oil was down an amazing 13%, and bonds were of course sharply up, with the IEF ETF putting in its best day since March 2009, up 2.64%.

Tuesday March 17
After the second worst day in history, SPX today had its ninth best day of the century, and best since the start of this bull market in March 2009, adding 6%, following a $1trn stimulus package announced by TreasSec Mnuchin, which includes possible $1,000 checks sent to every American. It was a clean sweep for USD up across the board, and bonds were down 2.51%, their worst day of the century. However, Oil carried on falling, and Gold was up, bucking the trend in these unprecedented times.

Wednesday March 18
Impatience at the failure of fiscal measures, and the government’s efforts being seen as falling short led to another down day and a new low, the ninth worst day this century, three of the worse days being in the last two weeks. There are a few winners in this crisis, WMT shares today hit $128, a new intraday ATH.

Another clean sweep day for USD across the board, with AUD, GBP and NZD collapsing over 3%. Oil had its second worst day of the century, beaten only by last week. It dropped 17.51% to as low as 20.10 at one point, a level not seen since 1991,  which had a huge effect on oil companies, for example CVX dropped 22.1%. All three haven assets Gold, Bonds and JPY were also down, the first time for a long time that not even one responded in line.

Thursday March 19
Markets took a breather today, and were more or less flat (by current standards, for example DJIA was up 0.95%). The Dow still took a 1,400 point journey to do this. Tech and FANGS outperformed and you can see from the table that crisis winners such as AMZN (isolation delivery) and NFLX (isolation leisure) outperformed. At HOD, these two were only 11% down from the pre-crash top, compared to 27% for SPX as a whole, 60% for AAL, and 70% for BA, both of which are back at 2013 prices.

The US dollar had a third day up against all currencies (and Gold). Bonds were up slightly, but the most noticeable move was Oil, posting its best day of the century, up 14.01% but still under the 2016 support level which is now resistance.

Friday March 20
The Fed announced even more stimulus today, and markets rallied hard, during the Asian and early European sessions SPX futures rose by 6%. However from 1000GMT, as NYC traders opened their desks, they slid again by nearly 10% to close 4.34% down on the day and 14.98% down for the week, the worst since 2008. DJIA’s performance was even worse, down 17.3% largely due to certain key stocks such as BA. Oil was down 8% in line, the 14th worst day of the century hardly being mentioned.

After three days up against all currencies, USD finally reversed slightly and was down across the board. This meant that all three haven assets (Gold, Oil and Bonds) moved up.

WEEKLY PRICE MOVEMENT
The top forex trade for a second week was to sell AUDUSD, down a further 6.28% and at one point down 11.02%, but still at levels not seen since 2002. Our USDJPY play last week did not work, despite markets falling, and we lost 2.81%. This brings the seven week total to 3.56%, and 3 out of 7 trades right. This week’s trade is to buy AUDNZD.

The biggest index move was DJIA, and the biggest overall move Oil, down 29.02%, its worst week since January 1991. Bitcoin added a round 10% whereas ETH hardly moved. FANGS were varied, with isolation-friendly AMZN and NFLX bucking the trend. 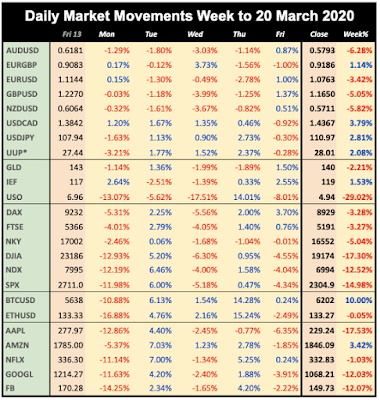 Monday March 23
Another week where everything will be dominated by coronavirus, and in particular statistics coming out of the US, which is behind the curve in the pandemic. The German Bundesbank monthly report is published today.

Tuesday March 24
Notably we have a raft of PMIs (all three manufacturing, services and composite) which are for March and so should show the effect of the virus so far. Note all estimates are still currently similar to last month’s figures. Also there is a German Constitutional Court Ruling on the legality of the latest round of ECB QE. We have been here before, and nothing market-shaking is expected. There is a rate decision in Hungary. Markets are closed in Argentina, Indonesia and Greece.

Wednesday March 25
The RBNZ already made an emergency rate cut to 0.25% on Mar 15, and the currency is already at 2009 lows. It is difficult to see what impact the meeting would have. There is a rate decision in Thailand.

Thursday March 26
As with New Zealand, the BoE have already made their emergency rate cut to 0.1%, so little is expected today. Of more interest is the US Jobless claims figure, which peaked last week, and is a more current barometer on the virus crisis. As well as the UK, there are rate decisions in Czechia and Mexico.

Friday March 27
The key report today is the Michigan Consumer Sentiment Index, already well down, and the estimate suggests further substantial decline. Previous Fridays have shown large moves in the US afternoon session, there is no reason for this to be different. There is a rate decision in Egypt.