In a week where the only thing the market cared about was coronavirus, neither the first emergency rate cut since 2008, not a the blowout NFP report had any effect, even in the short-term. The market did a technical 50% reversal from last week’s low, and then continued down, in a similar pattern to previous ‘dead cat bounces’. The dollar was similarly untouched, the rate cut drop being hardly noticeable in the week’s trend. In this midst of this turmoil, OPEC decided against further production cuts, causing Oil to plummet nearly 10% on Friday to a three and half year low.

There is no sign that sentiment is improving, or that positive economic news next week will help. Only the Chinese CPI figures (where February encompasses the outbreak) on Tuesday, and possibly the Michigan Consumer Sentiment on Friday may give us clues. Meanwhile it remains to be seen what stimulus the ECB provides on Thursday, to join fiscal loosening already seen in the US, Canada and Australia. 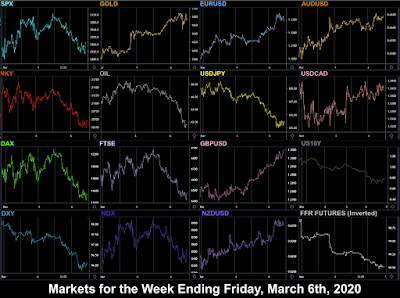 Mon Mar 2
The Chinese PMI came in at 40.3, down an unprecedented 20% from last month’s 50.1. However the bounce from last week was inevitable, as markets expected central bank action and recovered, with DJIA up over 5%, and at 1293 points, its largest points gain ever.

Apple was up 9.31%, its best day since 24 Nov 2008. Markets around the world followed suit, and Oil had similar gains. There was a rebound in USDJPY in line, and GBP was also down.

Bonds were down in line, but Gold was slightly up, again showing that it is the least reliable of the haven indicators.

Tuesday March 3
Today the Fed made an emergency (between meetings) rate cut of 50bp at 1500. This caused a 3% spike up in markets which lasted literally for a few minutes before they plunged again, as traders were spooked by the ‘official’ acknowledgement of the crisis. USD was already falling, and you can see in the chart the minimal size of the rate cut move overall. Australia cut rates by 25bp which also had surprisingly little effect. The only currency worse than USD today was CAD, which fell in anticipation on the Canadian decision on Wednesday.

Markets gave up about half Monday’s gains. Oil followed them down although only slightly, on OPEC hopes. Gold, Bonds and JPY all rose sharply of course, the first up 3.14%, its best day since 24 Jun 2016, nearly four years ago. 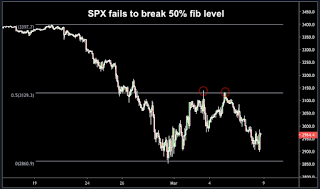 Wednesday March 4
Another wild swing and massive up day. This time there was another cause. The surprise turnaround by Joe Biden winning Super Tuesday, and clearly back in the race.

The Biden factor was clear in the XLV (Healthcare) ETF, which had its sixth best day this century, and best since 28 October 2008. Also there was good news as emergency COVID funding of $8 billion was agreed by Congress., more than had been expected.

Markets were up nearly as much as Monday, and touched a 50% retracement from the all-time highs and the Feb 28 bottom, although this proved to be the high watermark for the week. Oil was slightly down, perhaps reflecting its status (alongside transports) as a forward indicator.

DXY was actually green today, but this move was mainly due to a 0.61% pullback in JPY, falling along with Bonds, although EUR also pulled back after a very strong run, as did CAD after the surprise Canadian rate cut. Gold continued its disconnect and rose slightly.

Thursday March 5
The 50% retracement resistance proved too much for markets, and they fell again as California, the largest US state declared a state of emergency. SPX was 3.39% down, its worst day of the week, although not as bad as last Friday. Bank stocks fell particularly hard after the rate cut, with the XLF Financials ETF dropping 4.82%, its worst day for two years. World indices again fell in line, as did Oil.

There was a slight pullback in AUD, but otherwise currencies outperformed USD again, as would be expected, and the havens behaved as expected with JPY, Gold and Bonds all up.

Friday March 6
Today the number of COVID-19 cases passed the symbolic 100,000 mark, although there was no specific other news. The NFP print was a blowout beat (273k vs 178k est) with a beat on unemployment and AHE in line. There was also a trade balance beat at the same time. However, these surveys predated COVID-19 in the US, and the response was almost unnoticeable, a brief 0.5% rally which quickly faded. Cash markets then declined, and only a rally in the last hour, whilst making the day red managed to make the week green, just. SPX closed 0.61% up for the week.

The big story of the day was Oil, which fell nearly 10%, its worst day for 11 years, and fifth worst of the century, after OPEC rejected additional production cuts.

USD fell again, even more sharply than earlier in the week, mostly in the European session. Only CAD did worse, and again the haven trio was up on the day.

WEEKLY PRICE MOVEMENT
The top forex trade this week was to sell CADJPY, down 2.69% and our own pick two weeks ago. Our pick last week, to sell EURNZD failed, the pair was up 0.51% (not as bad as the one I nearly picked: buy NZDJPY, down 0.67%. The running total after five weeks is 80% success, 7.52% profit. My cross pick for this week is to sell GBPAUD. The Aussie still rose after the rate cut, and GBP may well fail on the UK Budget, and any possible loosening anticipation. I would probably be a buyer of SPX but only after it retouches the Feb 28 low.

DAX was the worst equity market for the second week running, probably again on EURUSD strength (up 2.38%). Cryptos recovered about half of last week’s losses, and FANGs varied enormously, with AAPLs gain only slightly less than FB’s drop. 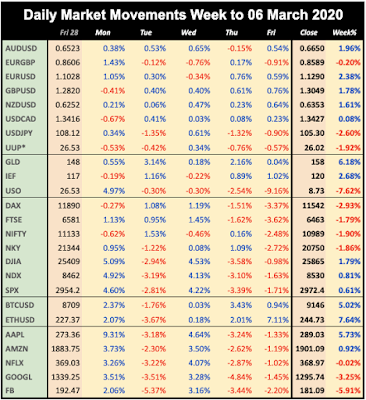 Monday March 9
COVID-19 remains the primary market driver, but if there is no news, and sentiment remains static, markets revert to technicals. North America enters daylight savings time this week, whereas Europe does not for another three weeks. Hence for Europeans US markets open one hour earlier. For US traders Europe opens one hour later. Markets are closed in India.

Tuesday March 10
Six more states pick their Democrat candidate today, the most important being Michigan (125 delegates) where Biden and Sanders are currently polling neck-and-neck. The Chinese February CPI is the most important print today, as the epidemic started in January.

Wednesday March 11
Today is the UK budget under new Chancellor (Finance Minister) Sunak, and stimulus is expected, especially in the light of COVID-19. The February US CPI does not cover the period of the virus emerging in Europe and the US, and so is unlikely to move markets much.

Thursday March 12
The German Bund yield, like its US counterpart is at record lows, but the ECB, already at a minus 0.5% deposit rate and 0% main rate has less room to maneuver, as shown in this FT chart. The single currency is up over 5% in two weeks, and at an eight-month high. Risk is surely to the downside. Note the Fed rate decision scheduled for today has been postponed until the 18 March (where a further 50bp cut is priced in).

Friday March 13
The Michigan CSI print is dated ‘March preliminary’ and is therefore a good indicator of what the US public think about coronavirus, and the Democratic race for that matter. Otherwise we are reliant on news during the week.