In a week where sentiment changed yet again, primarily driven by the Fed on Wednesday afternoon, which precipitated a sharp fall in equities and reversal in the dollar and yield slide. However signs of a possible second wave in Texas and California, and the consequent fear that this will slow the ending of restrictions and thus economic recovery. Notably haven assets (Gold, JPY and bonds) had been rising all week, and actually stalled on Thursday, when SPX fell over 6%. Notably NDX managed new all-time highs until the pullback. Technicals also come into play, as indices move into overbought territory.
Next week, we have two days of Fed Chair Powell giving his semi-annual ‘Humphrey-Hawkins’ testimony to Congress. You can sure the extent of COVID-19 economic damage will be the primary topic, and traders will be looking for any variation of last Wednesday’s message. There are rate decisions in the UK, Switzerland, and Japan, which all come with central bank messages.

In a busy data week, we also have a lot of inflation data : CPI for UK, Eurozone, German and Canada, PPI (wholesale price inflation) for the UK and Germany, and Retail Sales for the US, UK, Canada and Canada, and jobs reports from Australia and the UK. All are expected to be bad, but crucially, not as bad as last month. A second wave of declining data would be as damaging as that of the virus itself. 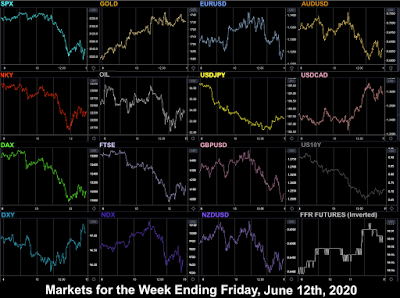 Mon Jun 8
Last week’s re-opening’ rally continued today, with SPX turning positive for the year, and NDX making a new all-time high. Travel stocks were the leaders. The dollar continued to fall, and in a sign that this rally is uncertain, the haven trio were also up and Oil was down.
Tuesday June 9
The pattern of this recovery has seen certain stocks gain at the expense of others, and the move today was tech stocks, so much so that DJIA was down 1.09%, but NDX was up 0.66% (breaking the 10000 barrier briefly). SPX was in between, down 0.78%. Once again, the haven trio all said ‘risk off’ and rose, and Oil was roughly flat. Another down day for USD (after a brief rally in Europe’s morning). The move was not universal, with GBP sliding, and the antipodean duo down over 1%.

Wednesday June 10
The Fed rate decision and dot plot today indicated no hikes until the end of 2022, and reiterated the damage to the economy caused by COVID-19. Maybe it was the latter warning, or even the CPI miss earlier, or maybe it was a case of buy the rumor, sell the news. Stocks turned down, although once again we had tech divergence (DJIA down 1.04%, NDX up 1.28%, another ATH).

A similar reversal was seen in USD, although there was not enough time for it to erase earlier losses and DXY posted a red candle for the day. This is not uncommon, as London (the world’s forex centre) is closed by the time of the Fed meeting. Most of the losses were against JPY which was up once again, along with bonds and Gold. Oil was flat on the day.

Thursday June 11
Today was the worst day in the markets since March, with DJIA down nearly 7% (NDX down 6%) as Texas and California reported new spikes in COVID-19 cases, inevitably linked to the reopening, and implying the crisis will take longer to resolve than originally thought. Travel shares in particular fell hard. Oil was also sharply down, losing 7.28%. The Initial Jobless Claims figure was a beat, but only very slightly, and there were still 1.5M new claims.

The dollar reversal continued with DXY strongly up again all currencies except of course JPY which along with bonds, was up for fourth day. Gold however took a breather and pulled back slightly.

Friday June 12
Markets recovered slightly after Thursday’s sell-off, although not by much, as most stocks had inside days, suggesting there was no immediate follow-through to Thursday, although this was still the worst week since March. Oil was slightly up, and the neutral mood saw JPY and bonds down on the day, and Gold rise again. The dollar recovery continued, with sharp moves up (except on CAD), some of this being driven by EUR and GBP concerns as Brexit deal deadlock seems to be back on the agenda, and not helped the worst British industrial production (-20.3% MoM) figures in decades.

WEEKLY PRICE MOVEMENT
The sharp fall on Thursday pushed all markets into negative territory this week, with last week’s top performer (DAX) being the week’s worst casualty, down nearly 7%. AUDJPY was the weakest pair this week, down 3.48%. Cryptos once again hardly moved, and FANG (and indeed NDX) did notably better than the market as a whole.

I knew AUDNZD wouldn’t move much, and so it proved to be the case. My trade paid off, but only by 0.55%, for 9 out of 19 weeks win, and accumulated profit of 7.65%. Not much, but I am tying one hand behind my back with forced entry and exit times. I am tempted to short AUDJPY for some more, but this depends on SPX continuing downwards, so I’ll sell AUDCAD instead. 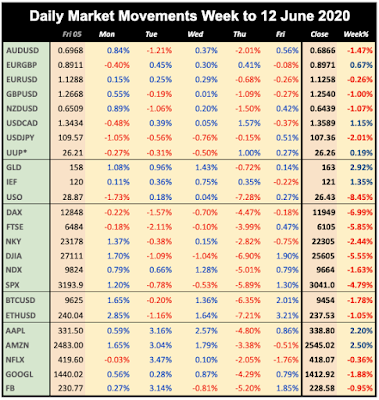 Monday June 15
A quiet start to the week, with no significant European or US data. Markets are closed in Argentina and Colombia.

Tuesday June 16
Today is the first day of Fed Chair Powell’s Semiannual Monetary Policy Report to the Congress
before the Committee on Banking, Housing, and Urban Affairs of the U.S. Senate, the first in June since 2016. As well as Japan, there are rate decisions in Poland and Colombia. There is a 10-year UK bond auction. Markets are closed in South Africa.

Wednesday June 17
Today Fed Chair Powell continues his Humphrey-Hawkins testimony to the Committee on Financial Services, U.S. House of Representatives. There is a 30-year German bond auction. Markets are closed in Iceland.

Thursday June 18
Once again, the key weekly Jobless Claims figure is expected to fall, although still five times its long-term average. As well as the UK, there are also rate decisions in Taiwan, Norway and Indonesia.

Friday June 19
Today is June Option Expiration date, which often leads to heightened volatility especially in markets which have trended all month (and therefore options have not been closed early). There is a rate decision in Russia. Markets are closed in Sweden and Finland.