News of the Fed's corporate bond buying programme, a surprise strong beat on Retail Sales, and positive results on COVID-19 drug dexamethasone gave a strong push for equity and Oil markets early in the week, but these gains stalled and faded on news of a small resurgence in cases in China, and some spikes in hospitalisation in states which have re-opened, and a slight miss ('only' 208k) in the Initial Jobless Claims figure. This accelerated on Friday on news that Apple will close some US stores only just re-opened. Noticeably Gold also spiked on Friday, after positively correlating with equities until then.

After stumbling initially, the dollar had a relatively good week, recovering smoothly after weeks of fading, unlike yields which tracked equities, and faded after Fed Chair Powell's Humphrey-Hawkins testimony.

The net result for the week was a SPX +1.86%, Gold +0.78%, and DXY +0.59%, which by recent standards was fairly flat, reflecting the opposing sentiments of some genuine economic activity overshadowed by the fear of a second wave, which, given the almost complete recovery of some markets, cannot be said to be priced in.

Next week has little scheduled news other than European PMIs, and given that Chair Powell has said his piece, and the Initial Jobs figure is becoming less volatile, risk attitude in markets (with the consequential effects on other asset classes) are vulnerable to second wave/resurgence data. The continuing strength of Gold is an indicator of the disconnect between the damage and equity pricing, which will not resolve itself until the next batch of earnings reports in about three or four weeks time. 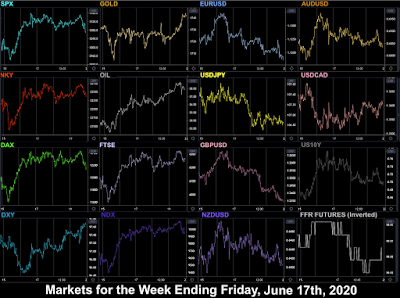 Mon Jun 15
On Monday, last week’s end-of-week slump was reversed on new that the Fed would start buying individual corporate bonds on the secondary market, with tech and financials leading. Oil was up in line. The dollar, however, which had rallied on Friday, slumped on the news. The haven trio (Gold, JPY and bonds) were all down in line

Tue Jun 16
The rally continued today, on trial results showing that a steroid, dexamethasone (off-patent) helped critically ill COVID-19 patients. It faltered slightly on new that Beijing had re-closed schools after a new outbreak. (This then became the theme for the rest of the week) Again Oil was up and the haven trio down, but otherwise USD recovered yesterday’s losses after a stellar beat (17.7% vs 8%) on Retail Sales. There was little reaction to Chair Powell’s Humphrey-Hawkins testimony as he didn’t really say anything we have not heard before.

Wednesday June 17
The mood changed today as Beijing cancelled several domestic flights, and a resurgence was seen in the US with Arizona and Texas reporting spikes in new cases. It is unfortunate for Chair Powell that these things often happen after major speeches, where the market seems to pout, if no new gifts are brought to the table, even if last ones were only days ago. The slip was not large, only 0.4% on SPX, and outperforming NDX actually advanced, on half the usual volume, but notably Gold and bonds were up, Oil was down, and the yen was the only currency that rose faster than the dollar.

Thursday June 18
Today’s indices were roughly flat, (SPX+0.06%) a rare occurrence these days on a slight miss on Initial Jobless Claims (1508k vs 1300k), as traders took a hands-off approach. European indices were more decisively down. Volumes in SPY were again half the usual level. Intermarket assets were indecisive—in line you might say—as Oil and bonds were up, Gold slipped slightly, as did JPY, but less so that other currencies.

The dollar was up firmly, helped by a 1% fall in GBP after the Bank of England rate meeting. Curiously, Gov Bailey announced a reduction in the pace of bond buying (QE) although the level was confirmed at an extra £100 billion, on top of the £645 billion static and in place since 2008.

Friday June 19
The indecision was resolved today to the downside, after morning gains were erased and markets faded in the afternoon after Apple (ironically after an all-time high) announced it would close some recently re-opened stores, along with further daily case increases from CA, FL, AZ and SC. All markets except NDX (flat) and FTSE (up on further GBP weakness) posted red candles.

USD was up again, except against JPY which was up along with Gold and Bonds. Although Oil dipped on the Apple news, it managed to recover and end up on the day.

WEEKLY PRICE MOVEMENT
The strongest index this week was NDX, reflecting investors long-term love affair with tech beating the negative sentiment. In a quieter week for forex, GBPJPY was the biggest mover down 1.99%. Cryptos hardly moved for a second week, but FANGs notably outperformed.

With little movement this week, my AUDCAD short worked, but only by 0.31%. It might work again, but it looks like stocks may be turning down now some second wave activity seems likely, and so JPY should be strong. The currency that has most recently topped is AUD, so this week I will sell AUDJPY. Results are 7.96% over 20 weeks, of which half were wins. 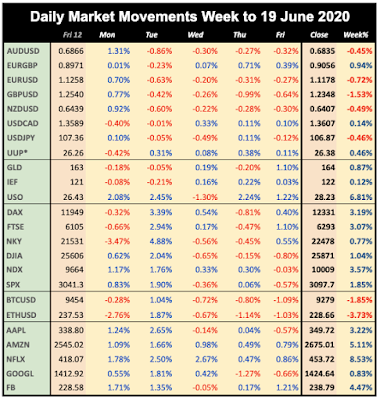 Monday June 22
Today we get to hear for the first time from the new BoC governor, Richard Tiffany “Tiff” Macklem, who took over from Stephen Poloz on June 3. He was previously the Senior Deputy Governor, although he left the bank six years ago for an academic post. Markets are closed today in Latvia and Croatia.

Tuesday June 23
All June PMIs today, which whilst well under 50, are all expected to improve. Any failure to do so would be bearish for markets. There is a rate decision in Hungary. Markets are closed in Latvia and Estonia.

Wednesday June 24
Irishman Philip Lane is the first three ECB members to speak this week, as the central bank’s speaking programme resumes. As well as New Zealand, there are rate decisions in Thailand and Czechia. Markets are closed in all three Baltic republics.

Thursday June 25
Today is the big date of the week for data with the now in focus Initial Jobless Claims, as well as the Capital Goods and latest GDP print. There are rate decisions in Turkey and Mexico. Markets are closed in China and Hong Kong today and tomorrow for the Dragon Boat festival. 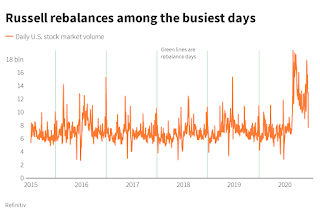 Friday June 26
Today is the ‘Russell Recon’ the once a year rebalancing of the 2,000 stocks in the index. Every year shows huge volume and volatility on this day, as you can see on this chart from Refinitv.

There is little scheduled news today.