Labor day short week, US Correction continues with risk-off trading, GBP down on Brexit
MY CALL THIS WEEK : SELL EURGBP

In a week where negative news (COVID relief, jobs print) was not balanced by anything positive, it was no surprise to see a risk-off second week of retreat in equities, and reversal back up in Gold. The dollar continued to recover from its two-year low last week, and would have probably gone further were it not for a strong showing from EUR after a hawkish ECB press conference.

Next week is the Fed rate decision meeting, which invariably moves both the dollar and markets. Also of heightened interest is the BoE decision, coming during a renewed interest by the markets in Brexit, as the Dec 31 deadline to do a deal approaches with little progress in sight. 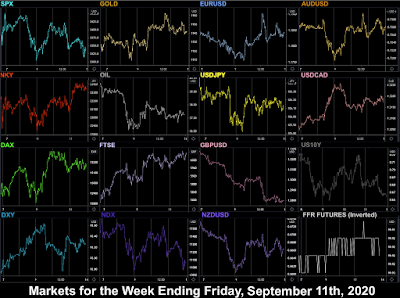 Markets were closed in the US for Labor Day, but European markets rose, mainly in defensives. The dollar was up across the board, but the notable move was GBP, down sharply on fears than PM Johnson plans to override part of the existing agreement.

Gold fell slightly, and Oil was flat. The US bond market was closed.

Last week’s rout continued today with sharp falls across the board, but particularly in tech stocks. TSLA plunged 21% its worst day ever, and FANG stocks underperformed NDX overall. Oil fell over 6% in line. This was a reaction to tech overvaluations, rather than any specific news, and was probably triggered by TSLA. USD was firmly up, except, as you would expect, against JPY, which along with Gold and Bonds were up. All assets in line for a classic risk-off day.

There was a rebound today from yesterday’s drop and all indices were up. Notably tech and industrial stocks recovered in about equal proportions, typically 2/3 of the Tuesday drop. Oil and yields were up in line. The dollar was down, dipping as EUR bounced off August support lines, and Gold rose on the weaker dollar.

A disappointing Initial Jobless Claims figure, and a blockage by the Dems of the latest COVD recovery package put a damper on the market, which fell again today. Once again, tech fell further. The ECB left everything unchanged, and did not express any concern about appreciation, which was consider hawkish, and EUR shot up, but then faded. Together with a further decline in GBP, this left USD up for the day. Oil was down, and Bonds and JPY were up, both in line with equities, and Gold was down in line with the stronger dollar. An interesting comparison to Tuesday, a similar equity move, but an opposite direction for USD.

The week ended quietly, with SPX flat, DJI slightly up, and NDX down. Similarly the dollar was flat today with little volatility, as was Gold, and Oil. Bonds were slightly up. The week closed with notable divergence, with US indices down, but foreign (particularly FTSE) up.

Unusually we had an index over 4% down (NDX) and one over 4% up (FTSE) this week, the latter due to the large fall in GBP, which was reflected in the largest forex move, EURGBP up 3.85%. Cryptos went back to sleep, and FANGs underperformed NDX, particularly AAPL down 7.41%.

I played safe buying AUDNZD, and safety only gets you small rewards, up 0.80% (7.12% running today 16 wins out of 31). I am backing reversion this week, selling EURGBP, which is overbought on the daily chart for the first time since March. 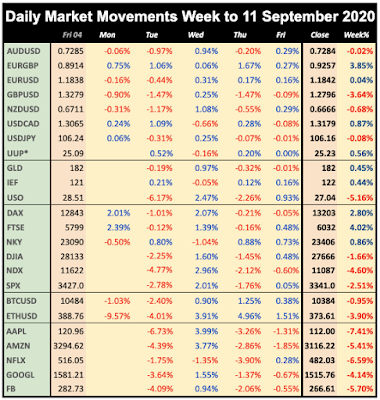 There is a vote scheduled today on Boris Johnson's new 'internal market' bill which is at odds with the current agreement on Northern Ireland. EU leaders have said that if this passes, it will make a deal impossible. Otherwise, there is very little in scheduled news today.

News from China and Europe, but nothing important from the US today. There is a rate decision in Poland.

The Fed rate decision today has a hold 100% priced, and it is unlikely that the current QE plan or dot plot will change. However, markets are always look for more. There is also a rate decision in Brazil. Markets are closed in Mexico.

The Bank of England leads today, especially as Brexit rears its head again. There are also a rate decisions in South Africa and Indonesia.

The main US release is the Michigan Consumer Sentiment Indicator. There is a rate decision in Russia. Markets are closed in Chile.