Fed seen as not dovish enough, DXY inside week, Equities, Gold and bonds consolidate
MY CALL THIS WEEK: BUY EURCAD

This week, the Fed’s statement confirmed what would in normal times be seen as dovish, confirmation of the new averaging of inflation and no rate increases until 2023, or inflation is “on-track to moderately exceed 2% for some time.” However, there was no new easing hints at, and thus the report was considered slightly hawkish, or at least, as we have seen recently ‘not as dovish as expected’.

Early equity gains on vaccine hopes were capped to produce a lambda-shaped (inverted V) week, with a slight risk-off bias, seen in tech underperformance (vs DJI), and a rising yen. The dollar had a short-lived spike up immediately after Fed, primarily against the euro, but DXY posted its first inside week since early August, and Gold and Bonds continued in low-volatility consolidation. Ignoring EUR, the dollar was slightly up.

Next week is light on scheduled macro news, with little other than PMIs, and will probably be dominated y the preponderance of CB speakers, topped of course by Fed Chair Powell’s marathon three-day testimony to Congress on the Coronavirus Act, where traders will looking for amplification of detail on the current Fed position. Also of note is TreasSec Mnuchin’s testimony. The week also sees a huge tranche of corporate bond issues, taking advantage of rock-bottom rates. 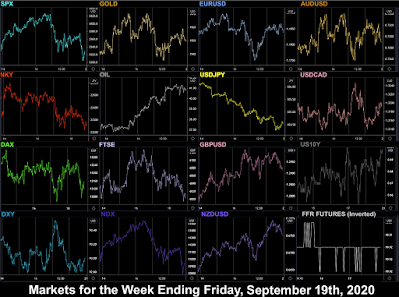 Markets rose today, reversing Friday’s fall, on news that Oxford University and AZ were recommencing vaccine trials, and PFE said a vaccine by year-end was likely. European indices were flat after currency gains. The dollar fell again across the board. Gold was up on the weaker dollar, whereas bonds and JPY fell in line with market, the yen being the largest mover in the DXY basket. Oil was more or less flat.

Strong economic data in the morning from both China and Europe produced a risk-on day, with NDX and SPX outperforming a flat DJIA. Oil was up in line, and Gold and bonds were down. The dollar was more of less flat overall, with a weak euro contrasting strength elsewhere. JPY continued upwards, against the haven trend.

After fading pre-market, US stocks attempted a small rally, but fell again after the Fed statement was seen as ‘not dovish enough’. The Fed upgraded their long-term economic forecast and said that there would be no rate hikes until inflation reaches 2% under the new averaging rules. The dollar spiked up on the news and ended up against all currencies except EUR (which meant DXY was slightly down). Gold was up in line with the equity pullback. Bonds were flat. Oil rose after the strong EIA stock beat.

Equity markets were disappointed with the Fed’s failure to offer anything new, and fell again today, not helped by the continuing Congress deadlock on the next COVID relief bill. The brief ‘hawkish’ dollar rise faded fully today as well. The move was strong (all currencies were up), and completely overshadowed a three-hour 0.86% dip in GBP after the Bank of England mentioned that they had been studying negative rates. Oil was up in line. Gold was down slightly, and bonds were flat.

Equity markets and Oil fell again today following the trend since the Fed, and Gold and JPY were up in line, the latter only 0.14% up but this was otherwise on a stronger dollar day, particularly against GBP and CAD. Yields were slightly up on the stronger dollar. 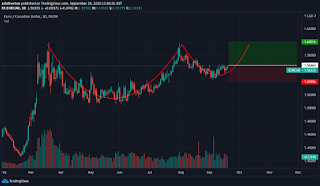 WEEKLY PRICE MOVEMENT
Largely a consolidating week when the strongest index move (NDX) is only 1.36% down, although notably FANG considerably underperformed the index, with most of the giants down 5%. Only a slight move in crypto, and the largest forex mover, also slight was CADJPY down 1.69%. 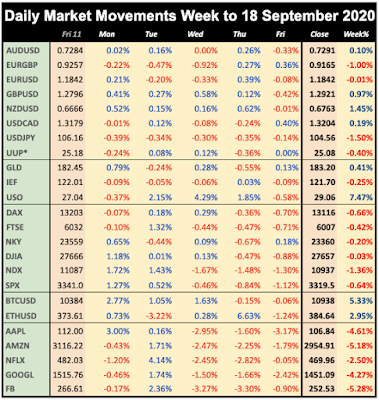 A new weeks opens, with only six weeks to go to the election which will be increasingly important. Fed Gov Brainard speaks on the Community Reinvestment Act in Washington.

Fed Chair Powell begins the first of three days testimony to the House on the Coronavirus Aid, Relief, and Economic Security Act. TreasSec Mnuchin appears with him. BoE Governor Bailey speaks to the British Chambers of Commerce.

Fed Chair Powell testifies for the second day to the House, and we have a rash of PMIs (all three categories) today. The most important ones are highlighted.

Today Fed Chair Powell testifies to the Senate on the Coronavirus Act, again with Mnuchin alongside him. BoE Gov Bailey speaks again to the Chamber of Commerce.

The only significant US macro prints today with the dual Durable Goods and inelegantly named Non-Defence Capital Goods ex Aircraft. Fed Williams gives the ninth Fed speech of the week.