Blog reader @unluckyruss (a apt name for an AIM investor!) has asked me to do a chart on Asiamet Resources. I am happy to oblige. I have never looked at this before, and am a bit out of my comfort zone with AIM miners.

Asiamet (LON:ARS) (www.asiametresources.com) is an Indonesian copper and gold miner, listed, like many miners on both AIM and the junior Canadian market TSX-V. Indonesia is not a significant political risk. Their price has not moved much in the last year. As you can see from their website, they have not yet actually yielded any metal, so their price is not affected by the substantial moves in the spot price of gold (XAUUSD, GC_F) and copper (XCUUSD, HG_F) this year, both of which are down about 10% since February 2015, as per the charts below 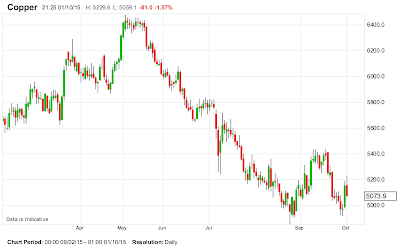 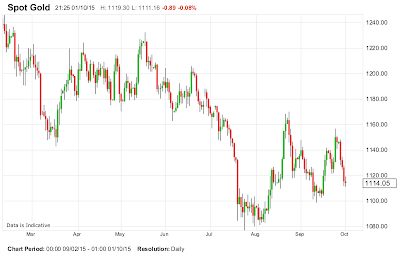 Those two charts are interesting, because you could argue that copper slightly 'behind' gold which hit it's low a month earlier, and say that copper is now where gold was mid-September. This gives an indicator that copper will rise (and fall, but with higher lows). Also copper is traditionally strongly correlated with the Australian dollar, and many FX commentators believe the AUDUSD pair has bottomed after declining all year.

The company is, as I say, still exploring, so they have not yet made a profit, or indeed booked any revenue. Hence conventional fundamental metrics are of little use. However, they still have over $1.3M of cash to operate with due to this market placing.  However their operating expenses are $800k per 6 months (see http://www.asiametresources.com/i/pdf/2015-Q2.pdf page 20). If cash runs out, there presumably be a rights issues which will dilute existing shareholders.

So let's look at the share price. Currently at 1.55p, it is more or less midway in a channel of 1.00p to 1.90p which has held all year. Remember there is no revenue, so as is usually the case with junior miners, everything depends on whether they actually extract any metals before their cash runs out. If they do, then, as always happens, the shares will soar, presumably above the 7p IPO price, even with a rights issue.

Rather than go into the likelihood of that, I will direct you at a much more authoritative blog post on the subject here.

The author holds a position which I do not. You can take today's price of copper and quickly calculate the potential upside.

However, @unluckyruss has asked me for a chart, which is the short-term view. Here is the daily chart for the AIM instrument for the last 12 months or so. 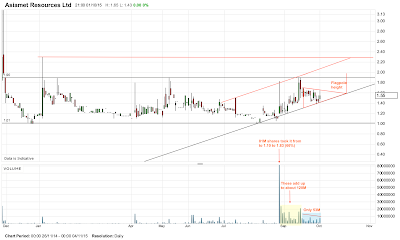 After falling sharply from around 7p, the share has travelled in a channel all year, spiking occasionally on news and perhaps rumour, with volume never exceeding 10M shares a day. On August 26th 2015, the company announced a high-grade copper zone discovery (http://www.asiametresources.com/s/PressReleases.asp) and the shares spikes as high as 66% above the previous day's close (1.83p vs 1.10p). But that's what it was, a spike. The shares closed the next day at 1.22p. The smart money had got out, leaving the amateur investor buying at the top. There were 81M shares transacted that day, nearly 10 times normal volume.

Over the next couple of weeks, there was some recovery, and importantly, the price made higher lows. A further press release on this discovery on September 14th caused another spike, this time to 1.90p a high previously achieved on one day only in January and May earlier that year. This is always a problem with AIM miners and explorers. They issue a positive piece of geological news, the price spikes for one day and then fades. An extreme example was when AIM bȇte noir David Lenigas appeared on BBC News one morning before market open to announce 'Gatwick Oil', the Horse Hill site. Shares in UKOG.L tripled in value at the open, but within the hour it was all over, and they were more or less back to where they started.

Price movement in low liquidity markets is can only be driven by volume. If you look at the chart, you can see that all the volume up to the second press release was only one-and-a-half times the volume of the August 26th trading day. The volume was still greatly in excess of the pre-August 26th average daily volume, and so the price rose gently. The September 14th release didn't have anything like the earlier volume, but on the other hand the existing volume had pushed the price up. (In other words, investors had already got in early, for once). The spike this time, from 1.40 to 1.90 was only 35%, but this time, the price held better in subsequent days.

We now come to a third press release on the same subject, issued on September 29th. I am not a geologist, so I don't know the significance of the release contents, but I imagine there is nothing new in it, because it really had no effect on the price at all. You can also see the volume falling. The total shares traded since the September 14th announcement is 53M, and falling. Some people are now getting out, but the majority are regarding this as momentum which it is. Nevertheless the falling volume is accompanied with a slight fall in price.

The price is now forming a bullish ascending triangle, the ascending line being the hypotenuse, and the adjacent line being the 1.90p 'high of year' price. Technical theory suggests that the price will rise to the adjacent line and then break out above it. The share is currently 1.50p/1.60p and if it reaches 1.90p, will be presumably offered at 1.85p/1.95p. It is a strong possibility that the price will reach there again. This offers a low-risk gain of 0.25p per share.

There are some technical signs which are better still. The last spike before the August release allows us to draw a parallel ascending channel which takes the price smoothly above 1.90p. There was a spike in January to 2.20p, and this is a possibility. I must stress though that 1.90p has been touched twice more recently, and so is definitely resistance.

What this means in practice is that a lot of professional investors will have noticed these two highs, and have limit orders to sell already set up at 1.90p (or 1.85p because of the bid/offer).

The slight fall in price is not too worrying, as the red line shown for the last few days on the chart is the start of a symmetrical bullish pennant, as indicated on the chart. In fact a pennant gives a clue to a potential rise. The theory is that upon resolution of the pennant, the price will rise by the entry 'height' (called the flagpole) of about 0.4p. The pennant resolves at 1.60p, giving a final price of 2.00p. However flagpole height gains are easily trumped by strong resistance, and I would just regard it as another signal to reach 1.90p. In fact because this technical indicator is not strong, if the price does rise to 2.00p, I would stay in until 2.2p - without further news.

Will it break out above 1.90p. In my opinion no, unless there is even better news than that given in the last three releases. The market knows the BKM mine is good. The next step is to say something even better, and for that matter address the cash burn issues.

The technical momentum is good for 1.90p, but in mining, no news is bad news, and the volume and thus the price will start to decay again. If I were Asiamet, I would time my next news release to be out in early November, which is where the ascending line touches the 1.90p resistance! If no such news arrives by then, you can expect a slow decay in the price, back to 1.00p.

Of course the next release may well be a rights issue, which will change everything.

By the way, the director buy on September 1st was slightly helpful, but at £45,000, it was not really very important.

Finally, if you want the full technical signals in one easy page, these can be found at

Many people don't realise that investing.com (in my opinion the most useful site in the whole business), isn't just for FX and the big indices, but does cover many UK micro-cap stocks. Here's their summary at the time of writing, and it's a strong buy on all timeframes. 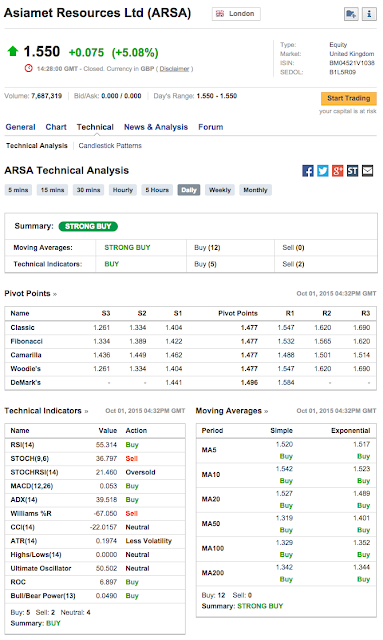