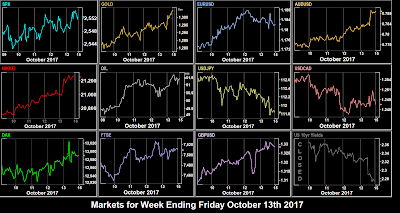 On Monday the Spanish IBEX35 gapped up as Catalan worries receded. As we predicted last week, the markets were very quiet because of Columbus Day. SPX was slightly down (2 handles) and DAX and NKY were near-flat, the latter market being closed. FTSE gave up ground to rising GBP as the poor performance Conservative Party conference faded in traders’ minds. NDX managed to eke out an intraday all-time high, after gapping up, but ended the day down. The Chinese markets opened after a week, gapping up to a 21-month high. USD was generally flat against most currencies, only GBP showing any gain, and Gold and Oil advanced a little. The only interesting price/action of the day was USDTRY which rose 4.5% after a threat from the US to refuse all visas to Turkish citizens. US bond markets were closed.

On Tuesday we were expecting two events, a North Korea missile which didn’t happen, and a Catalan declaration of independence, which did, but was immediately ’suspended’ by separatist President Puigdemont. The Spanish IBEX fell again, but this concern was not reflecting in Spanish 10-year bonds, or EUR, which was healthily up on the day. SPX made an intraday all-time high, as did NDX, and DJIA made another ATH close. NKY hit a 10-year high, and FTSE rose strongly (despite GBP strength) after a strong beat on Manufacturing Production, yet a miss on the UK Trade Balance. Only DAX was flat, despite the Trade Balance beat at 0600, probably reflecting Euro strength. USD had its worst day in a month, with DXY down 0.4%, all other currencies were up, as was Gold. Oil also surged 2.7% on reports of further Saudi cuts. Bond yields dipped with USD, ending the day 2bp down at 2.34%.

Wednesday was another strong day for equities. SPX, DJIA and NDX all closed at all-time highs again, and DAX and NKY followed suit. FTSE pulled back slightly, and then started to recover but finished the day slightly down. The FOMC minutes, although outlining a ‘dot-plot’ of further rises, showed concern that inflation was not picking up. (September’s inflation print was 1.9%, but core PCE on Sep 29 was a miss at 1.3%, the inflation target is 2%). As we envisaged last week, USD fell, particularly against CAD, and to a lesser extended elsewhere, and despite an initial dip, to stay flat against JPY by the close. Bond prices (inverse to yields) and Gold were similarly up. Oil held on to the previous day’s gains, but did not advance any further. The API stock print (after the pit closes) was a day late due to Columbus Day, and came in as a miss at 3.09M (prev -4.08M).

US equities took a breather on Thursday, but not before DJIA and NDX made another intraday ATH. Along with SPX they all closed slightly down. The euro broke its four-day winning streak which helped DAX beat the trend, at one point breaking 13000 for the first time, and closing up. The FTSE All World index made its third ATH in as many days. The UK FTSE 100 also made a record cash closing high at 7556, after a large spike which entirely reflected GBP, which was the main story of the day.

Sterling had been fading since the European open, and then spiked down an instant 45 pips (0.33%) at 0943 after EU chief Brexit negotiator Michel Barnier said talks were “at deadlock”. However, this drop was fully recovered an hour later only for the fade to start again. However at exactly 1230, it then spiked up an immediate 47 pips to carry on rising during the US session. This is the normal time for main US economic releases, and many traders, including ourselves will have searched fruitlessly for some US data miss. There was none, the only releases at that time were beats on PPI and weekly jobless claims. It seems the recovery was based on positive remarks in the German Handelsblatt newspaper. Despite all this volatility, GBP actually posted an inside week.

In other currencies, the DXY picture was deceptive. The basket rose 0.16% on the day, but this was entirely due to EUR coming off again, and to a small extend CAD which faded slightly as Oil unwound some of Tuesday’s gains, despite the EIA stock beat at 1500 (also a day later than usual). But Gold, JPY and AUD were up, and yields were down, as the FOMC inflation concerns continued to weigh.

On Friday, the Fed’s concerns about inflation were strengthened. The CPI figure came in at 1230 as a miss (2.2% vs 2.3%) and the Core CPI at 1.7% (set 1.8%). Retail Sales MoM also missed, although the annual figure was as per estimate. DXY immediately fell 49 cents (0.53%), and USD fell on the day against all currencies except EUR. Gold was up, posting the first weekly green candle for five weeks, and bond yields fell sharply. As the day continued, USDCAD to end the day flat.

Equities continued to blow out, with SPX, DJIA, NDX and DAX all making intraday and closing ATHs again, and NKY hitting a 20-year high. FTSE also rose but couldn’t quite match the previous day. Oil posted a slight gain. The summary of the week was a consistent rise in equities, and a consistent fall in USD, a pattern we have seen many times this year.

These are the prices movements for the week on the instruments we cover. The dollar was down across the board, and best forex trade of the week would have been long AUDUSD at 2.06%. The strongest index movement was the NKY up 2.41%, surprising as USDJPY was down. The largest overall movement was once again Oil, erasing last week’s losses to finish 4.56% up.

Over the weekend the IMF meet in Washington and there will be speeches from Yellen, Carney and Kurd, amongst others. Also elections are being held in Austria, with eyes on the far-right FPO vote. They are new and neck for second place. Also New Zealand may announce the final coalition for the next government. The right-wing NZ First party is kingmaker here.

Following on the heels of the IMF on Monday is a G30 meeting, also in Washington. Again Janet Yellen and BoJ Governor Kuroda speaks, along with PBoC Governor Zhou, and ECB member Constancio. The US House of Representative goes into recess, whilst the Senate returns. News releases include New Zealand CPI, the first of many this week, although no surprises are expected.

Wednesday sees the minutes of the extraordinary EU Economic Summit, and the UK unemployment report. Traders may look beyond the headline figure for any indication of wage growth, the sticking point for rate increases. In China, the 19th Annual Communist Party Congress begins.

Thursday brings the Australian jobs report. The estimate this month is 10k, well below the 54.2k last month. A beat is likely, but whether this helps AUD, given the previous clear RBA statement of not following the rest of the world, remains to be seen. Also important in the Asian session is China GDP. In Europe, focus is once again on the UK, with Retail Sales at 0830.

Friday sees BoJ Kuroda speaking, but the focus of the day will be on Canada as inflation and retail sales are issued simultaneously as they were in the US last Friday. CPI is expected to increase from 0.1% to 0.3% and as we have seen in the past, CAD volatility usually follows. Janet Yellen speaks at the National Economists Club, but this is after the markets closed. The weekend sees elections in the Czech Republic.