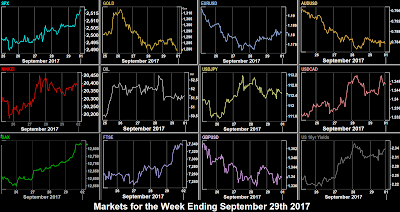 Monday saw a reaction to Angela Merkel being re-elected in Germany with a reduced share of the vote, and emergence for the first time of the far-right AfD party in the Bundestag. Aided by the IFO Sentiment miss at 0800, DAX fell and so did EUR, SPX and NKY also dipped but recovered somewhat in the US session. Notably the Spanish IBEX was down 0.9% on worries about the forthcoming Catalunya election. In currencies NZD joined EUR in reacting to the unclear NZ election result, falling 1%.. In any event, USD was up in general against most currencies. The exceptions were JPY and Gold, which were up as you would expect in risk-off sentiment, fuelled by further North Korea sable-rattling. 10-year T-Bill yields were down. The exception to the trend was oil, which was sharply up by nearly 4% after Turkey threatened to shut down the pipeline from Kurdish territories.

Tuesday saw DAX and NKY recover Monday’s losses, the latter largely responding to yen weakness, as “missile fatigue” once again set in. SPX was flat on the day and FTSE faded slightly. The IBEX fell again, and it was Turnaround Tuesday for Gold which gave up Monday’s gains. As Fed Chair Yellen hawkishly cautioned against waiting too long to raise rates again, USD continued it’ advance against all currencies except CAD which also turned around Monday’s losses despite Oil being flat. Yields rose accordingly.

Wednesday saw Trump confirm his tax reform plans. The details had already been released, but nevertheless all indices resume their upward path, particularly NKY as JPY extended its losses. USDJPY hit a 2-month high,  Gold continued to fall to close at $1,281, the lowest level for a month, and SPX made another intraday all-time high. The dollar was up against all other currencies after the tax plans and Tuesday’s Yellen statement, and yields followed. The strongest move was against CAD, which fell 128 pips (1.04%) as Governor Poloz said that there was ‘no predetermined path for for interest rates’ in Canada, and the BoC will proceed ‘cautiously’ on rate hikes. The RBNZ rate decision (1.75% hold) had little effect, and did the WTI stock beat, as oil remained flat.

On Thursday FTSE was fairly flat, but DAX rose very gently all day after the German Gfk Confidence miss (0600) was followed by the various Eurozone Sentiment/Confidence beats (0900). SPX also hardly moved, but after the GDP beat (3.1% vs 3.0%) at 1230, it did manage to close at a new ATH of 2510. NKY on the other hand faded almost tick for tick with USDJPY decline. The story was different for USD, which gave up some of the gains earlier in the week. It was down against all currencies, as were yields, and Gold was up, as the market digested the Trump tax plans and wondered whether they would get through Congress. Oil had a volatile day, up 1.62% at one point, but finishing the day 0.85% down.

As the week, month and quarter drew to a close, equities rallied hard on Friday, with SPX at another all time high, and the other indices closed at highs of the day. EUR was also up again, back to where it was on Tuesday, despite the Eurozone inflation miss. However, other currencies fell against the dollar and despite EUR, DXY finished the month with its first green monthly candle since February. A surprise news item was that Trump had met former Fed Governor Kevin Warsh as a possible replacement for Chair Yellen. Warsh was on the Fed during the 2008 crisis, and is considered to be more hawkish than Yellen. Bond yields moved up sharply on the announcement, putting on 4.3bp in an hour, the same kind of move we saw at last week’s FOMC. Gold gave up Thursday’s gains, and Oil was flat on the day.

These are the prices movements for the week on the instruments we cover. The best forex trade of the week would have been short AUDUSD at 1.72%. The strongest index movement was again NIFTY at 1.74% as it continues to unwind gains earlier in the year.

Over the weekend we have the controversial Catalan independence election on Sunday. As we said in our subscriber email this week, the markets are not really taking much account of this, although a yes vote now seems very likely — although Madrid will ignore it. The British Conservative (government) party conference starts in Manchester, UK and runs until Wednesday. Surprises are unlikely on the first day.

The Chinese (including Hong Kong) markets are closed all week for the National Day Golden Week. South Korea’s KOSPI also closed all week for the Chuseok (Harvest Festival). Note this is celebrated in Pyongyang as well, possibly indicating a pause in the war of words. The pause gives a good indication of Chinese trading activity, by its absence, for example, will Bitcoin volatility reduce? It is also of course NFP week.

Monday sees the start of a new week, month and quarter. NIFTY is closed due to the Mahatma Gandhi Jayanti holiday. The day sees Markit Manufacturing PMIs for most countries we cover, but the more significant one is from the US Institute for Supply Management at 1400.

Tuesday’s Asian session sees the RBA rate decision. No large volatility is expected. Traders will be looking for further reference to whether Australia takes account of the global hawkish trend to tightening, or not. The DAX is closed for German Unity Day, so the European open is unlikely to be volatile, especially as there is little news. Of course EUR, which is traded mainly from London, not Frankfurt will still be active and may react to the PPI print at 1000.

Wednesday is another light day, with less important Markit Services PMIs following Monday’s manufacturing figures. PMIs are a survey of production levels, new orders, inventories and so on, and are much more meaningful for businesses which supply goods rather than services. Note that PMI surveys do not include prices (inflation), nor do they include sentiment. These factors are reported in separate releases.

The main news of the day (short of Janet Yellen saying something new) is the ADP jobs report, which as you know, is an indicator for NFP on Friday. This month’s estimate is far lower than last month, although considerably higher at 135k than the NFP estimate of 98k.

Thursday’s main release is the ECB MPC accounts (i.e. minutes) with a raft of ECB speakers on the day, Praet at 0915, Liikanen and Jazbec at 0930 and Coeure at 1315. Look out for talk about the strength of EUR, any concerns about this can only push it down. The central bank theme continues with Powell, Williams, Harker and George all speaking during the US day. Both the US and Canada report Trade Balances at the same time, a possibly volatility spot for USDCAD. As an aside, markets are closed in Portugal.

Following on from that US/Canada theme, Friday is of course double NFP day, when both sides of the 49th parallel report at the same time. The US estimate is unambitious, being only two-thirds of last month, as is Canada’s at 15k (22k prev). Again, if one country beats and the other one missed, USDCAD volatility will resume. The reason for the lower US figure is the hurricanes, which of course have not touched Canada. CAD upside is therefore a distinct possibility.

There is a three-day weekend for Japan as Mon Oct 9th is Taiiku no hi, the health-sports holiday. Also in the US Monday 9th is Columbus Day, where the bond (but not stock) markets are closed.