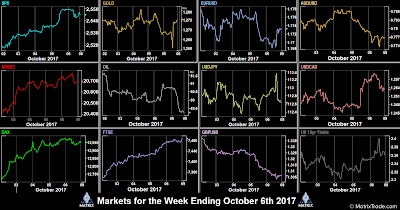 On Monday, as predicted, the Catalans voted for independence, and unsurprisingly EUR lost ground, as did the Spanish IBEX. Details emerged of more US tax cuts, and there was speculation that hawkish Kevin Warsh would be appointed to replace Fed Chair Janet Yellen. Also the important ISM Manufacturing PMI print was a beat. On the back of all this SPX, DAX, FTSE and NKY were all up, continuing the trend from last week and USD also rose against all other currencies. SPX, DJIA, and NDX all made new all-time highs. Gold was down as expected, but 10-year yields were however only 1bp up. Oil had a bad day, continuing its retreat from the previous week, and gave up 2% on the day.

The momentum continued on Tuesday, which saw another record high for SPX, and DAX, FTSE, and NKY followed suit, the latter being particularly strong. The RBA rate decision at 0330 had little effect on AUD, and in general USD did a ’Turnaround Tuesday’ retreating to give up Monday’s gains against most currencies, Gold and bond values (inverse to yields) also gave up their Monday losses. The exception was GBP, which did not recover, on the UK PMI construction miss, concerns about UK PM  May’s leadership and continuing Brexit worries. Oil continued to lose ground.

The bull run continued on Wednesday, albeit at a slower pace. Nevertheless the DAX made a new all-time high, the first since Jun 21st. SPX also made its third record high of the week. FTSE was also up, and NKY was more or less flat after its strong run on Tuesday. The ADP jobs report, a precursor to NFP on Friday came in slightly ahead on estimates (135k vs 125k), but the estimate had been reduced, it was given as 135k last weekend as you may have seen in our report. Note that the effect of the recent hurricanes has made the figure less important this month.The Spanish IBEX fell heavily, losing 2.56% on the day on Catalonia concerns. USD was mixed, after Markit (1345) and ISM (1400) Services PMI beats, but concerns about the Fed Chair position, now another candidate Jerome Powell (slight dove, similar to Yellen) has emerged. EUR, AUD and GBP were flat, JPY was down (after a brief spike up) and bond yields were up, yet gold was also up. Oil faded slightly, after a brief spike up following the WTI EIA beat at 1430.

Another day, another all-time high. On Thursday SPX, DJIA, NDX, RUT and even the Wilshire 5000 micro-cap index all hit all-time highs, as did DAX, despite the fade in EUR. Also posting all-time highs were the stock markets in Norway, Belgium, The Netherlands and Denmark. Even the Spanish market recovered the previous day’s losses. Analysts pointed to the progress in US tax reform as the main driver, although Trade Balance and Jobless Claim beats at 1230 also helped. In currencies, USD was also sharply up against all currencies, following hawkish remarks from Fed members Harker and Williams. Both supported another rate rise this year (ie on either Nov 1st or Dec 13th, CME FedWatch predicts the latter). Only JPY held its own, as it had already been rising during the Asian and European sessions. Yields of course were also up, although only 2bp, and Gold was down. Oil had a good day, recovering the previous two day’s losses.

The exuberant mood changed on Friday for two reasons. There was talk of North Korea preparing to conduct another missile test (see our Next Week analysis below) and the NFP report was negative for the first time in seven years (-33k vs +90k est). SPX broke its seven day rising streak and fell on the day, as did DAX and NKY, although FTSE was slightly up on GBP weakness following political uncertainty after the lacklustre Conservative party conference, and disquiet about PM May’s leadership. Otherwise USD was weak, and fell against other currencies. The Canadian jobs report also missed estimate (10k vs 14.5k est) but this was less shocking, and CAD appreciated, ie USDCAD duly fell. The reaction from Gold and JPY was particularly interesting. These initially fell sharply on the jobs print, but then quickly (although not instantly) recovered to end the day up. Bond yields similarly spiked, but faded to end the day only slightly up. Oil fell sharply to end the week below the psychological $50 mark as fears of hurricane production cuts receded.

These are the prices movements for the week on the instruments we cover. The best forex trade of the week would have been short GBPUSD at 2.47%. The strongest index movement was (therefore) the FTSE up 2.03%, but the largest overall movement was Oil down 4.78%

There was Twitter chatter going into the weekend that North Korea might attempt another missile launch soon, and the Catalan situation in Spain is still unresolved. The New Zealand electoral commission declares the official result of the Sep 23 election. Coalition talks can now start. Similarly, the German CDU/CSU party hold strategy talks to determine their preferred coalition.

Monday sees the Chinese (and Korean) markets open after a week’s holiday. It is Columbus Day in the US, but unlike the bond markets, the US stock market is open. However, activity is expected be greatly reduced, and in the absence of any US data releases, a quiet day is expected. Also the Japanese and Canadian markets are closed for Health-Sports Day and Canadian Thanksgiving respectively.

Tuesday is the anniversary of the founding of the North Korea Bureau of the Communist Party in 1945, and as such, the chances of a missile launch on this day are higher. As we have seen before, no launch could result on a relief rally. Also the Catalan parliament are planning to make a unilateral declaration of independence. FOMC dove Kashkari speaks as the US session opens. There are quite a few releases, but nothing particularly important.

Wednesday is the big day this week, with the FOMC minutes. The next rate decision is in November and the CME FedWatch tool is suggesting a 98.5% chance of a hold. Rhetoric has been hawkish recently, and a failure by Chair Yellen to continue this line could cause USD to falter. Fed Dallas President Robert Kaplan is of course speaking earlier (5pm PDT Tuesday in the US), and he is viewed to be slightly dovish, on the same page as Yellen. We will be publishing our non-rate decision fractals for subscribers.

Thursday is packed with low-level data, but the key event of the day is a panel discussion in Washington when ECB President Draghi and Fed dove Lael Brainard both speak at a panel in Washington. The headlines are published at 1415, when the US and European sessions are both open. Markets are closed today in Israel and Brazil.

Friday is the second big day, where we see US Retail Sales, followed an hour later by US inflation. The  2% Fed’s [tightening] target figure has not been hit since May. This month’s estimate predicts we return upwards. A beat would surely strengthen the beleaguered US dollar. After the prints, we see various speeches by Fed members as the day goes on.