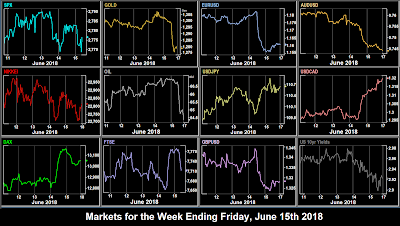 Monday June 11
Despite the acrimonious fallout from the G7 meeting, there were positive comments from Italy’s new finance minister, and equities advanced on Monday, with SPX making a three-month closing high. The dollar was virtually flat, as was Gold. DXY added 0.09%, mainly because of a 0.5% drop in CAD (9.1% of the basket) after Trump’s remarks were specifically directed at Canadian PM Trudeau. Oil put on 0.4% towards the end after a largely flat day. US 10-year bond yields were flat.

Tuesday Jun 12
The much vaunted Trump-Kim meeting turned out to be a damp squib, with nothing of note, either good or bad being reported. Equities were mixed but volatility was light. The US was slightly up, after the partial US CPI beat (core print as expected, raw—including food and energy—beat) with SPX adding 0.2%, and notably the Nasdaq Composite ($COMPQ, not the Tech 100) hit an intraday ATH. However the other equity markets did a Turnaround Tuesday and generally gave up the previous day’s gains, probably because the dollar was up (slightly) across the board. Gold and Oil were down in line, and yields had another flat day.

Wednesday June 13
The Fed raised rates to 2% as widely predicted, and indicated two further rises this year, one more than predicted, and the effect was seen in SPX which (a) once again followed the weekly average pattern we mentioned last week, ie turn at the end of Wednesdays and (b) the normal negative reaction of equities to a rate hike. The US benchmark fell by 0.61% from its 15:00 high. NKY, which had put on 100 points during the Asian session gave up all that. FTSE and DAX were less affected and ended the day fairly flat.

The hawkish Fed comments did not affect currencies as you would think, although JPY was down. However, DXY was down overall 0.3% on the day, after a strong showing from EUR. CAD and Gold were also up, and AUD and GBP were flat. However bond yields were up 2bp and the curve narrowed, with the two-year yield up 3bp. The rate hike was priced in, so maybe traders were now waiting to see what the ECB did the next day. Oil rose 1.1% on the day after a beat on the EIA stock print at 14:30. 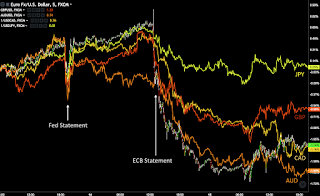 Thursday June 14
The US rate hike was priced in, but the hawkish dot-plot was not. The ECB confirmed the asset purchase taper in December, as predicted by BuBa President Weidmann last week. This was also priced in. What was not priced in was a signal that any Euro rate hike would not come before Summer 2019. As you might expect EUR promptly fell hard (2.42% by the next morning, the worst 24 hours since the Brexit vote), but as you can see from this chart, after a muted response on Wednesday, all the other currencies fell sharply (JPY less so) after the ECB announcement at 11:45 (not the press conference at 12:30). These falls therefore must be a delayed reaction to the Fed, rather than solely linked to the ECB.

The SPX recovered some of the Fed-inspired decline putting on 0.31%, and NKY was up after losing 100 points in the Asian session, but the real story was in Europe where DAX added 2.2% and FTSE 1.1% as a direct reaction to their respective currency fades.

DXY had its best day for virtually two years (since Brexit vote day, when GBP dropped 8%), adding 1.47%. Despite this, Gold was up $4—the reaction came later, and equally surprisingly bond yields fell 4bp, with the US10Y-US02Y gap closing by 3bp to a new 10-year low. Oil continued Wednesday’s rally to hit a high for the week, briefly nudging above $67. The jobs miss at 01:30 in Australia may have contributed to the AUD decline, which as you can see, started earlier than the others.

Friday June 15
Fresh concerns about the US-China trade war surfaced on Friday, and indices gave up some of Thursday’s gains. It was also Opex day. All indices were down. Currencies were mixed. After the large moves the previous day, EUR and GBP recovered some ground, the latter after a stellar Retail Sales beat (4.4% vs 2.5% est), whereas risk-on commodity currencies CAD and AUD continued to fall, (the former to a 2018 and near 12-month low), a pattern we have seen in previous weeks. JPY, which has been a little detached from the others recently, stayed flat after the BoJ rate hold. Gold had a delayed reaction to the USD rally, and gave up 1.72% to make a new 2018 low. Oil also fell sharply, losing over 4% on a mixture of the strong dollar and concerns that Saudi Arabia and Russia were planning to increase output at the OPEC meeting next week. 10-Year yields were down 2bp, as were the 2-year notes.

The net result of the various rate decisions was a strong week for USD, with DXY putting on 1.34%, and all currencies down. The biggest loser was CAD, down 2.14%. The fall in the euro meant DAX was the winner in indices. Crypto-currencies crashed again, heading towards new 2018 lows.

Monday June 18
The week opens with the ECB’s Sintra conference (in Sintra, Portugal), where President Draghi will make the opening remarks. This is Europe’s equivalent to the US Jackson Hole conference. Fed member William Dudley (centrist, voter) makes his final speech and retires, to be replaced by existing FOMC member John Williams (hawkish, voter). Chinese markets are closed for the Dragon Boat (Tuen Ng in Hong Kong) festival. There is little news.

Tuesday June 19
Sintra continues with a further speech from Draghi. Fed Bullard (dove, non-voter) is also speaking at the conference. Away from Sintra, ECB Hakkarainen is on in Frankfurt at 10:15. Again, not much economic news. Tech heavyweight ORCL reports after the bell.

Wednesday June 20
The final day at Sintra has ECB President Draghi, RBA Governor Lowe and Fed Chair Powell all on together at 13:30, preceded by ECB Lautenschläger (hawkish, voter) and Coeuré (hawkish, voter). Elsewhere ECB Villeroy (centrist, non-voter) speaks at 07:30, as does BuBa President Weidmann (hawk, voter) at 09:45, both in Paris. The 7th OPEC two-day international seminar opens in Vienna, and traders will particularly be watching for remarks from the ‘Global Oil Market Balance Metrics’ session which starts at 12:30. In Japan, the current session of the Diet closes today.

Thursday June 21
After the raft of speeches earlier in the week, focus turns to the BoE and the GBP rate decision. A hold is expected, but last week’s data was mixed. The important core CPI was as expected, with a miss on the food/energy inclusive figure, yet there was a blowout beat on CPI proxy Retail Sales. Nevertheless the miss, and reversal on Average Earnings will probably service to kick the decision down the road. Watch for the voting figures, the consensus is 7-2. There are also rate decisions today in Switzerland (07:30) and Norway (09:00). The OPEC conference continues for a second day.

Friday June 22
The OPEC seminar is followed by the 174th Ordinary OPEC meeting, where output changes will be decided. This may be more important than the conference. Otherwise the main event of the day is Canadian Retail Sales and GDP. CAD broke to a near 12-month low last week with the Fed rate hike, NAFTA concerns, the Trump/Trudeau spat, and the receding price of Oil. Something positive in these prints could make a big difference.