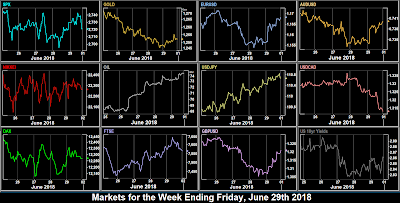 Monday June 25
Over the weekend came more hawkish Trump trade rhetoric, limiting Chinese investment in US companies. Markets duly fell hard, with SPX giving up 1.31%, its worst day for two months, and cancelling all the gains for the month. In line, the VIX hit a two-month high. Other indices followed suit, DAX not being helped by the mixed IFO sentiment reports at 08:00. In currencies, DXY pulled back from the HOY reached last week, to close 0.2% down. GBP, EUR and JPY, the main components were up, but CAD was slightly down in line with drop in Oil prices, and AUD was notably down 0.34%. The result of the Turkish election  (Erdogan re-elected) produced a standout 3% gain in TRY, although this all evaporated by the end of the day. Gold did not follow either the risk aversion or USD trend and was down $3. It started a decline which lasted all week, following a technical trend to Dec 12 low. US 10-year Treasury Bond yields were flat.

Tuesday June 26
A slight Turnaround Tuesday today, but not much, with only really tech and energy performing, the latter boosted by a 3.61% jump in the WTI price, which spiked after we got a ‘white swan’, as the US State Department ordered buyers to cut Iranian imports. SPX added 0.2%, and NKY was also up, helped by a weaker yen. The inter market importance of oil was shown by contrasting the oil-free DAX (flat) with the oil proxy FTSE (up 0.84%, much more than SPX). All this was before a significant shift in the API Oil Stock print at 20:30, improving to -9.29M from -3.02M (lower is better).

EUR had a full turnaround, giving up Monday’s gains, and all other currencies were down slightly, giving DXY a healthy 0.5% gain on the day. Gold was down to a new 2018 low, and yields had a second flat day.

Tuesday was also was a bittersweet day in the history of GE. On Nov 7, 1907, the doughty US conglomerate replaced the Tennessee Coal, Iron and Railroad company to join the DJIA, where it remained for 111 years, the last company from that era to do so, and the longest member of any US index by far. GE was also a member of the original Dow 12 index calculated by Charles Dow himself in 1896. In 2000, it was the largest company in the world by market capitalisation. Today, after falling 60% in the last two years to a weight of less than 0.5% of the index, the stock was ejected in favour of pharmacy chain WBA. Sic transit gloria mundi? Perhaps not. This came on the same day that the company announced divestment of its Baker Hughes oil division, and the shares rose 8%, the best one-day performance for three years.

Wednesday June 27
A mixed picture, for once, on indices as an early rally in US and Japanese stocks on a potential softening of Trump’s China trade position faded and both ended in the red. As always, sentiment in currency tends to last longer and DXY was sharply up 0.62% again by the end of the day, the corollary of which is that the weakened EUR and GBP delivered a green candle for both DAX and FTSE.

The rest of the currency profile was risk-off as AUD (substantially) and CAD (slightly) also fell, yet JPY was flat. CAD was helped by a further Oil advance after the substantial EIA beat (-9.89M vs -2.57M est) at 14:30, in line with the API print, and the sharpest weekly decline since September 2016. Gold, increasingly unreliable as a risk-off indicator fell for the third day, another 2018 low. Also counter-intuitive were yields, which fell 5bp, rather a lot for a weakly risk-off day and not in line with the stronger dollar. Oil continued the ‘Iran’ rally, adding another 2.34% to a new three-and-a-half year closing high.

Thursday June 28
Despite the US GDP partial miss (on the annualised figure) at 12:30, equities staged a recovery rally on Thursday, SPX putting on 0.58% to recover the previous day’s losses. DJIA new entrant WBA got off to a bad start, dropping 10% on news that AMZN are entering their market. NKY and FTSE were also up, the latter being help by the continuing Oil rally (up 1.32%) which also saw CAD add 92 pips (0.69%). DAX, as ever does not participate in Oil rallies, and was down again. Indeed, the automotive sector (20% of DAX) are ultimately consumers not producers of Oil. Coupled with Chancellor Merkel’s political problems, and potential car sanctions, this was proving to be the weakest index for a second week.

EUR and AUD were fairly flat, and GBP lost ground to a new seven month low, on worries about that the EU was stepping up unilateral plans for Brexit, resulting in a nearly-flat (up 0.04%) DXY, which nevertheless still hit a new 2018 record. Gold and JPY were down, and yields up in line with a return to risk-on. The US10Y-US02Y spread narrowed to 0.32%, the lowest in a decade.

Friday June 29
Equities were mixed today. All rallied then faded, with SPX closing flat, NKY and FTSE down, and DAX actually showing a slight upturn after the European Council immigration deal (referred to last week). The early rally in the SPX was probably helped by the PCE (CPI proxy) YoY beat at 12:30, coming as it did after the QoQ miss the day before.

The immigration deal gave a strong boost to EUR, it was up 90 pips in the Asian session, and finished the day 114 pips up. Coupled with strong gains elsewhere, including CAD after the GDP beat at 12:30, and GBP after an upward revision in Q1 GDP, DXY had its worst day since January, shedding 0.88%. Even NZD and Gold turned up after falling all week. Counterintuitively again, yields were slightly up. Oil continued its rally, up another 1.3% today, and 16% up in the last two weeks to close at $74.26, a 19-month high. The 61.8% fib from the 2014 high is less the $3 away.

A mixed week for USD, up against some and down against others. The weakest currency for a second week was NZD, and the best trade would have been to sell it against CAD, making 3.00%. Also for the second week, DAX was the worst performing index, and Oil was the biggest mover. For the first time, the two major cryptos moved in opposite directions, but again with little volatility.

Monday Jul 02
The weekend saw two tariff changes. Canada introduced their retaliatory tariffs on steel, and conversely, China reduced their import tariffs on cars and auto parts. Also over the weekend is the Mexican Presidential election, where left-winger AMLO is widely expected (20% ahead) to win, potentially a game changer for NAFTA. The UK Manufacturing PMI is important as GBP is as an 8-month low, and rate hikes are on a knife-edge. Markets are closed in Canada and Hong Kong due to local holidays.

Tuesday Jul 03
The key release today is the RBA Rate Decision. A hold of 1.5% is expected, so the market will be looking for something hawkish from Governor Lowe after AUD briefly dipped under, then bounced off a 13-month low last week. The currency is currently suffering from the intermarket effect of gold’s decline, and recent risk-off sentiment in global markets. It does not of course help that the 1.5% rate, once attractive for carry, now lags USD. In other news, there is a rate decision on SEK (4.2% of SXY), Turkish CPI at 07:00, and the NZ GDT milk auction, which we have found does have a consistent effect on NZD (which like AUD is at 13-month lows). US markets close early at 17:00 (ie 13:00 EDT) in advance of Independence Day.

Wednesday July 04
Today is Independence Day and all US markets are closed. Futures on US markets are electronically traded globally but close at 17:00 (VIX at 15:15). Volume, and therefore volatility is expected to be very low. The UK Services PMI is important for the reasons mentioned on Monday above. BoJ Harada (dove) speaks at 01:30.

Thursday July 05
Commentators are looking for an indication in the FOMC minutes of how close to ‘neutral’ (rates track GDP) the bank thinks rates are, as US growth forecasts are more positive than the inflation or earnings figures. Focusing on this metric would be seen as hawkish. Also today we have the ADP ‘sneak preview of NFP’ report, one day late because of the holiday. The estimate is only 10k apart from the NFP estimate. A surprise may move markets a day early. As well as BoE Governor Carney, CB speakers today include BoJ Masai (centrist) at 01:30, and ECB Mersch (hawkish) at 17:15.

Friday July 06
The big story on the first Friday of the month is always NFP, and this month, the Canadian and US figures are back in sync, meaning that USDCAD volatility is almost guaranteed. Today the first wave of 25% US ‘Section 301’ tariffs on Chinese goods is applied. China may say something about retaliation. Also there is a major UK cabinet meeting about Brexit transition.