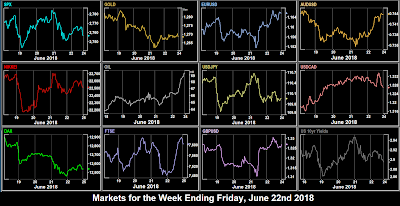 Monday June 18
All the equity markets we cover continued the slide from Friday, on trade war fears escalating over the weekend. DAX fell particularly heavily (284 points, 2.18% and a marubozu candle) on the German political problems relating to Chancellor Merkel’s increasing unpopular refugee policy, and the arrest of the CEO of Audi, part of Volkswagen, Germany’s biggest company. VOW shares actually outperformed the DAX, falling only 2.16%, but they had already fallen 3.55% on Friday.

The risk-off mood mean Gold and JPY were up, as was EUR after its heavy fall last week, and commodity (risk) currencies AUD and CAD were down, as was GBP, which, along with a rise in Oil, limited the FTSE selloff, which recovered from a 111 point drop to finish only 21 points down. US 10-year yields were down in line with the fall in DXY.

Tuesday June 19
On Monday evening, President Trump confirmed the market’s fears by announcing proposals to put $200Bn of further tariffs on Chinese goods. The total of $250Bn represents nearly half of all Chinese exports to the US. The reaction was strong in the Asian session with DJIA down 300 points and NKY down 550, and JPY up 85 pips. CNY touched a five month low. The markets recovered somewhat during the European and US sessions, but still all ended in the red. This was a good day for USD, despite the yen move DXY was up 28c (0.29%) to a new 2018 high as all the other currencies faded, with EUR touching a two-week low as at Sintra, ECB President Draghi reiterated that there would be no rate rises funtil September 2019. Gold and Oil were down in line with the stronger dollar, but the reaction was not seen in bonds as yields took the risk-off view (money rotated from equities into bonds) rather than tracking DXY, in contrast to Gold which tracked USD rather than acting as a safe haven. We know of course that for much of this year, Gold has acted as a commodity rather than a safe haven. Oil’s move also reflected concerns about the forthcoming OPEC meeting.

Wednesday June 20
Other than the DAX (down slightly by 20 points), markets recovered on Wednesday, but only slightly, as money rotated into tariff-insensitive tech stocks, with NDX hitting a new intraday ATH of 7310.  This was probably only a technical move, as there was no further trade war news. At Sintra, Fed Chair Powell reiterated the case for rate hikes, and there was an immediate reaction in yields, which closed up 4bp on the day. USD was also up, but only very slightly. Gold was down $4 in line to hit a six-month low as USD and equity risk status were pointing in the same direction. Oil staged a small recovery after the EIA beat at 14:30.

Thursday June 21
Traders had swallowed their fears on Wednesday, the last day of spring (in the Northern Hemisphere), but one swallow does not make a summer, and today saw the trade war inspired downward slide in equities continue. Again DAX suffered most, as President Trump threatened to increase German car tariffs (DAI, BMW, VW and CON are 20% of the DAX).

In forex the main story was the BoE rate decision. Although the 0.5% rate was held, the voting was 6-3 against 7-2 estimated, and importantly it was Chief Economist Andy Haldane who changed sides. GBP put on 0.91% after the announcement. EUR and AUD were also up, and although JPY and CAD were slightly down, this was enough, along with the Philly Fed Manufacturing print miss to bring DXY back from an early 2018 high of $95.53 to close 0.29% down on the day. Gold was flat on the day. Oil was up again, after hopes rose that cuts might stay in place at the OPEC meeting. Yields were down in line with DXY. NZD briefly hit a new 2018 low following the contraction of GDP from 2.9% to 2.7%, before recovering in the US session.

Friday June 22
The OPEC meeting closed with some increase in production output agreed, but not as much as the market had feared. The reaction in Oil was strong, with a green marubozu candle (don’t often get two in one week) up 5% on the day, and the intermarket effect was seen in oil proxies FTSE (up 114 points, 1.51%, recovering all the week’s losses) and CAD up 0.31% despite  a 107 pip (0.81%) spike down after the miss on CPI and Retail Sales at 12:30.

NKY was also strong, recovering all Thursday’s losses and more, but SPX and DAX only recovered about half the previous day’s drop, the latter reacting to automobile worries and strong EUR. The single currency had its best day this month, putting on 0.49% after the Eurozone PMIs beat at 08:00, but in any event USD was down across the board, slipping against all the majors and Gold, with DXY down 0.35%. NZD rallied 0.63% but still ended the week down. Yields were flat on the day. Notably Bitcoin made a new 2018 low, dipping briefly below the $6,000 roundpoint and previous Feb 6 (from 21:00 to 23:00).

The dollar was fairly flat this week, although there were some good intraday trades, such as USDCAD on Friday. The biggest movement for the week was NZDJPY down 1.03%. Index traders had the best result from shorting the DAX. Cryptos continued to fall although not as sharply as last week.

Monday June 25
A quiet start to a quiet week as we enter summer. There may be some fallout from the Turkish General Election on Sunday, although this will be limited to TRY. The focus is on whether incumbent President Erdogan can win 50% of the votes to avoid a second round.  No speakers today, but the German IFO sentiment prints are of heightened importance given the worries about the automobile industry and the political survival of Chancellor Merkel. There are no CB speakers today

Tuesday June 26
Tuesday is even quieter. Fed Speakers Kaplan (non-voter) and Bostic (voter) are both centrists, so given Chair Powell's clear position at Sintra, they are unlikely to say anything which moves markets. The only hope of volatility (save of course a Trump black swan), are the NZ trade figures which precede the rate decision on Wednesday (Thursday local).

Wednesday June 27
Three CB speeches today, with BoE Governor Carney speaking in London on the Financial Stability Report, and BoC Governor Poloz on transparency and trust at the Greater Victoria Chamber of Commerce in British Columbia. Also a rare appearance by Fed Rosengren (hawkish, non-voter) at 16:45. A hold at 1.75% is expected, but anything hawkish from the RBNZ could have a strong effect on the Kiwi.

Thursday June 28
Following the business sentiment print on Monday, we have the German consumer sentiment today, followed by the inflation figure at 12:00. German estimates are known to be accurate (many more print ‘as estimate’ than other countries), so no surprises as expected. GDP is less of a market mover than CPI and jobs, but any serious variation in the US print would nevertheless cause volatility. The two-day European Council meeting is likely to focus on immigration, although Brexit may also be covered, which would affect sterling. NKE (2.06% of DJIA) reports after the bell.

Friday June 29
The end of the week, quarter and half year should bring some volatility as investor rebalance their portfolios. The economic prints are less important as in both cases, the major releases have been front run. The PCE print is overshadowed by the quarterly print the day before, and Eurozone CPI comes after all the individual countries report.

Also, all eyes will be on the weekend which is unusually busy. Announcements on restrictions for Chinese investment is US tech are due on Saturday, ironically as pre-agreed (and priced in) Chinese import tariff cuts come into place the next day. Also on Sunday, staying with the trade war, Canada is due to announce retaliatory tariffs on $12.8Bn of US products. Note however, that this is less than 0.1% of US GDP. And finally, there is the Mexican general election is likely to return hard-left candidate Obrador. The focus will be on his party’s majority. Weekend gaps in MXN and CNY are a distinct possibility.