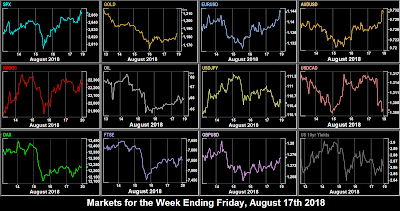 Monday August 13
Turkey continued to dominate market sentiment, as TRY gapped up 8% over the weekend, and breached 7.00 for the first time. ZAR briefly fell 10% during the Asian session, but started to recover during the day. Although SPX attempted a rally in early US trade, all indices ended the day negative. Although DXY briefly touched a new 2018 high, the dollar was flat overall (+0.07%), with a slightly weakened EUR being balanced by a slightly stronger GBP, CAD and JPY. Gold fell substantially, dropping $17 (1.4%) to its lowest level since Jan 17. Oil fell sharply (2.5%) in the early US session on demand fears, but fully recovered three hours later. Yields recovered slightly after Friday’s sharp drop.

Tuesday August 14
As TRY recovered 8% after its drastic falls, turnaround Tuesday again for indices which all rose, except FTSE which fell slightly as mining stocks sold off after the miss in Chinese Industrial Production at 02:00. The dollar had a much firmer day with DXY up 0.34%. All currencies faded against the greenback except CAD which put on 0.57%, its best day this month. Some of this can be explained by the risk-on sentiment, and an early rally in Oil. The risk on was not enough to help AUD, after Tuesday’s fall in Gold although the metal was actually flat today. Oil was also flat, and yields were up 2bp in line with the stronger dollar.

Wednesday August 15
The previous day’s rally was short-lived. Despite TRL recovering (we can hardly say rallying) another 7%, equities fell hard on Wednesday, the biggest daily drop since June, with SPX down over 0.8%. Traders started to think about contagion from Turkey (ie banks and sovereigns exposed to Turkish dollar debt), and of course the ongoing trade war issues, but the trigger may have been Tencent, the Chinese internet giant (part of BAT, the other two are Baidu [BIDU] and Alibaba [BABA]) who reported their first net profit decline in over a decade. BAT is the Chinese equivalent of FANG, and we know from previous weeks that despite beating estimates, any signs of slowdown in this sector have been punished harshly by the market. Shares in TCEHY opened 9.5% lower and were 6.7% down at the close. BABA had its worst day for over a year.

DXY had a similar day to Monday (+0.06%), more or less flat. Unusually, it was flat against EUR and GBP declined slightly. A larger move in JPY in line (up 0.39%) with the equity fade was matched by a 0.64% drop in CAD following the EIA Oil Stock miss at 14:30 and consequent 2.5% in Oil itself, a move we pointed out last week. CAD does tend to do this. If the price moves sharply, the next trigger for reversal tends to reverse 100% of the earlier move. Yields fell as risk-off money rotated into bonds. Gold continued to tumble, dropping another $20 to $1,173, a new low.

Thursday August 16
Overnight it was announced that the US and China were resuming trade talks. Although there were no firm details, this was enough to recover all yesterday’s losses and more. DJIA was up over 400 points at one point, and closed 323 up (1.28%) its best day since May 4, helped by 2.8% on BA (nearly 10% by weight), and WMT, up 9.3% beating estimates with its highest earnings for a decade.

USD had a less eventful day. The trend was down, but DXY was only off 0.1% with very small moves up in EUR and GBP (and AUD which is not part of DXY). CAD and JPY retreated, but by less than 0.15%. Gold had its first up day of the week, and yields were down, both in line with the weaker dollar, as was the slight advance in Oil.

Friday August 17
Monthly Opex day, and the US equity markets started with a dip but then rallied on Friday, although the effect was more muted in NDX, with only AAPL holding it up. This has been a trend all week. NDX closed down 0.57% for the week, but AAPL (12.32% of NDX) advanced 4.76%, ie without AAPL the tech index would have been down over 5%. Contrast this with a 1.35% gain for the week in DJIA. The effect of the thawing in the trade war is clear. European markets were flat, possibly as EUR and GBP advanced.

DXY had its worst day for nearly a month, fading 0.49%, with all currencies advancing, particularly CAD after a strong beat on inflation (3.0% vs 2.5%) at 12:30. We did not know the outcome, but given the beat, the move was predictable (see Wednesday). CAD put on 0.72% to almost exactly recover Wednesday’s loss. As yesterday, Gold and Oil were up and yields were down in line with the further dollar decline.

DXY hit a new 13-month high on Wednesday but pulled back to post its first negative week for a month. Only GBP fell against the dollar, and the strongest currency was NZD, after three bad weeks. Therefore shorting GBPNZD for 0.84% would have been the best forex trade. For the third week in a row, DAX was the weakest index. The surprise move was Gold, which had its worst week of 2018, at one point down over 4%. Nevertheless, as is so often the case, shorting Oil was the overall best trade of the week.

The weakness of ETH against BTC continued for a second week. It was the first week since March when the two leading cryptos moved in opposite directions, and ETHBTC made another 2018 low.

Monday August 20
This week is central bank dominated, and we start with three central banker speeches. Also Greece is due to exit its third bailout programme, after which it will be subject to ‘enhanced surveillance’ by the ECB. A week long session of public hearings on open on the USTR China tariffs, so expect news today or at any time in the week. Like last Monday, there are no economic releases of note.

Tuesday August 21
The RBA Minutes come shortly after Governor Lowe’s speech. It is difficult to know whether last week’s 19-month low is a bottom, but any hawkish statements could move the currency upwards, and avoid a further decline towards the long-term support level of 0.7150. Staying in that part of the world, the GDT milk index often provides volatility to NZD, which is languishing at a two-and-a-half year low. There is no important US news today.

Wednesday August 22
There is no rate decision today, but the FOMC minutes are important. These are from their meeting on Jul 31/Aug 1, the first since President Trump commented about preferring lower interest rates, and a lower dollar. Since those comments on Jul 19th, DXY has risen 1%, although some of this is because of European problems, ie USDJPY has fallen 2.1% in this period. The CME Fedwatch tool still predicts a 93.6% chance of a hike next month (Sep 26). Traders will be watching carefully for any language (or the dot-plot) indicating dovishness.

Thursday August 23
A busier calendar today with various PMIs and Japanese inflation. Although the Jackson Hole meeting starts today, the business proper will be on Friday and Saturday. This means the ECB Minutes are the main event of the day. The earnings season is now drawing to a close, but BABA, the last of the ‘BAT’ stocks (the Chinese equivalent of FANG) reports before the bell. We expect the pattern to be similar to the other stocks in this sector, a modest rise if all metrics are positive, a sharp fall if any are not. Also today, additional 25% tariffs on $16Bn of Chinese imports commences, as do the Chinese retaliatory measures.

Friday August 24
The annual Kansas Fed conference at Jackson Hole, Wyoming gets underway today. The calendar is not published until Thursday evening, so we are not able to pinpoint specific speech times. We only currently have BoC Governor Poloz speaking at 16:25 in a panel discussion on Saturday. We do however have a topic list which covers increased market concentrations in many industries, the price effect of online retailing, and the problem of low wage growth. With no other important news on the calendar, the conference will probably dominate market movements.