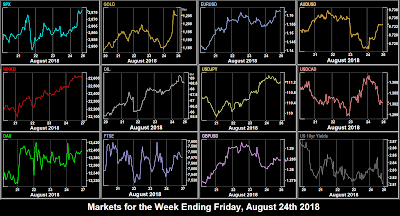 Monday August 20
Friday’s rally continued into Monday, as the Turkish lira stabilised, and markets were hopeful about the continuing China trade talks. All equity indices were up, with export-heavy DAX up 1%. Only NKY bucked the trend, fading slightly in the Asian cash session and failing to recover during the (futures) day, partly because of a stronger yen. The dollar continued downwards, with DXY giving up 0.42% on the day, and losing ground against all currencies, Gold and Oil, and US 10-year bond yields were down to in line, to their lowest level (2.82%) for a month, as the market looked forward to Wednesdays FOMC minutes and Jackson Hole, and bearing in mind President Trump saying he was “not thrilled” about interest rate rises.

Tuesday August 21
Lots of volatility today as SPX first shot up to touch an intraday all-time high of 2873.23, beating the January record. However, it then sharply reversed after news broke of Trump lawyer Michael Cohen implicating the president in  the hush money payoffs in the run up to the election. The key point is not the payments, it is the fact they may be regarded as undeclared and therefore illegal election expenses.

NKY, DAX and FTSE finished up in their cash sessions, but futures were then dragged back down by the late US selloff, and a strong showing from the European currencies. A clear case of technical resistance to the high. Subsidiary indices RUT and DJT also hit record intraday and closing highs.

The dollar retreated further, with DXY giving up 0.55%, its worst day for a month, as speculation on whether the FOMC minutes or Jackson Hole will reveal any reaction from the Fed to the Trump statements. The gains were in EUR and GBP. The picture was not even though, JPY was up, and CAD managed to keep pace with USD (ie USDCAD was flat). Gold was up in line with the weaker dollar, although Oil fell, despite an early rally. NZD was up against the ailing dollar despite the GDT miss at 14:24. It was however down against AUD. Yields recovered 2bp from their sharp fall on Monday, despite the dollar fade, but in line with early SPX rally.

Wednesday August 22
Few people remember the Jul 16-Oct 11 1990 20% ‘crash’ because, unlike Oct 19, 1987, it wasn’t instantaneous. At only 62 business days it was however quite fast, but from then on the market never lost 20% for 3,453 days, until its all-time high on Mar 24, 2000 (at which point it started a two and a half year decline losing half its value.) 20% is the benchmark for bear territory, and conversely a market which never dips this much is defined as a continuous bull market.

This means today was an important day statistically, as the record 3,453 period from the low of Mar 9, 2009 was equalled. SPX was up, although it didn’t touch the previous day’s intraday ATH. So were other indices.

The dollar fell for the sixth day in a row, and was little affected by the Fed minutes. Even CAD outperformed despite the Retail Sales miss at 12:30. However, the movement was not great (DXY -0.13%), and Gold and GBP were virtually flat. Oil was comfortably up after the EIA Stock beat at 14:30, and yields were down a further 2bp.

Thursday August 23
Today the US/China two-way tariffs came in to force. AUD fell sharply during the Asian session due to political uncertainty over the political leadership. But in any event, there was a sharp turnaround in USD, with DXY up 0.51%, probably as traders searched for evidence of Trump pressure in the Fed minutes and failed to find it. Notably JPY fell more than the other currencies, although all were down, as was Gold. Yields were flat on the day as was Oil.

Indices drifted slightly down on concerns about Cohen, and of course the lack of dovishness in the Fed minutes. The misses on forward looking housing and PMI data didn’t help. BABA beat estimates, but the stock still faded after an early rally. The earnings were foreshadowed by AABA reporting earlier. (AABA is Yahoo Japan plus Yahoo’s holdings in BABA. The other Yahoo business was sold to Verizon in 2006).

Friday August 24
Jay Powells speech on Friday at Jackson Hole was just what the markets wanted and just what the dollar didn’t. He defended the gradual interest rate rises, but did not see any risk of inflation overheating the economy. Crucially, it’s what he didn’t mention (the trade wars and presidential pressure) that marked the speech as dovish.

SPX and IXIC (the Nasdaq Composite, not NDX) made new closing highs, and all markets were up. DXY fell 0.49% in short order, and all currencies rose. Gold was up $20, its best day since May 2017, although this is also because it was so severely oversold last week. The yellow metal is still down 1.55% month to date. Oil and yields were flat on the day, although yields had risen before Powell spoke.

USD had its worst week since February, after Trump’s remarks about interest rates. However, the risk-on markets meant JPY fell further, and the biggest forex mover for the week was EURJPY. The risk barometer pair was up 2.52% as equities hit all-time highs again. Reversals came as DAX was the best performing index and Oil the best performing commodity after both being the worst last week. The crypto separation between Bitcoin and Ethereum continued, as ETHBTC fell by over 10% for the second week running.

From this week we have added the FAANG stocks to the price movement list. Four of them were nearly flat, but NFLX hugely outperformed after an upgrade from advisor Sun Trust.

Monday August 27
The main news today is the German sentiment indicators, which analysts expected to be broadly in line with last month. Without much other news, the continuing Trump/Cohen circus is expected to dominate news, along with a fuller assessment of Jackson Hole. The UK is closed for the late summer bank holiday.

Tuesday August 28
Again not much to report in advance. The S&P/Case Shiller Home Price indices estimate the same annual increase as last month (6.5%), whereas the government monthly figures last month missed (0.2% vs 0.3% est). ECB Praet speaks in Germany at 11:00.

Wednesday August 29
Today is the big day of the week with US GDP, which is estimated at 4%, a notch down from last month, but still very strong. The Fed have made clear that they are data driven, so this print, together with the PCE figure (a CPI proxy) may well have a strong effect on USD, and possibly equities as well. As always on Wednesdays keep an eye on the EIA stock print for Oil prices. BoJ Policy Board member Suzuki. speaks at 01:30

Thursday August 30
More PCE figures from the US today, although the effect is clearly muted with the QoQ release the day before. Nevertheless our comments about heightened Fed sensitivity (and therefore the dollar) apply. Two other inflation prints today, the real thing (CPI) from Germany and Japan (Tokyo only). Note as always that the German figure is important, the only reason it does not tend to move markets is that it usually comes in in line with estimates, ie it does not beat or miss.

Friday August 31
A NAFTA agreement in principle is expected today from Mexico. (Canada’s deadline is later). ECB de Guindos speaks at 17:00. Although we have German Retail Sales, this figure is blunted by the CPI release the day before. Similarly, the Eurozone CPI moves markets less than you would think, mainly because the constituent countries have already reported, and the estimate is usually accurate. The end of the month may produce some rebalancing volatility.