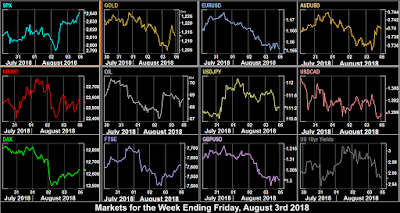 Monday July 30
The markets were still spooked on Monday by the momentous FB and TWTR crashes last week, and equity indices were generally down. Only FTSE, an oil proxy, posted a green candle after a 1.55% lift in the price of Oil. The dollar had a tough day, with DXY down 0.33% and all currencies gaining, except a flat JPY, which was unusual at the day saw JGBs (10-year Japanese Gilts) spike to an 18-month high of 0.113%. Gold was up in line with the weaker dollar, but US 10-year bond yields were actually up 1.6bp, and the yield curve (10-year yield minus 2-year yield) widened slightly.

Tuesday July 31
The final day of the month was a Turnaround Tuesday for equities and USD, led initially by the BoJ action to strengthen its QE framework by making its bond buying programme more flexible. The effects were seen in an unusually volatile Asian market which saw the JGB bond yield drop by over half from 0.113% to 0.048%. All indices were up on the day. NDX outperformed after falling nearly 4% from last week’s all-time high.

The forex picture was mixed. JPY was sharply down on the JGB action, as were EUR and GBP, which gave DXY a 0.23% gain. However, Gold, AUD and CAD were up, the latter despite a sharp fall in Oil, on speculation that Iranian exports could avoid sanctions. Yields were down 1bp. The AAPL beat on earnings added 4.5% to the price, a similar reaction to GOOGL last week

Wednesday August 1
The first day of the new month saw a pullback in US and European equities, starting in Asia, and continuing all day, on news that the US could more than double the planned tariffs on $200Bn of Chinese imports. Even the further advance of AAPL to close 5.9% up (and AAPL is 4.24% of SPX, 5.55% of DJIA and 11.99% of NDX) could not prevent indices from posting red candles. Even NDX itself was only flat. Oil fell again, in line, helped by the EIA Stock miss at 14:30. Oil prices are strongly linked to international trade, for obvious reasons. FTSE suffered the worst, because it is a oil proxy, and also because GBP bucked the currency trend and rose slightly in anticipation of Thursday’s BoE rate decision. NKY was slightly up, reacting to the previous day’s JPY move.

Otherwise USD was generally up again. A quick rule of thumb to see if it is USD or EUR that is the focus of traders is to glance at the EUR and AUD (an unrelated currency) charts. It is clear to see this week that USD has been the driver, the two charts are similar until mid-Thursday. Both were down, along with Gold. However, today, CAD joined JPY and GBP in beating USD, but the moves were small. Yields were up 3.9bp, followed the rising DXY, crossing the 3% line and making a three-month high into the Fed rate hold. There were however no notable moves after the release. 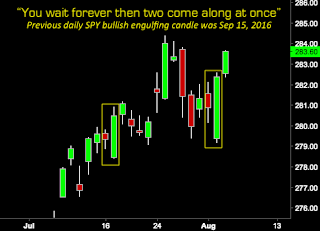 Readers will remember that last Wednesday July 25 was a day of two halves, and so it was again today. Asian and European markets (and US futures) fell in pre-US trading on the continuing trade war worries. Markets, as you might expect took hits roughly scaled to their exposure, with China coming off worst, Japan next, and then DAX and STOXX. The latter did not fare any worse than DAX, Germany may be the strongest EU economy, but it is the biggest exporter, and therefore most exposed.

However, the mood changed completely in the US session. SPX came off a futures low of 2789, a technical support area from July, and rose solidly all day adding 1.4% from the low. The cash-only SPY posted a bullish engulfing near-marubozu candle, the second in two weeks, a pattern not seen for nearly two years. The only news to support this was the moderate Jobless Claims beat at 12:30. The other indices recovered, but not sufficiently to go green.

DXY had its best day of the week up 0.57%. The biggest loser was GBP after the long-awaited rate hike to 0.75% which was accompanied by BoE Governor Carney, who said there would be no more rate hikes this year, and suggested a figure of 1.21% (only 0.46% more), later revised to 1.5% by 2021 (three years away). You can’t get much more dovish than that, and cable immediately fell 0.5%, and after a slight rebound finished the day 0.8% down. However, the was against a background of a further USD advance across the board. Gold was down in line. Oil sharply rebounded (up 2.1%) recovering Wednesday’s losses. Yield were down 2bp, back under 3%.

We had a US all-time record with the Facebook crash last week, and today there was another. AAPL continued its advance past $207.04, the point at which its market cap exceeded one trillion dollars, the first US company in history to do so. Exuberant journalists had little to say about PetroChina, who hit the magic figure on the day of their Shanghai IPO on Nov 5, 2007. The company’s market cap a year later was less than 26% of that figure, the largest single company destruction of shareholder wealth in history. Remember though, this AAPL price is far from a bubbler. AAPL trades at a PE of 18.8 compared to an SPX average PE of 23.7.

Friday August 3
On a day when China announces retaliatory tariffs on $60Bn of US good, the Non-farm payrolls misses by 20% (a surprise after the ADP and Jobless Claims beats), and rising markets most of the week, you would expect a profit-taking pullback on Friday. But that’s not what happened. After gently rising in early trade, markets rallied after the NFP miss (157k vs 195k estimate) with SPX adding 0.38%. We mentioned last week how the AHE figure is as, if not more, important than the jobs number, and this print (2.7%) was in line with estimates. The currently topical Trade Balance release also beat. Only NKY was down on the day, probably due to the market hours.

The currency position was mixed. A flat DXY masked a picture we have seen before. The underlying trend was a weaker dollar (JPY, CAD, AUD and Gold showed near-identical price action during the day), but GBP (following the BoE remarks) and EUR on another spike in Italian yields (and TRY concerns) followed an initial dip, but failed to rise after the NFP release, and ended up down for the day. Yields pulled back again in line with the dollar, and Oil faded slightly.

Forex showed a little bit more activity than last week, with a stronger USD upside (DXY added 0.52%). CAD gained for the third week in a row, and was the strongest performer. Selling GBPCAD would have netted 1.25%. The biggest index mover was DAX, which erased most of last week’s gains. After two weeks of rallying, cryptos fell back, once again ETH being weaker than BTC.

Monday August 06
As we move into Northern Hemisphere vacation time, Monday is complete absent of US news releases, and is expected to be a quiet day, playing out the results of last week’s FOMC and NFP. There is a GBP 30-year bond auction at some point in the European morning. Canada is closed for the August Civic holiday.

Tuesday August 07
With Australian inflation below the RBA 2-3% target, the RBA rate decision, or rather the statement accompanying it is unlikely to surprise, and continued ranging of AUD is expected. Volatile social media stock SNAP, still a loss maker (EPS est -0.31) reports after the bell, as does DIS. The earnings season is now drawing to a close with most majors having reported. Again, there is very little in the way of significant releases from Europe and North America.

Wednesday August 08
As with Australia, no surprises are expected from the RBNZ and the currency is expected to carry on ranging. Similarly RBA Governor Orr, speaking so soon after the Australian rate decision is unlikely to move the currency. Other than an unimportant Mortgage Applications print, we have another day of no US releases. Fed Barkin (hawkish, voter) speaks at 12:45.

Thursday August 09
Chinese inflation at 01:30 may set the tone for Asia. This is followed by the US PPI which is a forward indicator of inflation, and at the end of the day we have Japanese GDP. Today the USTR and Japan’s Economy Minister Motegi hold their first bilateral trade talks in Washington. Any positive news to come out of this (remember the EU in July) should help NKY and USDJPY. Singapore and South Africa are closed for holidays.

Friday August 10
Friday is the big day of the week for economic releases. A third airing of RBA views in the week is unlikely to matter, but as Europe opens, we should see some action. UK GDP at 08:30 is the first release since the rate hike last week, which did not lift GBP. A positive print here may do so, as cable is currently sitting at a support level. Even more important is the US inflation figure, one of the dual mandates of the Fed. Concurrent with this is the Canadian jobs report, one week later than the US this month. CAD has recently outperformed other currencies, and volatility is the norm on this release.