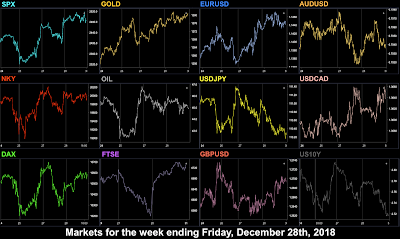 Mon Dec 24
Markets had been falling all the previous week, and today was another huge down, where significantly, the SPX having lost nearly 7% last week, fell a further 3.26%, and entered a bear market, defined as a 20% drop, for the first time since 2008. The high of Oct 3 was 2940.91 and so 20% below this is 2352.32. The market closed at its low of 2351. Other markets followed suit, but of course DAX and FTSE have been over 20% off the highs for some time. Sentiment was not helped by the government shutdown. The one market that didn’t plunge was FTSE, which closed at 1300, (before New York even opened) was actually up 0.52% on the day. Unlike DAX and NKY, FTSE futures also closed then.

DXY fell in line with equities, and was 0.35% down on the day. As you might expect JPY was sharply up, but so was GBP, which added 0.73% in two hours as at US opened. EUR, AUD and Gold were also up, but CAD was dragged down by Oil which fell 6.5% to a equal the 18-month low of June 2017. Yields were down 6bp in line with the dollar and the risk off mood.

Tuesday December 25
Christmas Day, and NKY futures had followed SPX down on Monday, and the cash market closed 5% down overall (ie from Monday’s Asian cash close). No other markets were open, but DXY futures moved down 0.12%

Wednesday December 26
Today was the start of the short Santa Rally, as defined in Jeffrey Hirsch’s Stock Market Almanac, and what a rally it was. After the S&P/Case-Shiller Home Prices beat at 14:00, DJIA rose by over 1,000 points, the first time ever in history. PX gapped up and closed at its high, 4.96% up to close at 2485, which is where it stood the previous Wednesday. DAX and NKY performed similarly, but FTSE (including futures) was closed. Although this may have been the ‘spirit of Christmas’, a more likely explanation is the 9.7% increase in the Oil price, as it bounced off the (Monday, and November 2016 and June 2017) triple low to add 9.71%, its best day since Feb 22, 2016.

The ‘Turnaround Wednesday’ (ie would have been Tuesday but for Christmas) extended to the dollar, with DXY adding 0.47%, and in an exact reversal, GBP, EUR, Gold and particularly JPY were sharply down, whereas CAD was up. Only AUD kept direction, and added for the day. Yields also reversed back up in line with the mood.

Thursday December 27
The over-enthusiasm was tempered on Thursday. After a mixed Jobless Claims report at 13:30, and no progress on the shutdown, SPX and other indices pared their gains, all pulling back, but still ahead of the Monday close, and then rallying sharply into the US close. This was timing, SPX ended green, but the foreign indices, being futures at that time didn’t quite hold all Wednesday’s gains. FTSE had closed before the US session even opened on Monday, and missed the Wednesday rally. It plunged over 2.6% to a new two-and-a-half year low, before recovering over half that loss in futures. the late US session. FTSE cash close 2% down on the day. There were, in hindsight, some arbitrage possibilities on this index as it tried to catch up.

The dollar turned back down, with DXY softening by 0.45%, but again the picture was mixed, JPY and Gold were up as equities turned down, the former giving up over half its gain into the equity closing rally. EUR was well up, but GBP, which had swung over 1 cent earlier in the week was relatively flat. As Oil retreated from its stellar one-day gain, CAD followed it down, and yields gave up most of their Wednesday spike, in line as on Monday. The correlations have been strong this week, the USDJPY and US10Y charts look very much like the one for SPX.

Friday December 28
After a wildly volatile week, Friday was much flatter. SPX and NKY were flat on the day, where the lagging (due to market time differences) European indices posted solid green candles. It is a sign of the current volatility that the relatively small moves on the charts were still 1.26% up for DAX, and 1.01% for FTSE, in normal markets, a big ramp. This was despite a notable miss in German CPI (1.7% vs 1.9% est) at 1300, which notably capped the rising EUR, which stopped rising at that point, unlike JPY, GBP and Gold which carried on rising all day. AUD and CAD had early rallies, but the EIA Stock miss at 1530 (two days late because of the holiday), and consequent fade in the Oil price sent the latter into reverse, to be the only currency weaker than the dollar this week. Yields were down again, to close the week at 2.718%, an 11-month low.

Please note all figures and percentages given for daily movement on indices cover the entire cash and futures period in that day. Currency moves are stated in relation to the US dollar. Dollar moves are referenced from the DXY basket.

After the disastrous crash into Christmas Eve, the market did produce a Santa Rally, and indices ended the week slightly up. DJI made its first ever 1,000 point up day on Dec 26. The US outperformed other countries, but this may have been because they had more closed days. We are of course still well down on the month.

DXY gave up 0.49%, exactly the same amount as last week. Forex was much flatter than usual, but the biggest winner JPY is an indicator the market is still nervous. CADJPY was the only pair to move more than 1%. NDX immensely outperformed SPX. The tech index was up 4.86%, and AMZNs move was outstanding. Of great note this week was the recovery of Ethereum, which has put on 66% in the last two weeks, its best since March 2017, long before the crypto bubble burst.

Monday December 31
Between railing at the Democrats about the shutdown, President Trump tweeted over the weekend that he spoke again to President Xi of China and [the trade] “deal is moving along very well” and “Big progress being made!”. Previous tweets in this vein have lifted the market.

New Year’s Eve falls on a Monday, as it did in 2012, 2007 and 2001. Traditionally this is the last day of the Santa Rally, and also of course the last day of the fiscal month, quarter and year, where any last-minute window-dressing (rotation of stocks to make fund holdings look good) takes place. However, it’s another pre-holiday, so expect lighter trading and surprises are less likely. The stock market is open all day, but the bond market closes at 1900. There is little news.

Tuesday January 01
New Year's Day and all markets are closed, so a bigger break than Christmas. Futures will open at 6pm EDT. The only news is from Australia, where it is of course Wednesday morning.

Wednesday January 02
Markets return today for the first day of trading in 2019, (except for Japan and New Zealand which remain closed a second day), although news is just a constant stream of Manufacturing PMIs. Traditionally it is an up day as institutions start buying for the new reporting year, but in this market, who knows. In theory, it is the start of earnings season, and 69 companies report, although the first reports on consequence are JPM. WFC and UNH on Jan 15.

Thursday January 03
The ISM PMI is the most important print of the day, and it is expected to decline, although last month’s print beat substantially. A similar decline (est 58, prev 60.7) is expected in the ISM Prices Paid report. The ADP jobs report is always watched to give an indication of Friday’s NFP. Like last week, the API oil report is two days late due to the holidays. Japan is closed for a third day.

Friday January 04
The biggest day of the week sees NFP, where estimates are a little lower than usual. We have this issue where markets are entering bear territory, yet US economic figures are quite good, and the Fed only works from the latter, despite recent strong pressure from the White House. An NFP beat has a strong chance of being taken as “good news is bad news” (and a miss vice versa), meaning it will confirm or delay rate hikes. Added to that Chair Powell joins a panel in Atlanta with previous Fed Chairs Yellen and Bernanke today. What he says will be watched very closely. Also on today are Fed members Mester at 1300 and Barkin at 1830. Like last week, the EIA report is two days late due to the holidays. Japan’s markets open for 2019.

Unusually, there are Saturday speakers this week, Fed Williams at 1300 and Bostic at 1515.