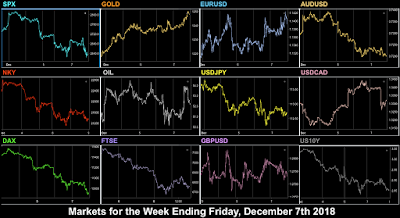 Monday Dec 03
Markets seized on remarks following Trump/Xi meeting at the G20 Conference in Buenos Aires as a softening of the trade war. The US said they would suspend new trade tariffs for 90 days. Equity markets gapped up. The SPX added 1.5%, its largest weekend gap up in 18 years. The gains were however eroded throughout the European and US sessions although all indices still posted a green candle, albeit a doji. The other big news of the day (which also helped equities) was Russia confirming it would co-operate with Saudi Arabia on production cuts. The black gold added 4.82%, its best day since Jun 22nd. Also there were more encouraging reports from Italy about budget compromise, and BTP yields fell.

However, around 1800, the US 3-year bond yield fell below that of the 5-year note. Although most focus is on the 2 and 10 year bonds, this inversion was seen as a warning sign by markets. The two times this happened were in 2001 and 2006, shortly before bear markets emerged. This is what quashed what would otherwise have been a very positive day and start to the traditionally strong ‘Santa Rally’ month of December.

DXY fell 0.2% on the day. It would have been more except that GBP, after a good start, fell sharply on concerns that British PM May will not get her Brexit deal through Parliament. All other currencies were up (JPY was nearly flat, being pulled between risk-on equity strength and the weaker dollar). Gold was up and 10-year yields were down in line with the weaker dollar.

Tuesday December 04
Equity indices had a firm Turnaround Tuesday, as SPX fell 3.2%, its worst day for two months. This was of course partly due to the large ‘air pocket’ from the record weekend gap up, and concerns about the reality of the thaw in trade relations (in the absence of follow-up news), but the main driver was that shortly after the markets closed on Monday, the 2 year/5 year curve also inverted in the futures market, and this was confirmed when the cash markets opened. Note that all yields are now falling, it is that longer term yields are falling faster than shorter term ones. The main worry is the that the 10y/2y yield will invert. At +0.128 it is already the lowest since June 2007, when SPX topped four months later, and then went on to lose 57%. Also the SPX made a ‘death cross’ (where the 50-day moving average falls below the 200-day for the first time since

Other indices also fell hard, but the FTSE fell the least, due to a fall in GBP after the British government was found in contempt of Parliament for not publishing Brexit legal advice (which confirmed that the EU had sole control of the ‘’backstop’ exit). This was after an earlier rise like the day before. There was similar pattern in EUR (also affected by Brexit of course), and CAD and AUD were also down, but a sharp 0.8% appreciation in JPY as equities fell left DXY more or less flat. Oil was slightly down, and Gold slightly up in line with JPY. 10-year yields fell sharply, in line with the short-term inversions, giving up 8bp on the day.

Wednesday December 05
US equity and bond markets were closed today for the funeral of President GHW Bush. The day’s economic releases were also postponed, and SPX futures actually managed a small gain. DAX was flat on the reduced volume, and FTSE was slightly down as GBP rose after the ECJ confirmation that Brexit could be reversed by a simple withdrawal of the Article 50 notice, meaning ‘no Brexit’ is actually possible. Needless to say this is along way from a Brexit softening, and for the third day in a row, a spike up faded.

DXY was flat again today, with advances in EUR and GBP being balance by a weaker JPY and a sharp drop in CAD to an 18-month low on dovish remarks (no inflation, no rate hikes) from the BoC following the rate hold at 15:00.  The loonie instantly spiked down 100 pips (0.77%). AUD (not part of DXY) was also sharply down after the substantial miss (2.8% vs 3.3%) on GDP. Gold was flat, and Oil managed a small 0.6% advance, with price action similar to Tuesday. The bond markets were closed.

Thursday December 06
Today the CFO (and daughter of the CEO) of controversial Chinese comms vendor Huawei was arrested in Canada under US orders on potential Iran sanctions violations, causing semiconductor ETF SOXX to gap down 2.8%, although it later partly recovered. SPX gapped down 1.35%. All indices followed a similar pattern, recovering but still ending the day in the red. At the cash close, DAX, FTSE and STOXX were over 3% down, at two-year lows. STOXX had its worst day since June 2016. There was a slight improvement in the yield curve, 2 year paper fell 5bp, whereas the 10 year bellwether only fell by 4bp, which may have mitigated the US losses. 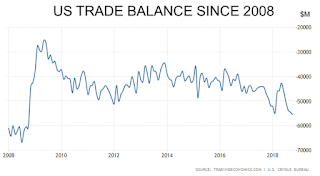 Another sentiment factor was the US trade balance print came in as a miss (-$55.5Bn vs -$54.9Bn). This release is not normally significant, but the figure was marginally worse that the Feb 18 print ($54.9Bn), before the trade war started, and thus the worst imbalance since the 2008 crisis. The implication of course is that Trump’s tariffs were supposed to narrow the trade gap, yet it has been getting worse every month since May this year.

We finally saw some dollar movement today, with DXY down 0.23% after a strong showing from EUR and GBP, following rises in German and British bond prices, and of course JPY in line with equity fade. Risk currency AUD however was down for a second day. EMs also suffered with ZAR, RUB and BRL notably down. Oil also fell (2.3%) despite the EIA beat at 15:30, but Gold was flat, as was CAD, holding yesterday’s move (despite misses on Trade Balance and Ivey PMI) in anticipation of the simultaneous US/Canadian NFP reports.

Friday December 07
The relief today in the Oil market which leapt 4.85% on OPEC cuts confirmation was short-lived, and it ended the day a mere 0.81% up. The equity sentiment was dampened further by reports from Trump advisor Navarro (remember him, the China hawk) saying the US would definitely push ahead with the tariff increased if Washington and Beijing could not agree a truce in the 90-day period mentioned above. The 10yr/2yr bond yield narrowed by 2bp, as the shorter note faded 4bp. Then to add to this, US NFP missed at 155k vs 205k estimated, although the AHE figure, which we have said many times is more important, printed in line with the estimate of 3.1% YoY (reminder: US YoY CPI is 2.1%). As you would expect markets fell substantially, with SPX giving up 2.3% to post its worst week since March, and its worst December Friday since 1932. AAPL filled the May gap, and moved into negative territory for the year as did DJIA. DAX and NKY followed suit downward, with only FTSE trimming losses to 0.35% on weaker GBP and stronger Oil.

DXY was down 1% on the day, as EUR advanced despite the Eurozone GDP miss at 10:00 (of course Eurozone stats are usually priced in, as the individual countries report beforehand). GBP followed the pattern it has done all week, only this time the fade of the rally took an extra day. These near-100 pip moves in sterling are related to the constant flow of good and bad Brexit news, more pronounced since BoE Governor Carney firmly linked the rate hike path to the degree of soft or hard exit. JPY and CAD hardly moved, but the winner of the day was CAD, which fully retraced (as it often does) Wednesday’s fall after the stellar jobs report (94.1k vs 11k, 850% over estimate, and equivalent to 847k in US terms, adjusting for population). Canadian unemployment also beat, and CAD instantly reversed the 100 pips it (instantly) lost on Wednesday. It was helped also by the Oil move, but being a risk currency like AUD, there are still pressures against it. This kind of move happens a lot with USDCAD and there is not usually a stop-hunting reverse spike, nor is there a quick reversal, which makes this event very easy to trade. Gold was up $11 (0.88%) in line with both the weaker dollar and a week of risk off, to finish at a five-month high of $1,248.

On Saturday, China released a stellar trade balance beat ($44.74Bn vs $34Bn est), a new 2018 high. The trade balance has been increasing steadily over the last five months. Taken together with the US decline over this period, it makes you wonder how effective the Trump tariffs are.

No Santa Rally yet! After last week’s brief respite, markets continued their slide down, with NKY the worst performer. A much quieter week for USD saw both gains and losses (The strong Euro resulted in a 0.43% softening of DXY). Selling AUDJPY would have netted you 2.16%. Cryptos continued to plunge to new 15-month lows. NDX gave up 4.76%, and some of the FAANGs did even worse. Outside cryptos, shorting NFLX (which still has a PE ratio of 69.3) was the best trade of the week.

Monday December 10
There may be some GBP movement following Sunday’s Brexit debate between British PM May and opposition leader Corbyn. The formal election of Annegret Kamp-Karrenbauer to replace Angela Merkel as CDU party leader takes place. The UK GDP print will probably be ignored as all GBP traders care about at the moment is Brexit. There is also Chinese trade balance data released at weekend.

Tuesday December 11
All eyes on the UK today for the crucial Parliamentary vote on Brexit around 1900. The British Conservative government, you will remember do not have an overall majority after the disastrous June 2017 election, and it is widely expected their motion to pass the current plan will fail (a surprise win would boost GBP hugely). This could lead to PM May resigning (to be replaced by a hard Brexiteer?), a successful vote of no confidence and subsequent snap election, or a second referendum, which in turn does or doesn’t have ‘cancel Brexit’ as an option. All options will have a strong effect on markets.

Wednesday December 12
The US CPI print at 1330 is the most important release of the day. A slight uptick is expected, but anything to the downside could affect next week’s anticipated hike, and therefore USD pricing. The Fedwatch likelihood of next week’s hike is already down to 71% from 82.7% on Nov 30th, so a hold is a definite possibility. There are also CPI report from Sweden, India, and South Africa, and rate decisions on PHP and BRL. Mexican markets are closed.

Thursday December 13
Back to Europe today for German inflation and then the all-important ECB statement at 1245 followed by the usual press conference 45 minutes later. This month is when the bank is due to end its three-year €2,600Bn QE. Commentators are however leaning towards a dovish rhetoric from ECB President Draghi. There are rate decisions on TRY, PHP and PEN.

Friday December 14
The US retail sales figures today are less important, as this print is a CPI proxy, and the actual inflation figure was published two days earlier. Today is the last session of the US Senate in 2018. ECB Lautenschläger speaks at 0930. There is a rate decision in Russia, a 25bp hike is expected. Turkey is due to get a new Fitch rating today.