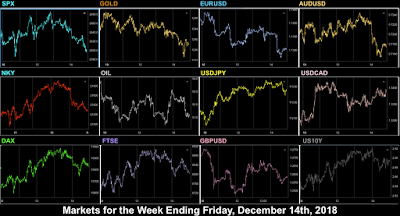 Mon Dec 10
Markets pulled back hesitantly from last week’s low, with SPX and foreign indices posting modest gains. However, there was a sharp slide at the open, led by AAPL on news that China had imposed a ban on most iPhone models, and the recovery came too late for the European cash indices which closed red, only recovering in futures trading after 1630. The dollar was firmly up with DXY adding 0.49%. against all currencies and Gold after the miss on Chinese inflation. Only AUD held its own and closed flat. Oil was down 2.4%. Adding to the woes, the two-year/ten-year US Treasury bond yield narrowed by 1bp as the short-dated paper advanced against a flat 10-year.

Tuesday December 11
Equities rallied at the US Open today on hopes that the US-China problems are progressing, with a reduction of Chinese auto tariffs, and a tweet from the President, but mostly evaporated after he threatened a government shutdown (yes it’s that time of year again) over his Mexican wall funding. Nevertheless, all indices posted a slight rise on the day, more so outside the US. DXY was up again, 0.28% today, as GBP hit a fresh 20-month low as the UK parliamentary vote on Brexit was cancelled, and PM May faced a vote of no confidence (despite the average earnings beat at 0930), and EUR was down on reports that the measure proposed to stop French public protests may breach EU rules. Of the major currencies (and Gold, down $2), only AUD was up on the day. Oil had a Turnaround Tuesday, erasing some of Monday’s losses. Ten-year yields rose 2bp, but the 2/10 gap narrowed another 2bp.

Wednesday December 12
Volatility by tweet is the defining change of the Trump era, and so it was today. An early missive from the world’s most influential Twitter account suggesting he would intervene in the Huawei case if it helped trade sent markets sharply up, in particular the SOXX ETF (and NDX) which fell sharply last week on the arrest. However, just like the day before, the market sharply gave up most those gains in late US trading, as the confidence vote in UK PM May drew near. Notably the DAX did not pull back, buoyed by news that Italy may be backing down on their illegal budget.

The greenback took a breather today, with DXY giving up 0.39% as EUR welcomed the Italian news, GBP approved on the confidence vote win by the PM, and JPY retreated on the earlier risk-on news. CAD was also up, and AUD enjoyed a third day of gains. Gold was up $3 in line but Oil faded after the EIA Stock miss at 1530. Some good news in bonds as well, the 2/10 yield curve widened by 3bp, as the shorter note was flat.

Thursday December 13
Markets turned today, and all equity indices (except Italy’s MIB, for reasons stated above) posted red candles, as US-China optimism faded as it often does when the mercurial President’s tweets are not followed through with any official statement. Also depressing the market was the lowered growth and inflation forecasts from ECB President Draghi at 1330. The subsequent Euro fade was matched by rally in GBP as Theresa May held on to her job. There is no more optimism about Brexit, but if she had lost the confidence vote of her own MPs, the danger is that she would lose one from the opposition, forcing a general election so close to Brexit day.

Despite the turn in stocks, JPY continued its downward slide, but with a flat CAD, the net result of the EUR and GBP moves was also a flat DXY. Gold slid $3. Rumours of Saudi cuts meant Oil erased the EIA losses, and more, and closed 3.5% up on the day.

Friday December 14
A constant stream of economic release misses today (China Retail Sales at 0200, German/Eurozone and US PMIs, US Capacity/Production at 1415) accelerated the downtrend. SPX lost 1.79% and DJIA soften by 2.06%, over 500 points in a 24-hour marubozu, although volume was low. The DJIA underperformance was attributed to Dow stalwart JNJ losing 10% after reports that it knew its baby powder contained asbestos. No particular news item, just a drip-drip of negative sentiment. World indices followed suit.

DXY was up 0.35% today, touching 97.71, its highest point since June 2017, after the Retail Sales Control Group beat, the only bright spot in today’s data, but more to do with a depressed EUR and GBP for reasons stated above, and JPY was alone in currencies in posting a green day, in line with the risk off sentiment in equities. Gold and Oil were down in line with the stronger dollar, and the 10-year yield was down 3bp, and the 2/10 gap narrowed by 1bp. A miserable end to a miserable week.

Another negative week for SPX, although European indices recovered slightly, as did NIFTY. USD was up across the board, with DXY adding 0.73%, and NZD just pipping GBP as the weakest currency. FAANGS were mixed with a strong recovery from FB, but otherwise fairly flat performance. Cryptos continued their downward slide.

Monday December 17
As we move into the final week before the Christmas break, expect lower volumes as traders prepare for the break. This does not necessarily mean lower volatility, as we saw on Friday, when the DJIA 500 point drop was made on very low volume. At any time this week, the results of the investigation into US auto tariffs should report, which in turn will affect tariffs going forward. Markets are closed in South Africa.

Tuesday December 18
There is a major speech by Chinese President Xi today make the 40th anniversary of China’s major reforms. Traders will be watching for any comments about the trade war. There is a rate decision on HUF (hold expected). 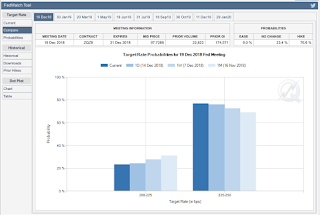 Wednesday December 19
The next rate hike is expected today although the CME Fedwatch tool only puts the likelihood at 75%, a probability that has been falling steadily over the last few weeks as markets fall. President Trump has already said another rate hike would be “foolish”. A failure to raise rates would surely depress USD and raise equities. The EU meets today to consider Italy’s latest budget proposal. The Central Economic Work Conference opens in China, to discuss economic policies for 2019. There is a rate decision on THB (hold expected).

Thursday December 20
There are four rate decisions today, in JPY, GBP (11.9% of DXY), SEK (4.2% of DXY), and CZK, and all expected to be holds. The most important one is the Bank of England decision, and traders will be watching for any downgrade in the Bank’s forward growth (GDP) estimates. The risks to sterling are to the downside. Turning to Japan, there is no outlook report accompanying this decision, so volatility is expected to be limited. Australia’s jobs report is due, and will contain the mix of part-time and full-time jobs, growth in the latter seen as less significant.

Friday December 21
Today is the government shutdown deadline, which Trump has threatened if he doesn’t get his wall funding, although notably, he has left himself a way out in a recent tweet where he claimed that the new trade agreement effectively paid for it. Interestingly a report is due today on the extent of foreign (read Russian) meddling in the mid-terms. Today is the last full trading day before the Christmas holiday, and some traders may be absent for the rest of the year, so end of year rebalancing and ‘window dressing’ may start today. The GDP and PCE releases are important, particularly the latter as for once, the MoM, QoQ and YoY are all released together (usually, the QoQ is a day earlier than the others).

Next week is Christmas week, the biggest holiday of the year in the US and Europe, and we wish you a happy one. Nevertheless there is half a week of trading, albeit in low volume. We will report as usual.