Virus deaths pass 100k, Nevertheless markets up, dollar down, Bernie drops out
MY CALL FOR THIS WEEK : SELL USDCAD

A four-day week where we saw equity markets surged on a slowing down of new COVID-19 cases in the US, a positive view from adviser Anthony Fauci, and more significantly in European countries ahead of the US curve, followed by further Fed stimulus up to $2.3 trillion to keep the economy on track. The stimulus of course had an effect on the dollar, down across the board. Yields initially rose with the Monday 7.5% rally but were capped by dollar weakness. OPEC duly cut production by 10%, but this was already priced in, and traders deems it to be insufficient, given the projected economic contraction due to the virus, and the Oil price collapsed again.

Next week is a new chapter. The long weekend will provide three more days (four in Europe) of new case data, probably confirming the continued decline of new cases, and the US experience can be extrapolated from this. Sometimes there are advantages to being last, and we can probably echo Winston Churchill in saying this is not the end, not even the beginning of the end, it is however, the end of the beginning.

Save any upsets good or bad in the medical situation, price action this week is likely to be primarily determined by earnings, with a good cross-sector sample (DAL, JNJ, UNH, AMD) in addition to the banks. Bank stocks have fallen much more than their earnings estimates would suggest, and the degree of PE ratio reversion will give a strong indication of medium-term market sentiment. 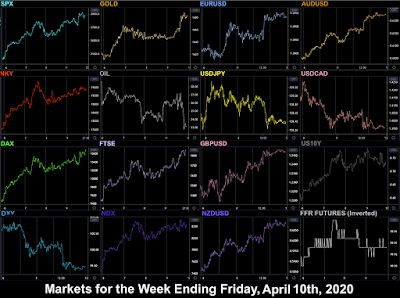 Mon Apr 6
Markets surged today after the doldrums, with SPX recording its sixth best day this century (two of the better days were in March). This was on increasingly clear evidence that the early countries in the curve were definitely seeing a tail-off in new cases, and that the US was sufficiently equipped to handle their curve. There was also a technical aspect in that the 38.2% retracement was breached, leaving the next barrier at 50%. SPX was up 7.5% on the day, its sixth best day of the century, and third best during this current crisis. The dollar had a quiet day, with only AUD and NZD notably reversing from their lows. Oil was sharply down after the postponement of the OPEC meeting, wiping out some of Friday’s gains. Gold continued to be counter-intuitive and was up 2.33% on the day. Bonds and JPY were however in line with the equity surge, both fell.

Tuesday April 7
Today was fairly flat as indices held onto Mondays gains. The virus stats were slightly positive, as the US reported a drop in new cases. USD however was sharply down as traders considered the effect of the Fed’s unprecedented loosening, with EUR leading the gains as new cases in Italy and Spain continued to fall. Gold reversed slightly, as did bonds, but Oil fell sharply again as traders were concerned about the OPEC delay, suggesting agreements had not been reached.


Wednesday April 8
Markets today welcomed left-wing Senator Sanders dropping out of the Democratic Presidential race, leaving the field clear for Joe Biden. Today was the turn of USD to be flatter, with a slight move down in EUR matched by a move up in GBP. We can’t really assign any reasons to this, other than technicals. Gold and bonds were down again, as was JPY reflecting the holding of Monday gains. Oil was sharply up, despite the EIA stock being worse than expected.

Thursday April 9
On the final day of the short Easter week, the Fed announced yet further stimulus to prop up the economy, and additional $2,300Bn including $1,200Bn in the so-called junk bond market. This inevitably boosted stocks, although only by about 1.5%, although this was enough to close as the best pre-Easter week since 1974. The muted response was not helped by another 6.6 million new Jobless Claims, and the Michigan Consumer Sentiment index falling to 71, a level last seen in the 2012 Euro crisis.

The easing caused an immediate and sharp drop in USD across the board, and the depression in 10-year yields had more effect than bond-stock rotation. CAD was down on the all-time low of -1.01 million new jobs, an amazing number equivalent to 2.7% of the population. Gold was up on the weaker dollar. Separately, OPEC announced cuts of 10mbpd (approximately 10% of output), but this was seen as not enough given the reduced demand from the crisis, and Oil crashed again.

Friday April 10
Equity, bond and commodity markets were totally closed, including futures, the only exception being NKY which rose slightly. Forex as expected was very quiet, the largest move being USDCAD, down 0.26%. Next week, European and Australian markets will be closed on Sunday. Earnings season starts on Tuesday with the big banks reporting, which may quantify some of the projected damage from the virus crisis.

WEEKLY PRICE MOVEMENT
DJIA was up 12.67% this week, its second best week since 1938 (the best was two weeks ago). The best forex trade was to buy AUDUSD, up 5.88%. Bitcoin hardly moved, and ETH moved less than the Dow. My call to buy GBPJPY paid off, up 1.57%. The running total after ten weeks (and five wins) is 4.06%. This week I am selling USDCAD based on the technicals, and also the weekend oil deal. 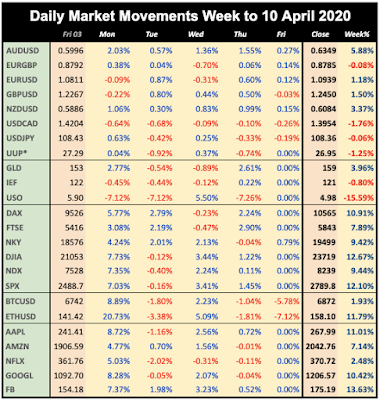 NEXT WEEK (all times are GMT)
(Calendar High volatility items are in bold)
Everything is about earnings this week, so we have done a table of the major earnings releases this week, highlighting the reduced forecasts, and the current price. The final column shows how much more the price has dropped than the earnings estimates suggests it should have. As you can see from the final column, most companies have dropped further, ie their P/E ratios have fallen. 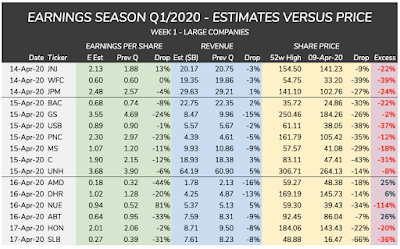 This is immediately visible in a column chart

We will fill in the actual moves this week and report next weekend, together with the following week’s earnings releases.

Monday April 13
Over the weekend, a new oil cut deal was announced, so expect volatility in the Oil price, as well as CAD and oil producers. Most countries except Japan and the US are closed today for Easter Monday. There is a rate decision in Romania (who celebrate Easter a week later). There is no significant news, but watch out for COVID-19 updates
02:00 CNY China FDI (time approx)

Tuesday April 14
Two DJIA giants open earnings season today, JNJ and JPM report, along with WFC and small bank FRC. It’s a quiet news day, although Chinese stats are always interesting at the moment. There is a rate decision in Indonesia.

Wednesday April 15
There could be some movement on CAD today with the rate decision and the Oil stocks print, but more important are the raft of banks reporting before the bell.

Thursday April 16
After two weeks of over 6m Initial Jobless Claims, traders will be looking for the curve flattening on this statistic as well. However once again, earnings will probably be the most important factor in price today.