Coronavirus is everything, Worst jobs reports ever, Worst quarter in history
MY CALL FOR THIS WEEK : BUY GBPJPY

In a week where the epicentre of COVID-19 moved from Europe to the US, as signs of flattening were seen in Italy, markets closed their worst quarter in history. Volatility is inevitably declining after the record-breaking moves of the last few weeks, but new records are still being made.

The slight ‘green shoots’, such as a flattening of the curve in Italy coupled with a much more serious approach in the US meant that the week was flat overall, and indeed just inside last week. This was despite huge misses on the weekly Initial Jobless Claims and NFP, both posting their worst numbers ever. A degree of ‘virus fatigue’ is setting in, where it seems this constant bad news is being priced in.

The dollar also had an inside week, recovering about half of last week’s losses. Oil had its best day ever, on an announcement that President Trump had negotiated a cuts program with OPEC.

Next week is expected to be more of the same, although increasingly, traders are looking to quantify the scale of the disaster. Some more March economic releases may provide some clues, for example the US Initial Jobless claims. It may be of course that with the Easter holiday, the ball is kicked down to road into earnings season next week. 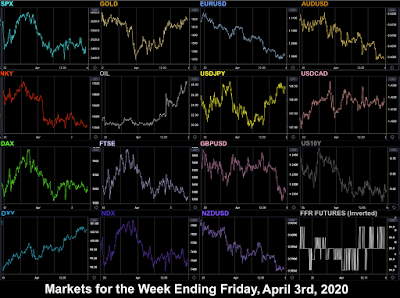 Mon Mar 30
After gapping down on Monday, something that has been happening a lot, markets continued their rally from Friday. All indices were up, as President Trump was seen to have taken charge of the crisis and JNJ (up 8%) said it had identified a candidate for a coronavirus vaccine. The dollar reversed course from last week, and was up against all currencies. Surprisingly, Gold and bonds were up, and Oil down.

Tuesday March 31
Markets gave up Monday’s gains today, as the recovery rally stalled. There may have been some end-of-month profit taking. Things were not homogenous, as bank shares slipped but tech shares closed green. Nevertheless DJIA was down 1.84%, only a small move by current standards. Bonds were up in line. and Oil was flat. Unusually gold was sharply down 3.18%. There seems little connection between asset classes in these volatile times. The dollar pulled back slightly, although its main rival EUR was flat, and weak currencies AUD and NZD were down.

The quarter closed as the worst ever for stocks both in points and percentage.

Wednesday April 1
President Trump talked today about a “very very painful two weeks”, and the projection for the US coronavirus deaths is between 100k and 240k, and markets fell again, ignoring the mild ADP print of only -27k jobs. Of course, as sentiment is fairly consistently negative, technicals come to the fore, and the reversal may well have been linked to the 38.2% retracement line reached on Tuesday, which acted as resistance, as shown here. There was a little bit of haven correlation with Gold and JPY outperforming the dollar (which rose against everything else). Bonds were also up in line. Oil rose, despite the large miss on EIA stocks. Perhaps even more was anticipated, as estimates are being largely disregarded these days.

Thursday April 2
Markets today showed a slight recovery from yesterday’s pullback, and made a second failed attempt at the 38.2% line, despite the shocking 6.6 million Initial Jobless Claims, over double last week’s then record print. The dollar rose again, as EUR continued its downward trend although GBP and CAD were flat. Today was the week in microcosm for currencies, you can see from the main chart that EUR, AUD and NZD trended down all week, whereas GBP, CAD and JPY were more ranged. Gold was up slightly, and bonds were flat. The big story was Oil, which had its best day for decades after President Trump announced that he had persuaded OPEC to make cuts. The narrative now moves to next Monday’s online OPEC meeting.

Friday April 3
The final day of the week was relatively mild. as markets stayed within a narrow range and fell about 1.5%, almost flat by current standards. The dollar made a clean sweep up against all currencies, even JPY. Gold and bonds were flat in line. The Oil euphoria continued with the second best day in decades, and the up 32%, its best week ever. The notable point is that all indices had their least volatile week since the crisis began.

WEEKLY PRICE MOVEMENT
The biggest index move was NKY, down 8%, very de-correlated from other indices. The largest currency move was EURUSD down 3.19%. Cryptos were up after weeks of flatness. I was caught out by President Trump’s surprise announcement on Oil, which spoiled my call to buy EURCAD last week. It was down 1.41% moving my running total to 2.49% after nine weeks, with four wins. This week’s trade is to buy GBPJPY. (My other calls last week were 50/50, SPX
went down, but Oil, as I say went up). 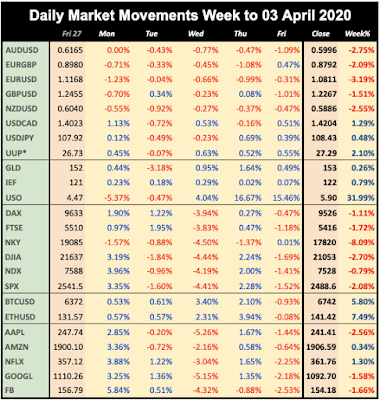 Friday April 10
Markets are closed in the US, Europe, and most of the western world for Good Friday. Despite this the important US CPI releases, which is for March is another piece of the coronavirus damage jigsaw.