In a week dominated, for once, by the collapse of the oil market, and the first time ever that a contract traded at a negative price in the hours prior to expiration, the earnings picture, although mixed overall, was far from disastrous, and as oil recovered, so did equities, and started to form a shallow V-shaped inside week. This was halted mid-session on Thursday with a report that, contrary to expectations, the GILD drug remdesivir had not been successful in COVID-19 trials.

Haven assets also lost volatility, especially USDJPY which was virtually flat, although the ECB move (following the Fed) to buy lower-rated bonds caused a clear move out of EUR, resulting in an second week of uptick in DXY.

Next week sees the scheduled Fed rate decision, but with a rare 100% hold priced in, and of course the recent tendency of the Fed to abandon scheduled decisions, it is probably the least important meeting for years. US preliminary QoQ GDP (-4%) and ISM PMI (36.7) are sure to be dire, and the new jobless claims estimate at ‘only’ 3.5m (previous 4.4m) is the only reversal expected. The most important week of earnings season has over 660 companies reporting. It delivers the rest of the FAANGs and MSFT, and Dow giants BA, V, MCD and CVX. Plenty of results and guidance to possibly resolve the apparent disconnect between price recovery and the continuing pessimistic clinical outlook on the COVID-19 crisis.

SPX was fairly flat and posted an inside week last week and it is interesting that actual earnings did not move the variance from pre-COVID prices very much. The final columns effectively chart the movement in P/E ratio, generally down, but for example AXP now seems overpriced. 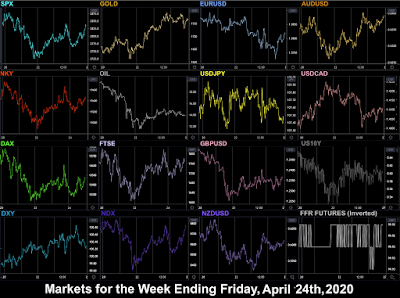 Mon Apr 20
The big news today was something that has never happened before in all history, the May contract for WTI crude (which expired the next day) actually went negative, closing at minus $37.63 a barrel. The press buzzed with explanations of what this meant. Oil stocks plunged, but outside that sector, things were fairly calm, and indices were around 2% down, depending on their Oil exposure, for example oil-free DAX was up 0.47%. FTSE was up but by less than amount GBP was down. CAD, an oil proxy was sharply down but with a flat Euro, DXY only advanced a modest 0.33%  Gold and bonds were in demand and advanced.

Tuesday April 21
Another down day as pressure moved onto the June oil contract, which fell over 70% to a low of $6.50, triggering circuit breakers, before recovering slightly into the close. Trading in the USO ETF was halted after its worst day in history. Monday night’s poor results from IBM, with profits down 61% also cast a pall, and indices fell 3-4%, this time with NDX and DAX faring worst. In currencies, money move out of commodity currencies, although as EUR and JPY hardly moved, the DXY gain was again muted. Bonds advanced again, although Gold gave back Monday’s gains, showing once again that it is an unreliable haven.

Wednesday April 22
Strong results from lockdown immune NFLX and SNAP the night before, and more significantly a huge 19% recovery in the June contract price (which does not show in USO in our table) halted the slide, and markets were up across the board. After an early pullback, USD advanced again, mainly because EUR capitulated after two flat days. Bonds were down in line with the recovery, but once again, Gold followed the equity markets rather the inverse.

The V-shaped week for equities was doing fine until a report on the GILD drug remdesivir did not actually help with COVID-19 after all. SPX quickly dropped by 80 handles, and closed Thursday less than two points apart from the previous Thursday’s close before the GILD bump up, giving a flat day overall.  It was a similar situation with the dollar, which had also been rising rapidly and also felt the same dip, and only a similar dip in EUR kept DXY flat. Oil continued to rally and this was reflected in CAD. Bonds were flat, and Gold was once again up.

Friday April 24
The last day of the week started badly in futures, but then quickly accelerated as oil stopped falling. Tech shares outperformed with NDX up 1.68% against 1.11% for DJIA. This still led to a red week overall in all indices.  The dollar was generally down with only CAD underperforming. Bonds were again flat, and Gold was down in line with equities.

WEEKLY PRICE MOVEMENT
The weakest indices were NKY, then DAX but this mainly reflected their inability due to timing, to participate in Friday’s rally. GBPAUD was the weakest currency down 1.42%. Cryptos started to show a little bit more volatility, whereas FANGS were lacklustre with the exception of FB, up over 6%.

My call to sell EURCAD failed. I had not expected Oil to crash for a second week, and I was still doing well until Friday. The pair was down 0.21%, so twelve weeks, five wins and a running total of 3.52%. This week I am selling NZDJPY. 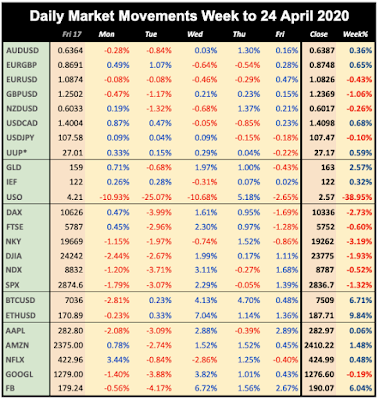 For the third week, we offer a table of major earnings estimates against current prices. As you can see, unlike Week 1, quite a few companies have now recovered more than their earnings suggest. 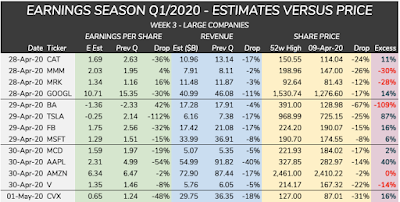 Monday April 27
Entering the final week of the month, with no sign of new COVID case reduction in the US, markets will be looking for economic lockdown mitigation strategy. Watch out all week for another oil collapse. DAX giant Bayer reports today. Markets are closed in South Africa.

Tuesday April 28
We have not heard much from Japan in relation to the COVID crisis, and so today’s BoJ scheduled decision provides a opportunity to possibly hear something different. However, earnings will dominate today, with CAT, MMM and MRK (together 9.88% of DJIA) before the bell, followed by NDX giant GOOGL, along with AMD after the bell. There are rate decisions in Hungary and Sweden. SEK is 4.2% of the DXY basket.

Wednesday April 29
The Fed decision today, where for the first time in years, a hold is 100% priced in, will probably be of little interest, especially given that central banks have more of less abandoned keeping news to scheduled dates during this crisis. So it will be an earnings day with troubled aviation giant BA before the bell, once top of the table it now languished at 11th position. After the bell, top NDX stock (11.71% alone of the index) MSFT reports, along with FB, TSLA, QCOM, and a host of smaller companies (EBAY. ALGN, VRTX, BMRN, ADP, QCOM) to make a total of 20.46% of NDX by weight. Markets are today in Japan.

Thursday April 30
The early focus on European macro issues, with the ECB statement and presser following a triple Eurozone report (GDP, inflation and unemployment all in one go). The ECB is already set to spend $1trn on asset purchases this year, will that be enough, is the question President Lagarde is sure to face.

Earnings before the bell include two large airlines AAL and UAL, and Dow #4 position MCD (5.31% of the index). But once again, the big news is at the end of the day with AAPL and AMZN both reporting, along with recently newsworthy GILD, and smaller NDX companies (KHC, WDC, ILMN  and SGEN), to make a total of 24% of NDX reporting simultaneously. Markets are closed today in South Korea and Hong Kong.

Friday May 1
Markets are closed for Labour Day in China, and most of Europe (including Germany) although not in Japan, the UK or the US. The only significant earnings today are three oil giants XOM, CVX and PSX all reporting before the bell, which may bring Oil back into focus. The all-important ISM PMI is predicted to print the lowest level since 2009, a dip below 35.47 would mean the worst figure since 1980. It is of course also the first day of May, the traditional time when markets sell off for summer. They did so precisely on May 1 last year, it remains to be see whether they will do so again.